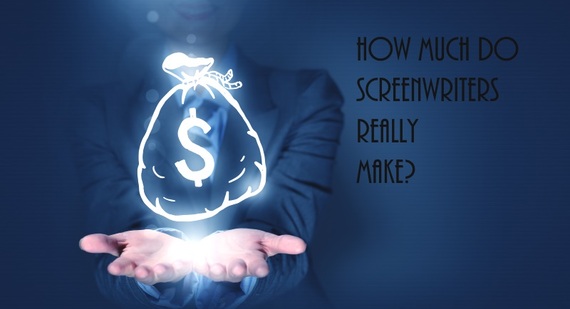 It's often a strong misconception that most screenwriters sell screenplays for millions of dollars.

We've all read the stories of Shane Black selling The Long Kiss Goodnight for $4 million, Joe Eszterhas selling Basic Instinct for $3 million, Tom Shulman and Sally Robinson selling Medicine Man for $3 million, etc. And sure, in the 2000s, before the financial crisis hit, we saw David Koepp selling Panic Room for $4 million, Terry Rossio and Bill Marsilli selling Déjà Vu for $5 million, Will Ferrell and Adam McKay selling Talladega Nights for $4 million, and Evan Daugherty selling Snow White and the Huntsman for $3.2 million.

Those are lottery type numbers to behold. Even the more "run-of-the-mill" deals that are featured in the trades on a more regular basis are awe-inspiring to most screenwriters. $400,000 against $200,000 (meaning that the writer gets $200,000 first and another $200,000 if the film gets greenlit) or any variant as far as six figure deals go. That's a lot of money. Screenwriters dream of getting that six or seven figure check handed to them.

First and foremost, to debunk this misconception, in many cases yes, those deals are very similar to the lottery -- but not as one would hope. Lottery winners are few and far between, considering the population of the world. It would be silly for anyone to invest their time and money expecting to win the lottery, right? The same could be said for screenwriters expecting to join the six or seven figure club.

During the screenwriting boom of the 1990s, those high six to seven figure deals happened more often than they do now. Studios and producers also optioned screenplays from screenwriters, which meant that a certain price would be paid to allow the studio or producer to have exclusive rights to try and develop, package, and either sell or green light (in the studio's case) the script. Screenwriters would often receive $5,000 to $10,000 for such option deals. However, since the financial crisis of 2008, such options are few and far between. Studios and production companies are much more frugal with their spending in the development phase. And on that note, selling pitches with no screenplay just doesn't happen anymore unless you are a successful and proven producer, director, showrunner, or screenwriter (to a lesser degree).

$200,000 doesn't come in a single paycheck, unless you are a high profile screenwriter that can demand such. Instead, it's separated into various installments. So a screenwriter that is lucky enough to sign a $400,000 against $200,000 deal isn't getting just one check in hope of a second. Many elements come into play thanks to very detailed contracts written by entertainment lawyers and aided by Guild regulations.

Instead, that screenwriter might get $50,000 up front for what the powers that be consider a first draft. Now $50,000 is a lot of money to be sure, however, you need to take into account the ten percent an agent takes, the five percent (or more) an entertainment lawyer takes for facilitating the contract on the writer's behalf, and then what the government takes as well. At this stage, perhaps the writer has a manager now too. That's advisable, but also costs another ten percent. So before taxes, we're looking at a possible take home of $35,000. Taxes may account for almost half of that, leaving the screenwriter with $17,000 give or take. Not much given the big numbers of the contract, right?

"But hey, that's just the first check." Well, it depends. Most contracts dictate that after the first initial payment, every other possible payment after that is for a draft of the script, meaning that for each further draft written (after notes are given by development executives, producers, directors, and sometimes talent), another payment is offered. Here's the rub. That screenwriter can be replaced at any time. So even if they write a second draft, get that second payment, have all of those deductions taken away from that amount, the powers that be could decide that maybe the script they bought needs a new writer. The payments then stop there. No $200,000.

Now this is the broadest of examples with very general numbers for the purpose of making a point, however, it rings true all too often in big contracts, as well as smaller ones, because there are different levels of screenwriters. Those six and seven figure deals all too often represent just the top one percent of working screenwriters in the industry.

A majority of the working screenwriters out there are making just five figure deals, the most successful of which are barely scraping that six figure barrier. Now imagine the same deductions taken away for a mid to high five figure deal.

In short, selling a script or being hired to write one is sadly not equivalent to winning the lottery.

Even selling a spec script -- spec meaning it's written under speculation that it will be sold to someone -- isn't a normal occurrence these days. Most of the time, such scripts are used as calling cards to get assignments for scripts that are already actively in development within studios and production companies. In those case, the pay and contract details listed above are generally the same, depending upon the stature of the screenwriter. Writers with more credits under their belt will get paid more. Others won't. And it also depends on if the writer is a guild member or not. Guild members are protected (or sometimes restrained) from the guild contracts with studios. Those contracts offer certain payment tops and bottoms, as well as certain payout periods. But again, remember that with every draft, that writer can be replaced.

This is just a broad and generalized view of what screenwriters really get paid for a feature film script, whether it be a spec script or an assignment. There are so many variances to behold.

Screenwriters writing independent films outside of the Hollywood system are usually not guild members, thus they can be paid anywhere from nothing to just four or low five figure deals. There are also many production companies making movies, even with name actors -- usually B or C list or below -- that are not affected by the guild restrictions as their projects are non-guild signatory productions.

Furthermore, screenwriters don’t share the same type of residuals that actors in Hollywood attain through guild contract regulations. There are residuals due to the screenwriter of any given guild signatory production, but they all too often don’t amount to much for most projects and the breakdowns and percentages are pretty specific overall. They can be found here.

Overall, becoming a paid screenwriter is certainly not the lottery 99% of the time. While screenwriters will continue to get to a level of comfort doing something they love, all too often those that will make it -- most don't -- will have to pay their dues and grind away. Such is the life of a screenwriter.