You have to wonder what our founders would have thought about what happened a week ago Tuesday when polls opened in six key states and only a small number of voters came out? While they may have been shocked, it is telling that we were not surprised. Low voter turnout is something we have come to expect and accept, particularly in primary elections. 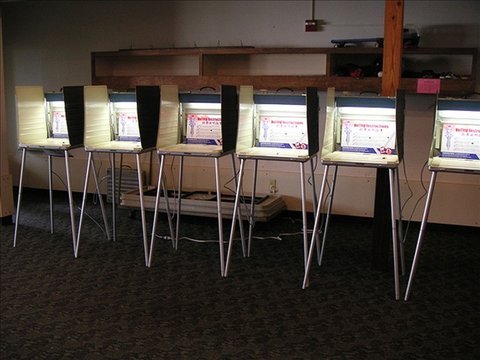 On Morning Joe the day before the election, Politico's Jim Vandehi quipped that there may be more candidates on Georgia's five-way GOP ballot "than there are people who will vote." He went on to predict turnout in the state was unlikely to reach 20 percent and sadly, he was right. Less than one in five registered voters went to the polls.

It wasn't only Georgians who stayed home. Voters in five other states were also given the opportunity to cast ballots. This includes voters in at least three states which are critical to determining the makeup of the Senate. Yet as the data shows, turnout was sparse even in states with hotly contested races.

Consider Kentucky, arguably home to one the most important Senate races of the year. On the Republican side, the race between Senator Minority Leader Mitch McConnell and Tea Party favorite Matt Bevin was billed as a referendum on the future of the GOP. Despite its import and the amount of media coverage it received, just 27 percent of Kentuckians went out to vote. What is even more surprising is that the Kentucky race looks like it is on track to be one of the most expensive in history, rivaling the Massachusetts race between Elizabeth Warren and Scott Brown two years ago in which spending topped $80 million. 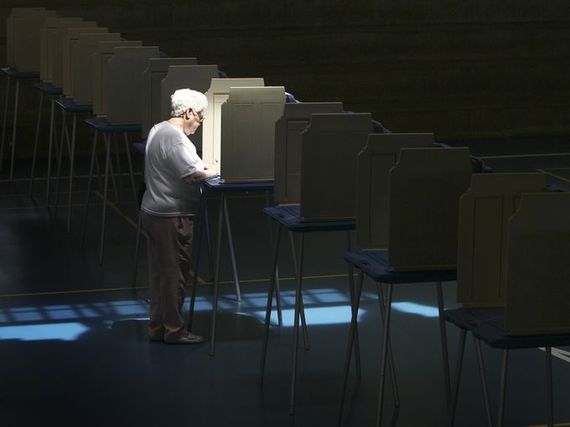 How is it that two states with such important primary campaigns in which large amounts of money were spent failed to attract more voters? How much are campaigns spending to get voters to the polls these days? 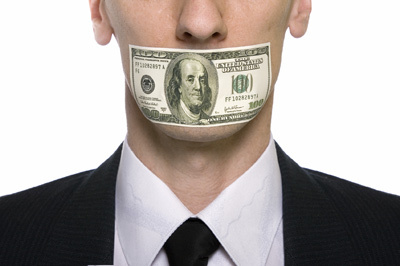 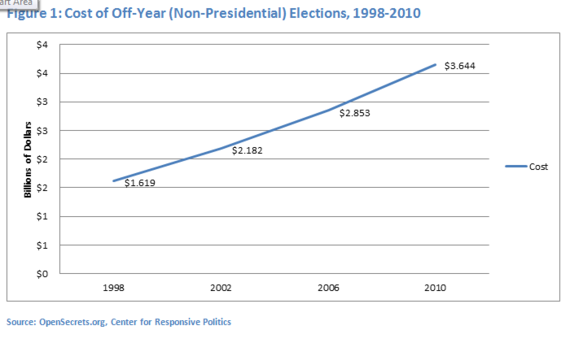 What has not been rising at the same rate is voter turnout. As Figure 2 shows, during the same period turnout increased a mere 3 points. So while spending on campaigns increased more than 100 percent between 1998 and 2010 (slightly lower if you account for inflation), turnout increased just 3 percent. 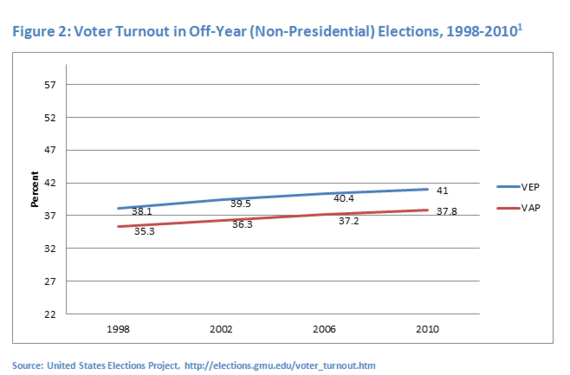 If just three or four out of every 10 Americans votes in an off-year general election, it is not surprising that even fewer cast ballots in primary elections like the ones we witnessed last week. Figure 3 shows that in five of the states that held their primaries on "Super Tuesday," turnout ranged from a low of 19.5 in Georgia to a high of 34.8 in Oregon with the average in all five states being just one quarter (25.4 percent). 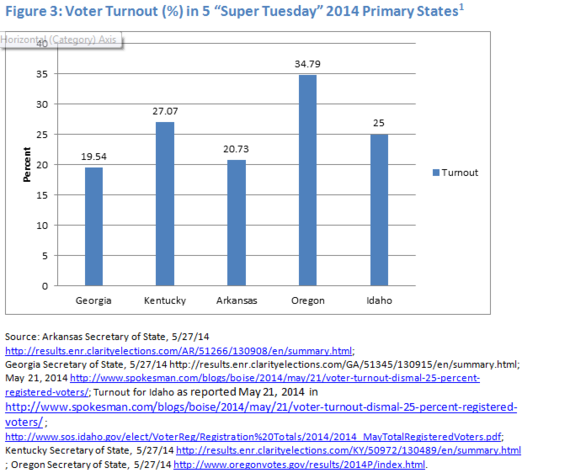 But in keeping with the general trend in American politics, stagnant turnout is not generally reflective of spending. As the data indicates, spending on these races ranged from just over $6 million in Idaho to $34 million in Georgia.

When looked at together, it becomes clear that those states in which the campaigns spent more did not necessarily see greater turnout. In fact, campaigns in Georgia spent just over $34 million on the primary but had the lowest turnout at 19.54 percent. Whereas campaigns in Oregon spent the second least ($8.165 million) and yet had the highest voter turnout (38 percent). In short, when it comes to this year's primaries the data so far show that increased spending does not necessarily result in greater turnout. 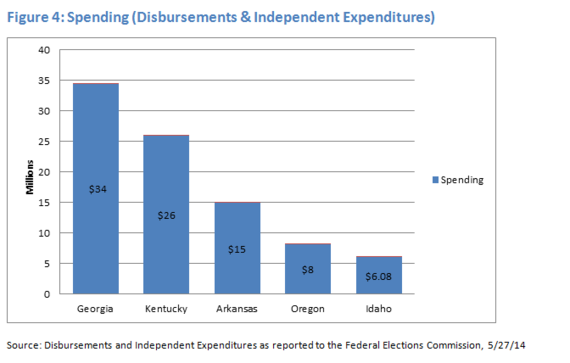 Another way of considering the connection between campaign spending and turnout is to look at how much it costs to get voters to the polls? Or looked at differently, how much are campaigns paying for each primary vote? In 2009, New York City Mayor Michael Bloomberg was widely criticized for spending an average of $185 for each of the more than 585,000 votes he received -- a figure which dwarfed the $112 he spent for each vote in his 2005 race and the $99 he spent for each vote in his first bid for office in 2001.

Spending per vote in these primaries is not nearly at this level. Then again, these are primaries in an off-year election. Moreover, this overview showcases the cost per vote by state as opposed to campaign. Nevertheless, the data show that the costs are significant and vary greatly by state - from a low of $11 per vote in Oregon to a high of more than $44 per vote in Arkansas. The average amount paid per vote in all five of the states combined is $30.82. 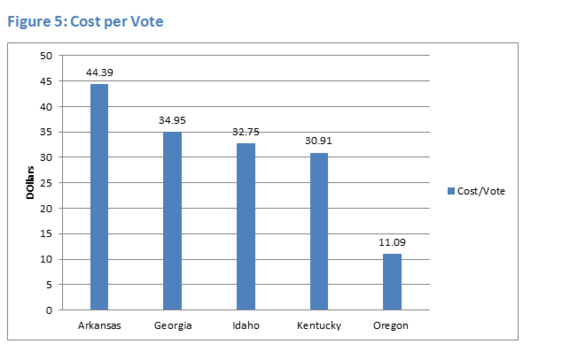 If the figures from these five states are even a rough indication, campaigns are spending an average of more than $30 for each primary vote. And for all that effort they can expect on average just one in four voters to show up at the polls on primary Election Day. Moreover, it doesn't appear that increased spending is doing much to increase voter involvement -- as evidenced by the fact that Georgia had the highest spending and the lowest turnout, while Oregon had the highest turnout and the second lowest spending.

If money is not spurring engagement, what other factors may help explain the discrepancy in voter turnout between places like Oregon and Georgia? Several factors can be considered, but one that stands out clearly is the difference in voting methods. In 1998 Oregon passed Ballot Measure 60 making it one of the few vote-by-mail states. Whether the ease with which Oregonians can cast a ballot helps explain why their turnout is higher than other states is worth considering.

Next Tuesday voters in eight more states including Alabama, California, Iowa, Mississippi, Montana, New Jersey, New Mexico, and South Dakota head to the polls. We expect that turnout in these contests will once again be relatively low. What will be even more interesting is whether campaign spending levels correlate in any meaningful way with voter involvement? If not, it may be time to ask ourselves just what does get voters engaged in the process?