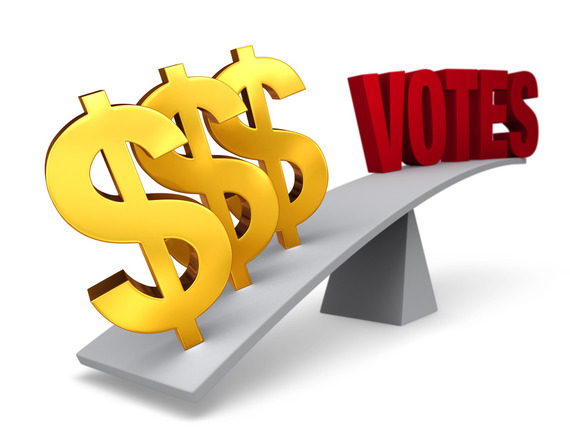 In 2012, Obama and Romney spent $11.75 per registered voter during the election, reports, El Toro. Despite the decline of broadcast TV, more than half of the campaigns' advertising budgets got dropped on TV ads. And thus far in this election cycle, the pattern continues. While digital ad spend is expected to top $1 billion this election cycle, that's still nothing compared with broadcast TV spending. TV ads will cost all 2016 campaigns an estimated $5.8 billion or 51 percent of their total spend, reports Borrell Associates. With evidence clearly showing that TV ads simply aren't worth their high price tag, a larger percentage of this money would be better allocated to digital advertising.

Political TV Ads: No Longer Worth the Cost

Think about a typical night in front of the TV: how closely are you paying attention? Between second screen distractions (smartphones and computers) and on-demand streaming services, TV ads are unlikely to be viewed at all. Technological advances make it easier than ever to ignore TV ads; tired of seeing yet another Hillary Clinton, Donald Trump or Ted Cruz ad? Simply hit fast forward. TV channels are saturated with major political advertising buys partially because of the "equal time" rule. This rule states that if a station allows one candidate to buy a 30-second ad slot, then all other opposing candidates running for the same office must be allowed to buy competing slots. In short, an ad war ensues. This is especially true for folks living in hotly contested battleground states. Live in Georgia? Your state's electoral votes are likely going Republican. But just across the border in Florida, the state's votes could go either way, hence the onslaught of ads.

Are there any benefits to TV advertising? For less-known candidates running for local offices, TV ads on the local news could give these candidates a big name recognition boost. In general, however, the benefits of TV ads are extremely limited. Candidates end up engaged in an ad war, buying ads because their opponent did, rather than making strategic targeted ad choices. From Lyndon Johnson's "Daisy" ad and Reagan's "Morning in America" to George H.W. Bush's "Willie Horton" ad and Obama's "Yes We Can" ads, presidential advertisements have been a mainstay of public political discourse. That said, there's little evidence that the majority of ads actually sway voters. Ads are overwhelmingly negative, which only serves to further alienate voters from the political process. We still vote, but we do so almost out of frustration and with a sense of relief that the election process will be ending soon.

Are TV ads really worth this chunk of the budget, or would money be better allocated on digital advertising? Despite past iconic TV ads, in general, TV ads don't work.

"There's very little evidence that ads make much of a difference in a presidential campaign," political scientists Diana Mutz told NPR during the 2012 election. "Most people are shocked when they learn about what the likely effects are relative to the huge amount of campaign resources that gets poured into advertising."

Remember that stat of $11.75 per voter? Well, that's for every voter who turned out in every state, including plenty of states that say only a handful of political ads. If you look at the-spend-per voter averages in battleground states, the numbers are even worse. Close to $1 billion in ads means campaigns are spending about $1,000 per persuadable voter, reports NPR.

There's no denying that digital campaign spending is turning heads. While 2016's estimate of $1 billion is large, by the next presidential election in 2020, this number will is estimated to top $3.3 billion. Digital ads are playing a more integral role in politics. Reaching Millennials requires digital campaigns. Millennials spend 3 hours per day on their phones, which adds up to 47 days per year, according to El Toro. Additionally, targeted digital ads based on Internet protocols can grown name recognition and increase campaign awareness faster than TV ads alone.

Campaigns could also benefit by putting content marketing best practices to work for their candidates. Rather than hurling character attacks back and forth, what about using content to actually talk about the issues? (I know, that's a crazy idea, but it sure would be refreshing!)

Consider this idea from Brian Wallace, the Founder and President of NowSourcing: "Businesses have great success when they take complex issues, fact and figures and break them down into manageable, digestible pieces with infographics. Why aren't candidates doing the same for talking about health care, education or economic policies?"

I'd personally rather scan a fact-based infographic or even watch a YouTube clip than sit through another TV ad this election season.

It's a multi-screen world out there. From maximizing micro-donations on mobile channels to developing hyper-local content for grassroots campaigns or even a viral infographic political campaigns who choose to go digital are poised to get a far better bang for their buck on candidate and issue awareness than TV ads could ever deliver.