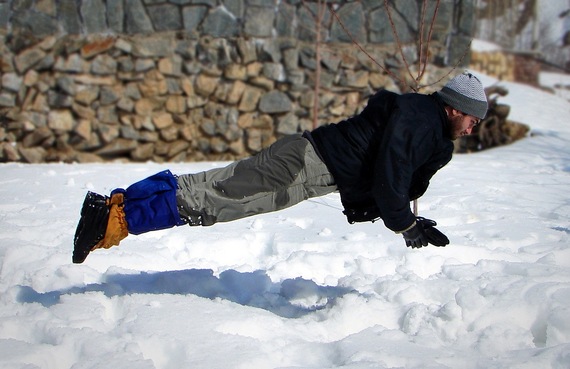 What's white and fluffy and heavier than you'd ever expect?

While the mid-Atlantic sits under a burgeoning blanket of snow, we are here to crunch some numbers and tell you that a single snowflake can't change a thing, but as they glom together en masse, everyone's favorite school-cancelling precipitation can weigh as much as 20 pounds per cubic foot.

For being a pastoral harbinger of wintry promise, snow is dangerous! About 100 people die every year shoveling snow in the United States -- their snow-clearing efforts elevate their heart rates beyond what is healthy, and they end up paying a mortal price that could've been avoided by simply staying inside and stirring cocoa.

Spread this weekend's 2 to 3 feet of snowfall over the total surface area of your yard, and it makes for literal tons of snow. Even if you're only looking at the snow that lands on your roof, that can be enough to cave it in. Just consider the 20 or so homes that collapsed under the weight of a Massachusetts snowfall last year.

Snow earns this mass by being made out of water, of course. Scientists have a measurement called snow water equivalent (SWE) that expresses the amount of water contained in a snow pack. It tells you how much water would be left behind if the snow were to instantaneously melt -- it's a product of depth and density. Regardless, the takeaway is clear: more snow means more water, which means more mass. Water weight is real.

Dry, fluffy snow is the least concern with respect to weight. This kind of snow will weigh around 7 pounds per cubic foot. If the snow is dense and wet, however, a cubic foot of it can weigh 20 pounds or more. Depending on snowfall depth and the surface area of your roof, it may very well behoove you to shovel the roof as well as your driveway.

Some useful advice from the DC government today: "If your roof collapses because of the weight of the snow -- call 911."

Nations Roof roofing company recommends that you only let your roof support half of its designated weight limit if it's going to be holding snow for an extended period of time. Those of you around the DC area: get shoveling!