Taking a break from my grueling home-work schedule, I plopped on my bed, remote in hand, and hit the "on" button. Serendipitously, The View popped up on the screen at a most delicious moment. As "fat" is my issue, my subject, my expertise, I was mesmerized by the topic. The "girls" were talking about an obese couple that wanted to adopt but were turned down by the adoption agency because they were too fat! The man, as I remember, had a BMI of 42, and 40 was the adoption agency's limit.

A heated conversation ensued about weight and Whoopi, bless her heart, trying to shed light on the emotions attached to the numbers on the Scales of Injustice, said that it's just a number and that she doesn't have a problem saying what her number is... and so she offered it to the audience: "174 pounds!" Cheers, claps, hooray Whoopi.

She then turned to Joy Behar and invited her to toss her number out there. But Joy and the rest, including their big-boy producer, sadly blew Whoopi's succulent invitation off. They moved on...but I didn't.

Here follows some vital information that can finally give you a new perspective on the Scales of Injustice and your number!

What does the scale really measure?

Do you know what the scale measures? Scientifically, that is?

Every object in the universe with mass attracts every other object with mass. (Some more massive than others!) Therefore, there is a pull, a force -- an attraction (even better) -- between you and the earth.

Your bathroom scale measures that force of attraction, and that force is called your weight. If you look at it in those terms, it takes the emphasis off fat and puts it on gravitational pull.
Nowhere in scientific data -- that I could find -- does it state that the scale measures hideous fat. It is only a number. There's no reason that we have to be in a twist over the attraction between the earth and us.

How attracted is the earth to you?

To Whoopi, I'd like to say, thank you for courageously tossing your number out there. Feel free to pass this happy spin on the scales of injustice to your friends at The View, Joy Behar, Elisabeth Hasselbeck, Sherri Shepherd, Barbara Walters and Susan Solomon. 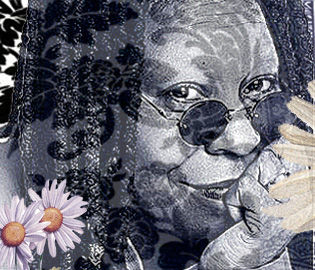 Read more from Janice on her Beliefnet.com weight loss blog
or visit her Our Lady of Weight Loss website.

I am a Creative Life Coach, author of the Our Lady of Weight Loss books, an artist, and a positarian!