In many American cities, the winters are bitterly cold, but the summers are oh so gorgeous. This wide disparity in weather is reflected in the price of accommodations: generally, booking a hotel in these cities is affordable in the winter and very pricey in the summer months. 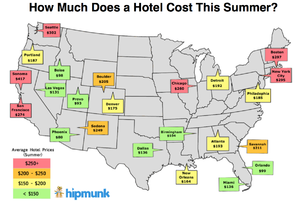 During the summer, tourists flock to cities for vacations, and business travelers are more amenable to meetings and conventions in cities like Chicago (which is beautiful in July and freezing in January). Since the supply of hotels is the same no matter what season it is, prices go up to meet the increased demand.

So, which American cities are going to be the most expensive to book hotels in this summer? In which cities do hotel prices skyrocket during the summer and plummet in the winter? At Hipmunk, we took a look through our hotel search data to answer these questions. (Note: we used the actual fares that Hipmunk users get when they book hotels through our site.)

On average, hotels in the United States cost $167 per night in the summer months. But in some cities, the prices are much, much more.

The Most Expensive U.S. Cities for Hotels this Summer 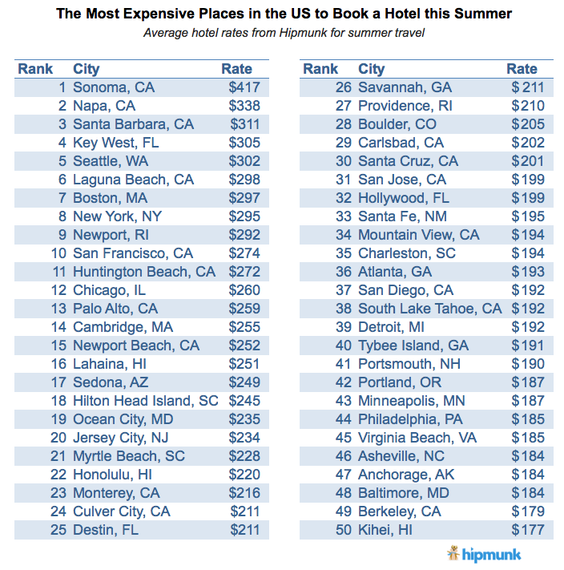 This summer, the most expensive city in America to book a hotel is Sonoma, California, where the average booking is $417. In close proximity to some 400 wineries, and perennially hot in the summer, Sonoma is an immensely popular vacation destination. But the Northern California hotspot has a limited number of hotels, and in the summer prices accordingly skyrocket.

Napa Valley ($338 per night), and Santa Barbara ($311) -- both of which are also peppered with some of America's finest wineries -- round out the top three most expensive cities to book a hotel in during the summer months.

Predictably, a lot of places with dreary or cold winters start to get much more expensive in the summer. Seattle, Boston and New York all crack into the top 10 on this list. Chicago, a city with a summer that is just as delightful as its winter is cold, is the 12th most expensive city.

Next, let's take a look at which cities have the greatest increase in demand when summertime rolls around.

Many popular summer vacation destinations are known for their beaches, water parks, and other aquatic activities. When the weather cools down many summer attractions close for the winter causing hotels to lower their prices due to an expected decrease in demand. If you book a hotel in these cities in the wintertime, you'll get a great price, but will have a smaller selection of activities to choose from. By summer, the prices will be much higher, but the full selection of attractions will be back in full swing.

Myrtle Beach, South Carolina is the city with the highest premium: $95 during the winter, and $228 during the summer, for a premium of 139%. Ocean City, Maryland and Newport, Rhode Island--both coastal towns with a huge tourist influx in the summer, but not much demand in the winter--complete the top three, with premiums of 130% and 101%respectively. 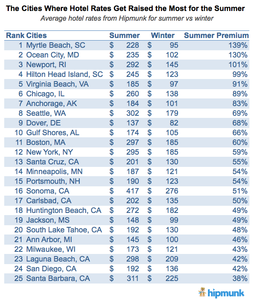 Ocean City, Maryland and Newport, Rhode Island, both coastal towns with a huge tourist influx in the summer, but not much demand in the winter, complete the top three. 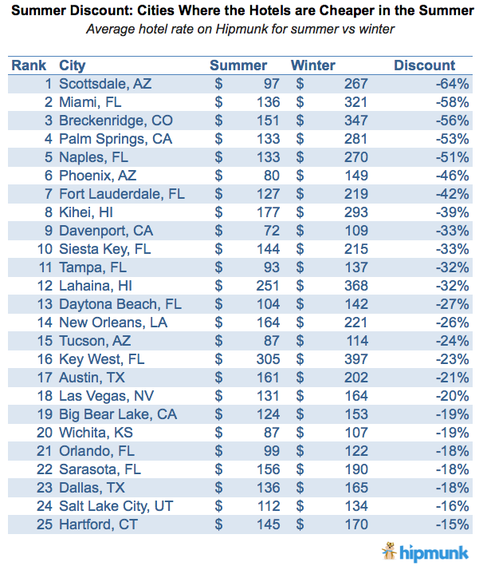 So, as a traveler wishing to get the best deal on a hotel, how does all of this data affect you?

One of the best ways to save money on a trip is to visit a vacation destination in a slightly off-peak season. That might mean visiting a ski resort in early spring, a winery in late fall, or a beach town just before the summer rush starts. To help you determine when certain cities post their cheapest hotel prices, we've assembled a little cheat sheet of costs by season. 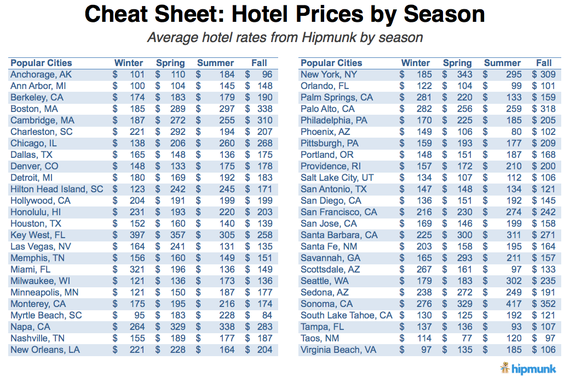 When you're planning your next trip, this table should give you an idea as to how much a hotel should cost depending on when you travel. If you're willing to miss a city's "prime" season, you just might be able to score a deal.Chart5

On behalf of Hipmunk, Priceonomics analyzed the average hotel prices on same-month bookings by Hipmunk users between January 1 and December 31, 2014.