How much would you lose in benefits if President Obama makes a deal with the Republicans to cut Social Security? The administration isn't denying reports that just such a deal is in the works. As the president prepares to meet with congressional leaders tomorrow, the financial security of millions of Americans may hang in the balance.

According to the polls, so could his political future.

If the President and his party accept a proposed "chained CPI" benefit cut, they -- and not their opponents -- are likely to be painted as "Social Security slashers." (Remember the GOP's Medicare strategy in 2010?) Dealmakers hope to avoid that by hiding the reduction in a lowered cost of living (COLA) adjustment, but it seems wildly optimistic to think a cut of this magnitude can be hidden from the public. It's doubly unfortunate because COLA adjustments should be increased, not reduced.

If you have a copy of your statement of estimated Social Security benefits (a document which, interestingly, the government seems to have stopped sending), this chart may give you a sense of how this deal would affect you: 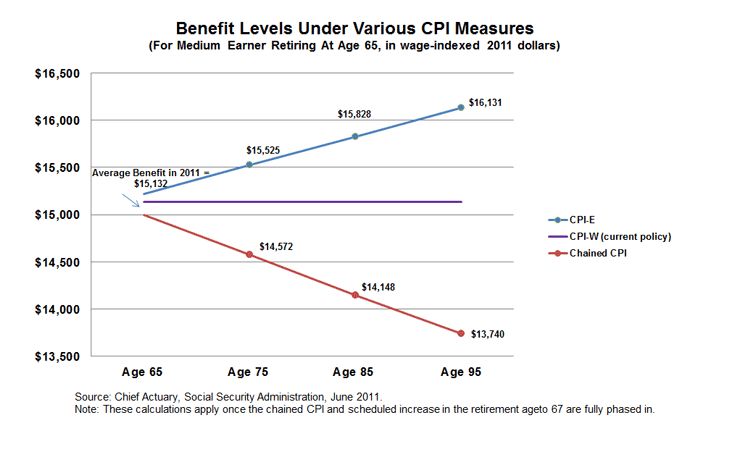 If you apply these percentages to your last estimate of benefit payments, you'll get a sense of this change's impact on you personally. If you don't have your last estimate of benefits (or haven't received one yet), here's a helpful graphic from my colleagues at Social Security Works that illustrates the impact of this cut on anyone who, well, eats:

The COLA adjustment also determines tax brackets. Changing it would be a two-pronged assault on the financial security of the middle class. It would cut the benefits they depend on in their senior years, while at the same time raising their taxes by pushing them into higher brackets. Guess who doesn't have to worry about this kind of "bracket creep"? Rich people. (They're already in the top bracket.)

The average retired woman receives $890 in Social Security benefits, so the "chained CPI" cut would slash her benefits by almost $500 by the time she's 80. Here's how the cuts work out overall: By the age of 75, benefits would be cut by nearly 4 percent. By 85 that figure would be 6.5 percent, and by 95 it would be 9.2 percent. It gets much worse for younger people, because the effect is cumulative.

Why would the president and his team agree to a cut like this? That gets into the realm of speculation. But there's a naive calculus, expressed by Kevin Drum and others, that a deal now would "take Social Security off the table for a long, long time." Is that your impression of how today's Republicans operate? Deals are made to be broken, and if they invent a phony "crisis" over morning coffee it'll be reported as fact by dinnertime.

Similar reports last January said that the president planned to announce Social Security cuts in the State of the Union, and they were later confirmed. These new stories have been surfacing for weeks without any denials from the White House. Instead we've seen more evasive talk about not "slashing" benefits (one person's "surgical cut" is another person's "slash"). Direct questions have met with responses like Press Secretary Jay Carney's, who said that the President doesn't see Social Security as a "driver" of deficits. (It's forbidden by law from adding to the deficit at all.) Carney added: "The president supports measures to strengthen Social Security, but he does not support anything that would slash benefits for future generations."

Contrast the White House's bobbing and weaving with Harry Reid's firm statements on the topic. In January Reid said Social Security cuts were "off the table." He asked the President to leave Social Security out of the deficit talks in February. In March he said he wouldn't consider restructuring Social Security for 20 years. But now the President has announced that he's taking direct control of negotiations, and it could be hard for Reid to block a White House/GOP deal -- especially if that could lead to a government shutdown.

That means that Social Security is now in the President's hands, and he's not telling us what he plans to do. We're told that we can't expect tax increases for the wealthy, the wisest solution to the deficit problem, because "Republicans... can't sell anything with the words 'revenue' or 'taxes' to their Tea Party members." Obama's base might want to consider applying some pressure to restrict its leaders' negotiation room, too.

A COLA change would also raise taxes on everybody but the wealthy. Is that the kind of accomplishment the President and his party want to campaign on in 2012? The charts and figures here should give you a sense of what this deal will cost you. The polls should remind the president and other Democrats what it could cost them.