I wanted to write to you to tell you how you changed my life. Sometimes Allah sends people in our lives in the forms of angels to teach us. When I was a chubby Pakistani-American kid in Dallas, Texas, my father took me to the mall to meet you. As a child, the maximum that I could have known about you was that you were a famous boxer, and that you were Muslim. What I later learned in life was that you were a civil rights activist, a person of strong and open faith, and someone who never apologized for what he believed in. When you were 22 years old (the age of my senior college students), you became the heavy weight champion of the world, and after refusing to go to the war in Vietnam for ethical and religious reasons, you were stripped of your title and couldn't box for three years of your prime. You later regained your title two more times, and we now know you known as "the greatest".

You definitely had a way with words, you were a poet, and would also predict when you would defeat your opponents. What I didn't realize was how much your life would affect me. When I was 13 years old, I attended a Christian school and I would pretend that I wasn't Muslim, that I wouldn't fast in Ramadan because I wasn't confident in my faith. I was somewhat ashamed of my identity as a Muslim-American. It wasn't until later in school that I would learn about how you, Mr. Muhammad Ali would not tolerate people calling you by your former name, that you would defend your brothers and sisters' faith and support your community by employing them as well. Attending one of the most conservative Christian colleges, I started to stick up for myself and say that I am a Muslim. I started working for civil rights in the Muslim-American community and have been involved in the public sphere in interfaith relations ever since then. I have dedicated my life to bringing people together, but I wouldn't have had the confidence without Allah's guidance and your modeling of that confidence. Another time I really felt your impact was when I was 22 years old. I had hurt my back, really bad. I couldn't leave the couch, I watched your videos on ESPN Classic, and it motivated me to get up and walk around, and then I went to physical therapy, got back into playing sports and began being myself again. Thank you for giving me the strength both physically and spiritually.

You were a confident, handsome, highly qualified black man who became Muslim and ran with it. In the civil rights era you persevered, even though you were the heavyweight champion of the world, you had to drink from segregated water fountains, had to be called the N-word by fans who would sit in the front row, waiting for you to lose and be humiliated and defeated. But you stood tall and said that you were the greatest, and even more important you said "Allah was the greatest." You used the word "Allah" (the Arabic word for God). You could have easily used God, but it was about identity. You taught me how to be proud of saying that "I am a Muslim." You taught me to be confident in addressing my God as "Allah." You taught me to keep my head up when I say that I follow the religion of Islam. I am not a black man, but I am a brown man who grew up in the south, a brown Muslim man. You taught me how to be "authentic" and now I teach being authentic to Muslims and people of other faiths as well. When you were diagnosed with Parkinson's disease, you said that Allah gave you the disease to show that "He was the Greatest." Recently, before you passed away, you corrected Donald Trump and his antagonistic views on Islam and Muslims, a truly remarkable way to end your legacy of service.

You truly were the greatest, not just because of your boxing skills, but how you taught us to stand for what we believe in and being confident in times of racism and in times of Islamophobia. May Allah bless you, Muhammad Ali. I hope and pray that young Muslims in the U.S. and across the globe will learn and implement what you have graciously taught us. Truly, someone who lived up to such a beautiful name. I hope you can continue to float like a butterfly in the next life, and perhaps we can go a few rounds. 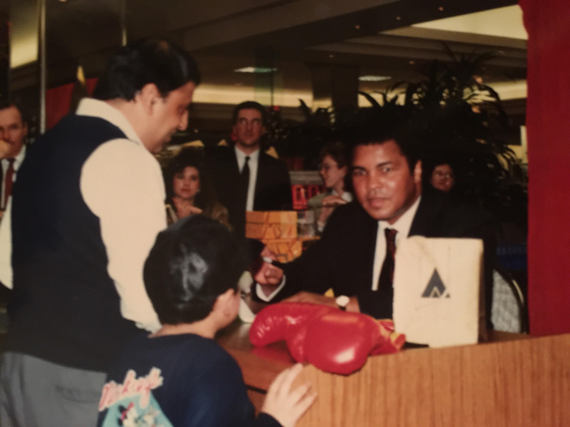