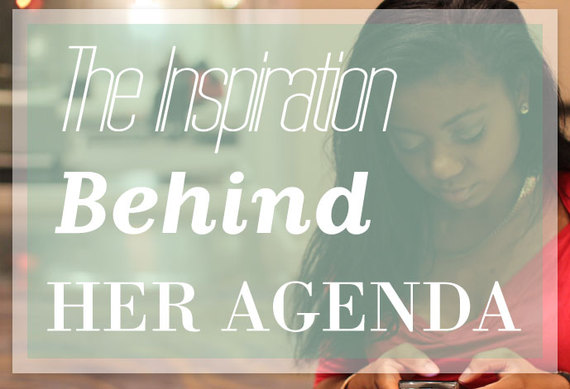 Nigerian author, Chimamanda Ngozi Adichie, boldly declares in her TEDx talk that we should all be feminists.

"Feminist: a person who believes in the social, political and economic equality of the sexes," she explained in the line now made famous thanks to Beyonce.

Unknowingly, I declared ownership of my beliefs as a feminist at the age of 16, with the creation of a personal motto: "No one Ever Slows Her Agenda."

Stemming from the acronym N.E.S.H.A., No one Ever Slows Her Agenda started out as my personal motto but now it's my mission to universalize that motto to young women across America. The message is that women and girls should not let anyone or anything stand in the way of your goals. The resources are out there, find them and make your agenda a priority.

As we approach the two-year anniversary of the official launch of HerAgenda.com (and given where we are currently with increased conversations around women's rights) I want to revisit the beginning -- the reason I started the site, and the reason why it's needed.

Decision-making positions are a key area where women fail to be represented. When I first launched Her Agenda, among the Fortune 500 companies, women CEOs ran only 18 of them, and before 1996 a woman CEO was nonexistent. Currently, there are 23 women CEO's running Fortune 500 firms.

But when I created my motto at the age of 16, sitting in a NABFEME meeting, the picture that those numbers paint were not on my mind. I was blind to the reason why an organization called the National Association of Black Female Executives in Music and Entertainment was needed. I was just excited that there was no age limit and in awe of being in a room full of amazing women who had in my eyes conquered the world.

They were entrepreneurs, and executives at record labels representing clients and celebrities I'd only dreamed of knowing like Beyonce, Rihanna and Neyo. Hearing the stories of the women in that room made their path to success vivid and real. The intimate feeling of the meeting made it seem as though the women were my big sisters telling me -- this is how I did it, and you can do it too -- but when you do it, make sure you take it to the next level.

Many young women lack exposure to examples of powerful women and lack the capacity to dream big. So, I created HerAgenda.com to highlight the stories of inspirational women who make moves behind the scenes. Each woman highlighted on the site embodies the "No one Ever Slows Her Agenda" motto within her industry.

The presence of women in powerful positions continues to shock and awe, further solidifying women as the "other" when it comes to positions of power. The next generation of women can shift these attitudes. Just as second wave feminists used the tools they found most effective during their time (protests, petitions, boycotting); a new generation of women dubbed by some academics as "cyberfeminists" are taking advantage of the tool they believe can serve as a catalyst for change in the years to come: the Internet.

Utilizing mentorship and personal empowerment, women are mobilizing and empowering themselves to ultimately break down the patriarchal structures of society and claim their power.

For Her Agenda, I wanted to translate the intimate feeling I experienced at that NABFEME event years ago into an online space. From this concept a platform emerged serving as a space to encourage young women to embrace the motto of No one Ever Slows Her Agenda and to utilize the inspirational real life journeys of power women to motivate and encourage users to not only dream big but do big.

In the video below, the Senior Vice President of Marketing for Barclays Center & the Brooklyn Nets shares her path to landing her dream job: