The amazing story of my mother, who survived the Holocaust as a child, served with love to all survivors and their families... You are the heroes of my life. 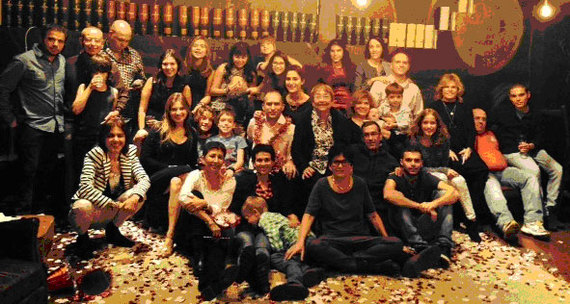 This is the amazing story of my mother, a child survivor of the Holocaust, retold in its entirety -- I just shortened 80 years to 1,000 words.

Rina Czaczkes Akselbrad (nee Schoenberg), daughter of Manya and Isaac, was born on December 6, 1933, in the town of Pinsk, Poland.

Manya, her mother, worked as a clerk in the Supreme Court. Her father Isaac worked as an engineer. The family owned a wood factory and a flour mill. The family enjoyed a high socioeconomic status. Rina was part of a large and educated family who lived in Pinsk and Warsaw. The uncles studied at the Hebrew-language "Tarbut" movement school in Pinsk, with the intention of coming to Israel upon graduation.

Gunshots and whistles pierced the air one night in 1941. The entire family hid in the basement as the Germans captured Pinsk.

The Nazi laws were imposed as soon as the occupation began: the forced wearing of yellow badges (her mother began measuring the yellow badge and started to dance, asking, "Well, how does it suit me?!"), a ban on Jews walking on the pavement ("I remember walking on the pavement, because I asked: How do they know I am Jewish? Why should I start walking in the middle of the road?"), etc.

On August 5, 1941, following Hitler's orders to eliminate all the Jews of Pinsk, her father was arrested while walking along the street and taken, along with thousands of other men, to the killing pit, from which he never returned. She later told me, "I did not allow anyone to touch my father's coat, I told everyone that 'this is Daddy's coat, and when Daddy returns he shall wear this coat.' I don't think everyone else shared my expectation that he will return."

They came and took her grandfather from her family's home, and Rina chased after him and wanted to go with him. At that time, Rina had a short haircut and looked quite like a boy. The Germans wanted to take her as well, and would have done so, had her mother not ran out, pulled down her trousers and shouted "Don't take her, she's a girl!" In three days, the Nazis murdered 11,000 men. Pinsk was left with only women and children.

Rina says that she saw and experienced terrible things in the ghetto: "It was always worse when the sun shone and so, for this reason, it was always said that though it may shine, the sun does not shine for us."

The ghetto had 240 houses spread across 23 streets, in which each of the approximately 18-20,000 Jewish residents had half a square meter to themselves. Each room was crammed with at least 10 people. Family relatives tried to live with one another, in order to somewhat relieve the terrible suffering.

One morning, a loudspeaker blared out: "All the Jews are to come to the yard!" Her mother understood that this was a Nazi roundup operation. Rina, along with her mother, grandmother and some other people, went into hiding underneath the kitchen cabinets. They remained in the hiding space for two weeks, drinking only water from the laundry and with no food. Then, her mother said: "Come, Rinchka, we're going." Her grandmother, who could not go, said "Go, go, maybe something will happen, maybe you will stay alive somehow, go, I can't go."

They left the ghetto and went to their house where, after their deportation to the ghetto, their maid now lived. Rina says that, "It was so strange, as we walked through the streets, the Christians had lights from their houses, the radios were playing, everything seemed normal..." They reached the house and her mother asked the maid, "Shura, please, allow us to stay here during the day, we shall be gone by nightfall."

Shura allowed them in and lifted a small opening in the floor and ushered them inside, where they discovered her father's brother and his friend. They had prepared the hideout well in advance. The group remained in this hideout for 18 months. During this period, the Germans arrived time and again at the house, and each time they were saved thanks to a great deal of luck. Rina describes how "I had resigned myself to certain death, but I was deeply troubled by seeing how I will die, my greatest wish being that I shouldn't see how I die. We had a grenade, this much I knew, and this calmed me, because my uncle promised that if they find us he shall explode the grenade, and by doing so we shall not see how they kill us."

The hiding place was a hole in the ground beneath the fireplace, where the trees were stored. For 18 months, this hole was 'home' to four people.

When the Russians captured Pinsk in 1944, Rina and her mother went to the family's old house in order to find their relatives. They found the house to be empty and they moved in. Her mother returned to work in the supreme court and Rina attended school as a third grader.

In 1945 they began their journey to Israel on the roofs of trains, through Italian towns and villages, until they were eventually issued immigration certificates by the British officials because Rina was an orphan. The journey to Israel took about six months and, in November 1945, they reached Israel.

Upon their arrival in Israel, Rina was sent to the children's dormitory in the Dafna Kibbutz. Rina and her mother were the only members of their family to survive and among the very few to have survived from the city of Pinsk. Rina is the only child from there to have survived.

After completing high school, Rina studied at a teacher training college.
In 1952 she enlisted in the IDF, where she served in the Chief of Staff's office and the Human Resources Directorate.

In 1957, Rina met David Czaczkes Akselbrad, a survivor of the Holocaust and of 12 years of Siberian exile, whose entire family had perished in the Holocaust. Rina and David were married and moved to Karkur, where they established their home together.

Manya, Rina's mother, worked as income tax assessor for 35 years and lived in Tel-Aviv for the rest of her life.

Rina worked as a kindergarten teacher at the Ministry of Education for about 35 years and taught hundreds of children in Karkur.

David worked in agriculture and was among the first rose growers in the country. Rina and David decided to defeat the Nazis by establishing a large family. Rina has seven children (including one set of triplets and one set of twins), three boys and four girls, all of whom have served in the IDF and three of whom are officers in the military.

As of today, they have 23 grandchildren, and all of the grandchildren (who have attained the age of recruitment) serve or have served in the army, some as combat officers, and most have completed, or are completing, a voluntary year of service prior to their enlistment in the military.

All the children and grandchildren live in Israel.

David died in December 2002, aged 79. Following his death, only male grandchildren have been born to the family, and Rina moved to Tel-Aviv.

Seven of the murderers of the Jews of Pinsk were tried in Germany, in a trial which lasted 14 months. A group of survivors of the Pinsk Ghetto, including Manya, testifed before this trial. Rina accompanied her mother to Germany. The trial ended with light sentences being handed down to the perpetrators.

Shura and her daughters, who saved Rina and her mother in the hiding place, have been recognized as Righteous Among the Nations by the State of Israel.

David adopted the surname of his uncles -- Akslberd -- in order to continue a name that was entirely eliminated in the Holocaust.

In 1999, a book was published telling the stories of David and the other Jewish partisans who, following the end of the war, were exiled to Siberia on the orders of Stalin.

Rina and David established a memorial in Karkur to the memory of Aharon Czaczkes, David's brother, who perished in the Holocaust aged 13.

The annual Holocaust Memorial Day: Each year, the entire extended family -- the seven children, their partners and the grandchildren -- together with the family's friends gather to commemorate Holocaust Memorial Day. The commemoration is an old family tradition. Each year, a different family member tells the story of the family and the Holocaust. Following the commemoration, the family meets in Rina and David's house and eat a "festive meal."b Rina likes to say that this is her festival -- the "Victory over Hitler Festival."