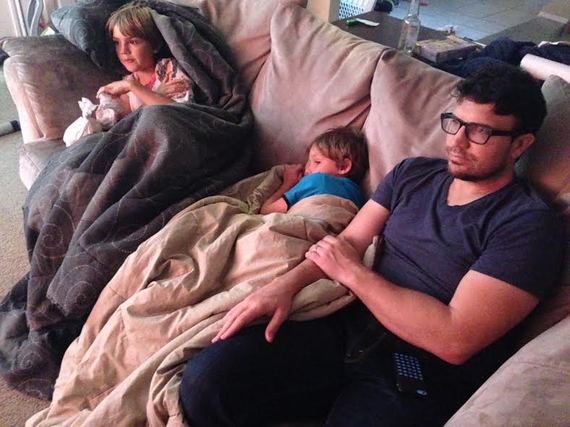 Husband and my older boys have lately been trying to cram in some viewings of old Star Wars movies before the new one comes out. It's important, Husband says, to introduce them to Luke and Yoda and Hans and, most of all, The Force.

I see his point. I mean, I remember watching all the Star Wars movies as a kid and enjoying the story, because it's a good one, and even thinking that maybe, just maybe The Force was real, and I could one day do what Luke Skywalker did, if I could only find a light saber.

It's just that when he says it's important to introduce the boys to The Force, I take exception. Because my boys are already well-acquainted with The Force. It's what they use to

1. Get their clothes in the laundry hamper...or not.

I know, I know. All the times I've come across their renegade pieces of clothing, smashed right up against a laundry hamper, it's just because they're still not that great at using The Force to get their clothes inside it. They just need a little more practice. That's all. And when I come across a shirt or some pants or missing underwear on the couch or their bedroom floor or in the bathroom sink, it's probably because one of their brothers did an arm fart in the middle of their putting-away-my-clothes-by-using-The-Force practice, and that's why their aim is so far off. Fewer distractions, they need.

2. Put their dirty bowls, silverware and plates in the sink...or not.

It doesn't matter if they've had three times every day for the last eight years to practice this skill, it's just a really tough one to learn. I can understand that. Some things take time. Lots of time. I realize they really, really, really want to get those bowls and silverware and plates in the sink, but The Force isn't strong enough to even pick them up off the table. Maybe The Force doesn't work as well when it comes to wood and food. Force interference, they are.

I get that this is a tricky thing to do, that flicking a finger from across the room to turn the light off in the last room they left. I'm sure The Force employs some intricately designed movement that requires motor skills my boys don't have yet, because every time I pass their rooms at any time of the day, the light is blazing and no one's home. When I point out the left-on light, they act like they forgot, but that's just a ruse, because boys don't always like admitting to what they can't yet do. Better honed motor skills, this requires.

I'm sure this goes back to The Force not working when it comes to things like wood and food, or forks and spoons and plates, because every time I ask one of them to set the table so I can finish up dinner, I turn around to put all those pots and pans on the table, and there are no plates and forks and spoons with which to eat, and they're all in the living room reading or building a block tower or banging out an original melody on the piano, as if they thought this job was already done. Different kind of Force, this entails.

You would think this might be the easiest of them all. Go out the door, pull The Force along with you. Come inside, fling The Force behind you. But I guess I have some young Padawans who haven't quite made it to Jedi status, because most of time, when they're coming in or out, they don't even seem to notice the door standing ajar and all the flies following them in. I wish there were a Force that could beat the flies, because they seem to love our house. So much so that the 6-year-old wrote an essay in school about how if he had a pet, it would be a fly-eating frog, so it could catch all the flies his mom hates. Which is why I really want my kids to master this closing-the-door-using-The-Force, because we don't need kids' teachers to know about things like that. More Physical Force, I demand.

I really wish I could help them here. If only words could pull enough of The Force with them to lather up the kids in the bath. Because "make sure it's the first thing you do" is the same thing I say every single night when they get in the bath, and when that timer clangs and I tell them it's time to get out, their hair isn't even wet. I know they're really trying to use The Force in between driving that car up the sides of the bath tub and pretending like they're swimming in deep water. It's not an easy thing to tell them it's just not working, but somebody's gotta do it. Intensified training, they need.

Oh, wait. That's me. This is the one time The Force actually works for my boys, even if it ends up piling underwear in a closet and shoving hang-up shirts in the pajama drawer and crumpling jeans in the underwear drawer. I don't even care. At least The Force put it all away. Better than I'm doing, it is.

Well. Now that I've written all of that out, I can better understand where my little Padawans are coming from. They just need a more skilled Jedi Master to help them hone their powers and teach them the intricate subtleties of using The Force.

Since it's clear that The Force doesn't work for Husband, either, I guess that means I signed up to be their Yoda. To work, I go.