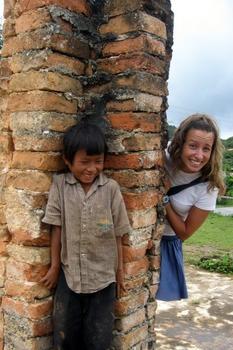 For Hannah -- and for many young children -- the point of the game is to be found. Over time, however, we start to get lost. We hide from ourselves. We hide from what we know is right. We start to hide from God.

The Jewish holiday of Purim, which begins tonight, calls on us to stop hiding. It tells the story of one remarkable woman -- Esther -- who initially hides her from her religion, from her king, from herself.

The she changes. How? She faces a real need and a challenge. As told in the biblical Book of Esther, Esther's cousin Mordecai learns of a plot to murder the Jews of Persia. He asks Esther to intervene with her husband the king. The king does not know his wife is Jewish, and that she may well perish with the other Jews of the kingdom.

The magnitude of the task clearly distresses her. As the text says, she fasts for three days. Then she decides. She stops hiding. She tells the King who she is and asks him to annul the genocidal decree. It works.

Her uncovering of her hidden self saves the Jewish people. The name Esther itself is derived from the Hebrew word Hester, which means hidden. The book of Esther is about hiding, seeking and revealing the power, the strength, the courage hidden within ourselves. You have it. Now go and find it.

Click here to get a free 1-page guide to all the Jewish Holidays!