Maybe it's because I'm a freelance writer. Maybe it's because I cover entertainment. Maybe I'm just an easy mark. But over the years, again and again, friends and acquaintances and friends of family and people I don't even know have cornered me for advice on their picture book/movie/tv show. Or to be more exact, their IDEA for a picture book or movie or TV show. I've been sent movie scripts and TV pilots and spec scripts (where you write an episode for a show that already exists), I've been sent novels and memoirs. I've been asked to listen to a CD, come to a play, attend an art opening and maybe I could write about it? It happens so often, my middle name should be slush pile.

But never before has someone come up to me and said, "I've created a game." A game? A card game, with its own deck of cards and rules, like Uno but smarter and more fun. And this was an actual friend, not just a friend of a friend. I met Pete at Yankee Stadium during a rain delay in 2000. We'd both purchased season tickets for the bleachers the first year they were available and for some reason George Steinbrenner decided the evangelical Christian Pete and the fallen New Yorker Michael should sit next to each other.

Naturally, we'd sort of nodded at each those first months, realizing that the guy next to me apparently was always going to be next to me. Finally, when there was a rain delay and I was by the entrance ramp in the bowels of the Stadium and reading a book, his (more liberal and yet man of the cloth) brother Andy asked me what I was reading. That led to introductions and my finding out Andy was destined to become an ordained Methodist minister. He asked me what my favorite book was and I asked him what his favorite Commandment was and they laughed and that was it.

More than a decade later, Pete (and Andy) and I are good friends. But that didn't make it any easier when he approached me with that I've-got-a-creative-project-and-you're-going-to-help-me look in his eyes. A sitcom about two best friends, one evangelical and one gay? A church-going friend of his with a (Christian) rock band playing a church basement sometime soon? Nope. It was Str8 Eight, a card game. I'd heard about this crazy idea already -- he'd had a dream about a new card game that employed the simplicity of Uno with the numbers tables. But hey, let Pete explain it to you.

No one had ever asked me to play their original game before. I come from a family of six kids and we are extremely competitive so playing to win is the only way I know how to have fun. (I don't mind losing; I just mind not doing my best or the other person not trying.) So I know games. It's hard to offer constructive advice on a script or album or work of art. But a game? The gloves were off; I wasn't about to mess around with something that wanted to take its place alongside gin rummy and war and cribbage.

And what do you know? It's actually fun! We played by phone once or twice, which convinced me he needs to develop an online app once Str8 Eight takes off. We played at Yankee Stadium (before the game, of course) and in other parts of the city. It's fun for kids because they can get visual clues about which cards can go next thanks to color coding. But they also learn about math without realizing it. (Sneaky!) Don't worry, it's not "educational." It's just fun.

And like any game, you can come up with your own twists, just like Monopoly where some people place fines in the middle of the board to be claimed by some lucky player. The run of eight cards goes strictly forward, according to the official rules of Str8 Eight. But my New York friends immediately suggested we play Bisexual 8, where the runs of numbers can go forward or backwards. Others came up with even more variations, but the official rules are the way to start. That allows for enough strategy to make it fun and more than just a game of chance, the way Uno is.

So now Pete has mass produced decks of cards and begun his campaign to bring Str8 Eight to the world. He's got a website and he's got a Facebook page. His hometown of Alfred, New York named August 8 its official Str8 Eight Day starting in 2013. (Book now for the 2014 festivities in Alfred! Local hotels are accepting reservations!) They had a tournament and stores gave discounts of... 8 percent. (The store owners are probably thrilled the game isn't called Plenty 20 or Dirty 30.) He's gone to gaming stores in major cities, playing Str8 Eight and proselytizing harder than his preacher brother ever did. Events linked to the game inevitably begin at 8:00 pm or 4:04 or 6:02. Heck, even Santa apparently got in on the act. 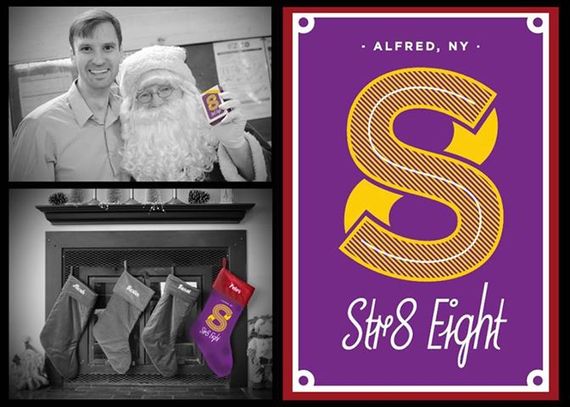 So I've done my bit for Str8 Eight. It's a great gift! (See, Pete? I said it.) I now see the number eight everywhere and once spent an afternoon roaming New York City taking pictures of street signs and building numbers and license plates that contained the number eight. The Guggenheim? You can take a picture of that iconic building with the sign for 88th St. in the foreground! Was Frank Lloyd Wright a fan of Str8 Eight? I can't find any evidence that he wasn't! Should a spider be the official Str8 Eight mascot because it has eight legs? Should you buy a couple of decks of Str8 Eight to share with family and friends? Now, that's a question I can answer.