A certain sad-sack once rescued a forlorn tree from certain Christmas oblivion, giving it a home and a single ornament to call its own. When Charlie Brown saw that sad, lonely tree, it spoke to him and he knew it was meant to be.

This year, a tree spoke to my husband. Just like that. Only different.

As we wandered onto the tree lot with our two boys, bundled up against the cold, Gabe came to a standstill right in front of a 10-foot-tall behemoth -- a well-placed street light causing heavenly rays of light to beam down upon it. This King of the Lot spoke telepathically to the Master of the House, saying something only the man and the wood will ever know.

And then, the Master of the House spoke back.

I threw my head back and laughed. Then I noticed his serious face and gave him that look that says, "Bless your Jewish heart."

"Honey, this tree is way way too big," I said, gently pulling the boys towards the grove of eight-foot trees, hoping he'd follow.

"No, it's not. The ceilings in our new house are 12 feet high. This one is perfect."

I glanced back. In the light streaming from the street lamp beyond, he and the tree had fused into one eerie creature. 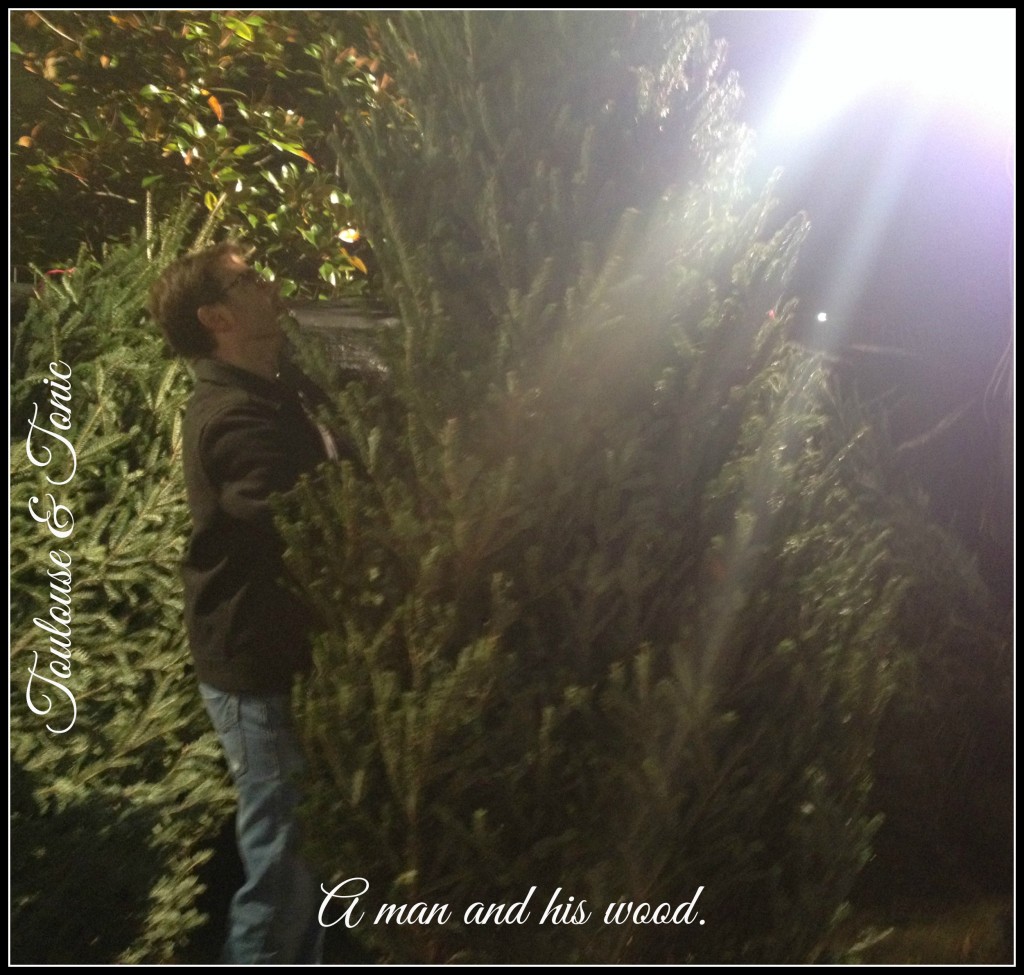 "Sweetheart, it's too big," I said, firmly. "Let's look at these eight-foot ones. They're perfect."

The kindergartner looked from me to his father, from his father to me.

Gabe was shaken a bit, but still -- he would not be the master of an unworthy eight-foot tree.

"Excuse me, Sir," he said to the manager of the lot. "Do you have any nine-foot trees?"

"Why, yessir, right back here."

He led us to the back of the lot and waved his hand over a pile of trees, branches still bound in netting.

Gabe stood one up. "What about this one?" He and the boys appraised it.

"Well," I said, "it MIGHT be lovely, but it's impossible for me to tell. It's still got the netting on it and even if he cut if off, the limbs wouldn't have fallen out yet so I can't tell if it has any holes."

"Holes, like gaps in the branches. Oh, never mind. Just trust me -- I've been doing this my whole life."

Forgotten, the children chased each other around a nearby tree. 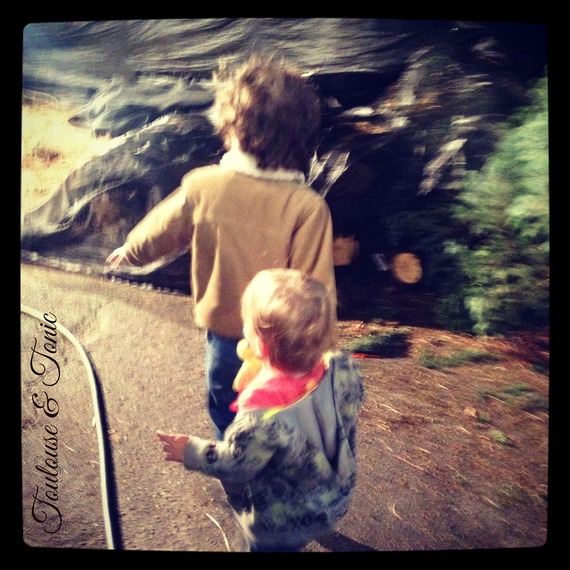 Gabe dropped the nine-footer, put his hands on his hips.

"Well, what do I know, with all my Jewish tree-buying experience? I guess since you're Christian, we should just get the tree you pick out and be done with this."

"Gah, whatever! Just get this one!" I threw my hands up, and as is my nature, began to walk away.

And then a voice interrupted us.

Our eyes met, Gabe's and mine, and there was momentary shame in them, and then mirth. How silly we were being. But what a smart child we'd made.

When we decided to get married all those years ago, we knew there'd be many compromises to make along the way. We also trusted ourselves, and the family we'd become, to make them never SEEM like compromises. And this is why we celebrate the long season of Chrismukkah -- really less a blended holiday for us than a celebration of both. Instead of laying a path out for our children (that they won't take, anyway), we've pledged to show them both paths -- and even other paths -- and let them choose their own ways.

Asher, Meyer and I convened in the grove of eight-foot trees and decided to surprise Gabe with the one he wanted. The ceilings in our new house are very high, maybe we could make it work.

The monster came home with us. Just getting it into the house was a Goliath struggle. With our sap-covered hands, we slowly pushed the tree to its full height and stepped back. Several inches at the top bent sideways against the ceiling. Asher and I giggled. The little one pointed and said, "Twee!"

Just then, a knock on the front door signaled the arrival of Asher's playdate from his new school. I dashed for the bedroom in pajamas and unwashed hair while Gabe, eager to meet potential new friends, answered the door. I heard stomping as the boys ran down the hallway towards the playroom and then, in muffled tones through the bedroom door, Gabe's eager, polite chat with the boy's mom and dad. Then... a loud thud. 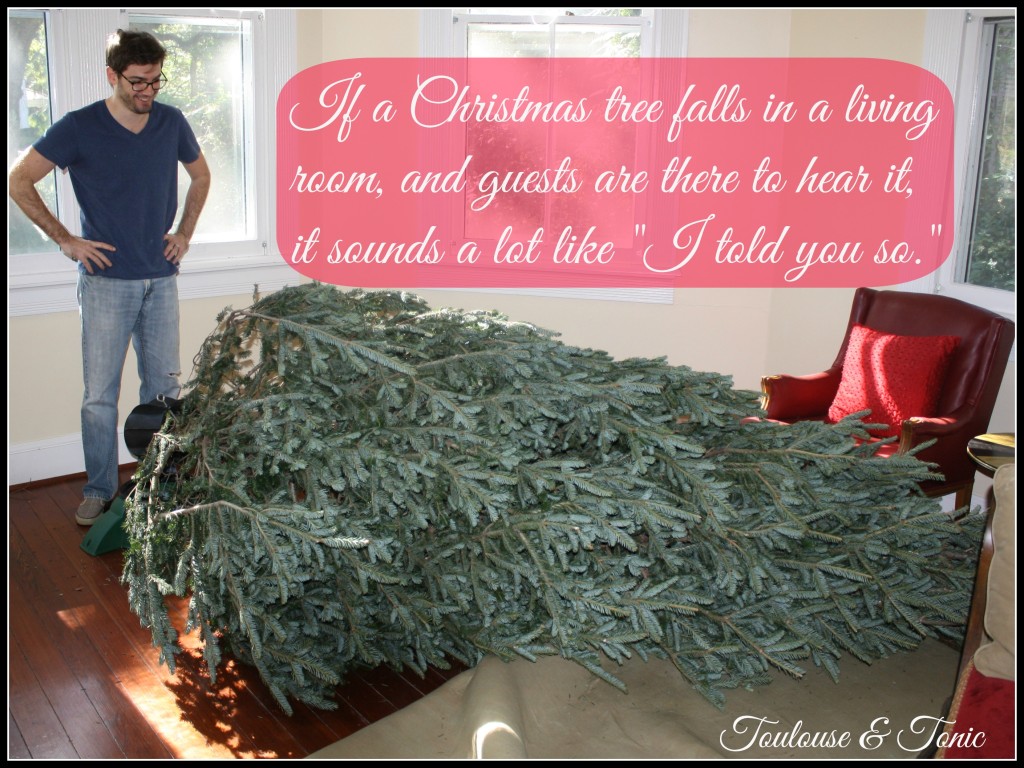 "Oops," Gabe said, a little embarrassed. "Guess I need to go take care of that."

We met in the living room over the felled tree, a perfume of frasier fir and humility in the air.

"Honey, it's time," I said. And we shook our heads in the same manner, but with different meanings.

"Hi, I was there last night and I wanted the big tree and my wife said it was too big and..." Quiet on his end of the line. "Yep, she was right." Silence. "It broke the tree stand." A lull. "Thank you. I'll bring it back now."

The 10-foot tree went back and an eight-foot tree took its place. It's a beautiful tree, even if it may bear half of its ornaments in a one-foot radius on the lower left side. Gabe is fond of working late at night in the living room with the twinkling of its lights lending a calming atmosphere to his late hours.

I don't say "I told you so." I just laugh. And so does he. We've found that the most important thing in our interfaith marriage -- maybe any marriage -- is a healthy dose of humor. Even if it sometimes takes a child to remind us.