You know how some big dogs like German Shepherds develop hip problems as they get older? In their later years, they begin to limp, and running or playing fetch becomes increasingly hard -- and eventually, they can barely walk without immense pain. The condition certainly isn't inherited by every pooch, but it isn't uncommon, either.

The disorder of hip dysplasia (when the hip joint doesn't form normally) isn't exclusive to dogs. In fact, I was born with it in my left hip and because the doctor didn't catch it right away, I underwent four major surgeries at the ages of 2, 2 and half, 5 and 6. I was in three body casts for about 24 weeks altogether, and then a wheelchair for eight weeks and crutches for a few after that. I had to miss a good chunk of kindergarten because I couldn't go to the bathroom or sit in a classroom. 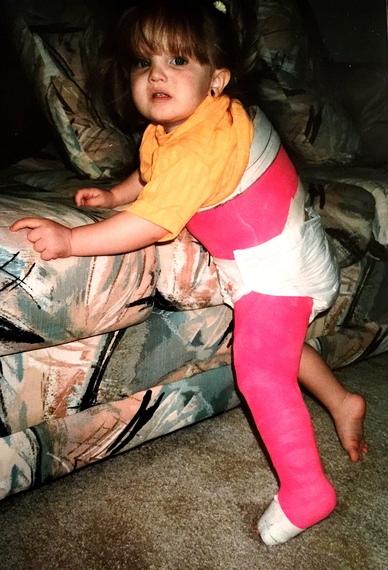 The effects of hip dysplasia lingered throughout all my childhood. I remember, at 5 years old, feeling so humiliated because I had to pee in a pan with the help of my parents. My left leg was (and still is) significantly weaker than my right, and my left foot is about half a size smaller than my right. "Why are you limping?" people would ask, even when I was just walking from the bus or to get a drink at the fountain. It was hard for me to run, and when I was forced to in gym class, I knew I looked funny. I'm told that I run like a chicken, specifically. I actually think chickens are pretty good runners when they have to be, but I don't think it was meant as a compliment. I laughed anyway.

When I was 9, my mom gave me a bottle of vitamin E oil to rub on my scars at night to help them fade. Although purple was my favorite color, I didn't think my purple scars were attractive or pleasing to the eye; I thought they were ugly. I'm in my 20s now, but I still remember that little brown bottle sitting on my nightstand. I wish I could go back and tell myself that even the best oil in the world won't make my scars ever go away, but more importantly, that sporting these scars is something of an honor. To try to rub them out is like trying to erase my history.

Although an active kid, the number of sports I could participate in (and be good at) was small. Softball was one activity I could actively engage in, because the amount of running is limited compared to other athletics. I enjoyed it and was, for a kid, decent (but maybe that's just what my mom told me). I joined the school team every spring for about seven years.

In the sixth grade, I tried out for cross-country. My orthopedic surgeon warned me not to put too much pressure on my hip, but I wanted to prove that I could do anything. And although I finished dead last at every single meet, and the eighth graders threw acorns at me, I stuck it out to the very last race of the season.

I tried tennis, dance, basketball, even ice-skating, but I never found my fitness niche until I joined the local swim team in the fall of eighth grade and fell in love with it. The best part about swimming was that the water was easy on my hip joints, and I could exercise as rigorously as I wanted without experiencing symptoms akin to arthritis. I worked hard and swam year-round for around four years. At the height of my swim career, I even made it to the state meet, where the top swimmers in the state competed. Developing such strength in spite of hip dysplasia -- I had a genuine swimmer's body! -- brought about a new layer of confidence, and I felt good.

Now I'm a senior in college, and although I don't swim anymore, I still possess the self-assurance that swimming blessed me with. "What happened?" people will ask in the summer when I'm wearing shorts or a bathing suit, shyly pointing at my scars. But there's no need for timidity -- I don't feel less beautiful because of them. I view them as a symbol of strong will, proof that I'm resilient. I'm kind of a tough cookie. And besides, I've always looked to stand out from the crowd, and I think my scars give me a bit of an edge.

My scars aren't a source of embarrassment or shame, and they never affected my love life. I've had my share of relationships, and not one of the guys whom I've dated has turned away because of my scars or deemed them unattractive. Recently, I texted a guy friend the above picture. "It's beauty," he said. "Like art, you know?"

Now when I see someone else with large or noticeable scars, I think about his or her spirit. I think about how he or she experienced something that was difficult or even traumatic, and survived and is now flourishing. To me, that's the most attractive quality any person can possibly possess -- unfailing optimism, power, courage, strength of mind. To me, a scar is a beauty mark. 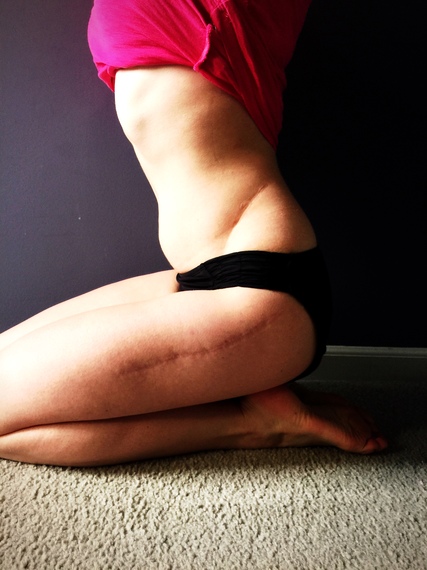 Likes Snapple, social media and all things pen and paper