Earlier this week my son and I presented the animated short of the children's storybook, Black Day: The Monster Rock Band. We had a few stops scheduled; one was to the third grade classes at an elementary school near Austin. The teacher who arranged our visit told me, "I read the book to my class last week. They loved it! I told them that the author has Down syndrome and they asked, 'What is Down syndrome?'" 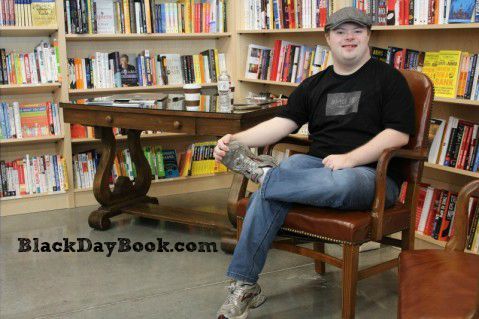 This has been my dilemma as Marcus and I have met each new group. Should we talk about Down syndrome? And to what extent? It is, after all, Down Syndrome Awareness Month, and Marcus does happen to have Down syndrome.

In the case of the first graders we visited in Georgia, they were pretty focused on the monsters in the band, the angry mob, and loving the music. Marcus told these students if they want to write stories they need to, "Write your letters. Read books. See Musicals." Then, "Do what you want." After the children had a chance to ask their questions about the monsters and the Halloween magic, they lined up and followed their teachers back to their classrooms. None of the first graders had a question about Down syndrome.

However, the difference between first graders and third graders is a very long two years. The problem, from my perspective, is two-fold. One is that Down syndrome can be summed up as a common chromosomal condition involving the 21st chromosome, but of course, there is so much more to say, teach, and explain than this one sentence. There are many points involving science, medical information, social implications, not to mention the emotional triggers any diagnosis brings to the forefront. Secondly, Marcus himself has said in an interview, this book has "nothing to do with Down syndrome."

Yet, as Marcus' mother, co-author, and accidentally appointed publicist, chauffer and travel manager, I know that for many others - especially other parents - this book, animated short, and Marcus' meet and greets have everything to do with Down syndrome awareness.

So what to say to the third graders? My decision was to explain this: "You know how everyone is good at something and not so good at other things? Like maybe your parents say they aren't really good at math but they like to read, or that they don't spell well but they like science?" (Nods in the room) "Well, in our house we try to focus on the things we ARE good at, and not worry too much or focus on the things we're not so good at. Marcus is a really good storyteller." Truthfully, it wasn't as eloquent as I had hoped and I wanted to say much more, and yet didn't know how to keep it short.

Something else Marcus is really good at is getting to the point. When he took the stage this was his advice for the third graders:

No matter how many chromosomes you have, that's sound advice. In fact, I feel that if we all followed that advice, we wouldn't need a Down Syndrome Awareness Month. However, we would all still enjoy a good Halloween story and monster rock band.

You can learn more about Marcus and the book Black Day: The Monster Rock Band at GrownUpsAndDowns.com