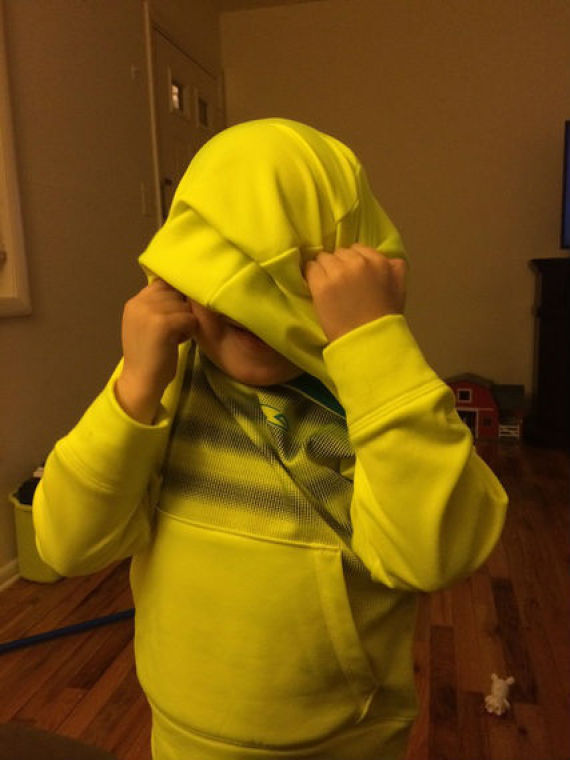 In just a few short days, April 1st begins Autism Awareness Month. My son, almost 5, is autistic. How far on the spectrum he is remains to be seen but either way, every day is a challenge. There is no one mold that every autistic child fits into, but many share the same behaviors and characteristics.

Call me naive, but when I found out I was pregnant, autism never even entered my mind. At one point in my pregnancy, there was a possibility that my son would have Cystic Fibrosis, as I unknowingly was a carrier. Luckily, he's free from that; I considered myself blessed and continued dreaming of a future with a happy and healthy child.

During his birth, there were some complications and he wound up in the NICU; I wasn't allowed to see him for the first 24 hours of his life. They put me in a room next to the regular baby nursery. I cried all night, listening to all the moms and dads visiting their healthy babies, allowed to touch, hold, and feed them.

Because he had swallowed meconium, his throat had to be vacuumed and he refused to eat after that. I watched as my newborn wiggled around under hot lamps, covered in wires and tubes so that he would be fed.

When we took him home, he had digestive issues. We had to use special (extra expensive) formula just so that he would keep it down and not cry in stomach pain. Til this day, he still has feeding issues.

We knew his speech was delayed when other parents started posting pictures and videos on social media of their children, the same age or younger, talking up a storm, while our son would do nothing more than coo. We applied for early intervention and was denied several times. In the state we lived in, early intervention ends at the age of 3; my son was approved 3 months before his 3rd birthday. Though it was going to be a short term therapy, we jumped on it. I don't know if our luck is just really bad or if ABA therapy is what it is, but we had therapists coming in to our home with iPads, handing it to my son only to take it away to make him cry. When I asked why they were doing that, their reply was "To get a reaction from him and hopefully get him to speak." I felt it was cruel and that my sweet, kind hearted son was being teased. Meanwhile, most of the therapists did this while also texting on their phone, giving my son the least attention possible. After a month, my husband and I called off the therapy. He was doing much better when we applied learning activities during play time than he did when the therapists were around.

We live in a new state now and after waiting years to have him officially diagnosed with autism, we are now in the process of finding private therapists, not paid for by the state.

The guilt I feel daily over how our life is can be devastating. What if I did something wrong during my pregnancy that caused this? Did I do something wrong while giving birth? Did I take too much Tylenol? What could I have done to prevent this? Currently, the answer is nothing. No one has legit answers as to what causes autism, though many have their own ideas and beliefs. I personally don't follow any ideology regarding the cause. I just want my son to live a normal, happy life and my husband and I will do whatever it takes, whatever the cost, to make that happen.

Too often, I compare my life with others- those who don't have autistic children and can go into a restaurant and not worry about having meltdowns; those who can enroll their kid in soccer or post pictures of their kids eating real food with real utensils. It breaks my heart that my son can't do that. It breaks my heart that we live a very different life than most people.

Friends and family try to understand but always wind up saying the same thing, "Well, can't you just do this?" or "Why don't you try this?" I know they mean well, but it stings to think that others don't realize we've already tried this or that. We've tried everything.

Depending on the severity of autism, daily life changes dramatically. Arrangements have to be made for even the most day-to-day things, like family events, doctor visits, etc.

I think about what I thought my life would be like with a child and it's nothing like I imagined, but you know what? That's okay. Because although my child has a disorder, and life is made a bit more difficult, he is happy. When I see him smile, my heart fills up with pride and love. He is the best thing to ever happen to me, and I'm willing to spend my life and sacrifice all things to keep him happy. A mother's love is something special, and even though I had no idea what I was in for, I always knew my son would teach me what true love is.