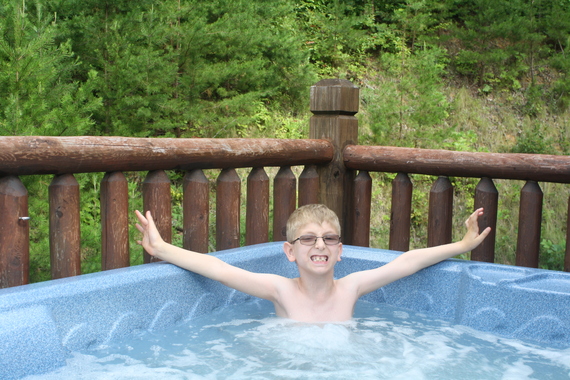 I'm a relatively quiet person, but after my son Evan was diagnosed with autism I became an advocate in ways I could never have imagined. I've advocated for his bus drivers, his teachers, his school social worker, his friends and their families and most important, I've advocated for Evan.

When it comes to writing a letter or a quick phone conversation, speaking up for my son is easy. But when advocacy involves a public presentation (which I define as talking in front of three or more people), I panic. But then I think of Evan. And I don't just think about his needs but instead what he does when faced with an uncomfortable situation.

Evan is constantly challenging himself by working hard to overcome his fears. Watching him inspires me.

For the longest time he was deathly afraid of fire. So he watched videos of fires on YouTube because it was a safe way of exposing himself to his fear. He used to make up songs and monologues about fire. He drew pictures of fire too. Then slowly he would find ways to get closer to a flame. Candles are no longer banned from his birthday celebrations. Family movie nights during the winter now include a lit fireplace, and his favorite part of camping is having a fire.

Evan's still not 100 percent comfortable around a flame. The other night at dinner, Noah ordered saganaki (flaming cheese). We asked the waitress to light it in the kitchen. But when someone at a nearby table nearby ordered the same dish, Evan chose to watch instead of hiding behind a menu.

Evan is my reason for stepping outside of my comfort zone and getting behind a microphone at a school board meeting. If he can challenge himself, so can I.

He is the reason I said "yes" when asked to discuss our journey with autism in front of few hundred people attending a volunteer recognition night at an organization that provides programs and services for individuals with special needs. He is the reason I attend school board meetings and challenge the officials there when I don't agree with the direction they appear to be headed. He is the reason I had the courage to speak at my grandmother's funeral when it would have been easier to have someone else share my thoughts on this emotional day.

But Evan isn't my only inspiration. He is in good company with some of my friends who also have special kids. They are great at fighting for their children and work tirelessly to get them the programs and services they deserve in schools or to have them treated like all other children.

I think about my friend whose daughter was among a group of students in a special education classroom who was knowingly left out of the school yearbook.

"A message has been sent to those students, their parents, and their typically developing peers in general education," she wrote in a blog about the incident.

"I feel disappointed the administration opted not to take advantage of the opportunity to reverse that message, which could have been a beautiful basis for an anti-bullying campaign. That's how we feel. Bullied. Disrespected. Like my daughter doesn't exist. Because in the yearbook that sits in the homes of all the student body, she doesn't."

Sometimes advocacy doesn't involve letter writing or public speaking. Sometimes it's doing something different for our kids because otherwise that something just wouldn't exist.

A few years ago my friend was in search of a class that would help teach her non-verbal son basic life skills such as grocery shopping and cooking. But nothing was out there, so she created a program herself. And because there are other kids with the same needs, she opened it up to other families. While a few have joined, mostly during the summer, she continues to work toward her goal of starting her own school.

Sometimes advocacy involves finding ways to make the world a more comfortable place for our kids. When Evan turned eight, he wanted a birthday party at a roller skating rink, just like his brother had had, but he requested that it be "sensory friendly." This meant no loud music, no dark skating rink and no flashing lights. Because these features are part of the ambiance guests expect at a rink, hosting a skating party did not seem like an option. Yet as my wise mom likes to say, "there are always solutions."

We wanted to give Evan the party he requested, so with the help of the Friendship Circle, an organization that provides programs and services to individuals with special needs, and the cooperation of a nearby skating rink, we planned a sensory-friendly gathering and turned the event into a fundraiser. Evan got the party he wanted, families who never had the opportunity to visit a roller rink could do so in a comfortable environment and we earned a few extra dollars for our favorite organization.

We're not going to change the world overnight. We may never change things at all - but we sure as hell have to try. Evan taught me that when he unknowingly turned me into a perpetual advocate.

Voting Made Easy
Register to vote and apply for an absentee ballot today
Register now
More:
Advocacyspecial needs parentingParentsAutismspecial needs children
Newsletter Sign Up
Raise the kind of person you'd like to know
Subscribe to our parenting newsletter.
Successfully Subscribed!
Realness delivered to your inbox