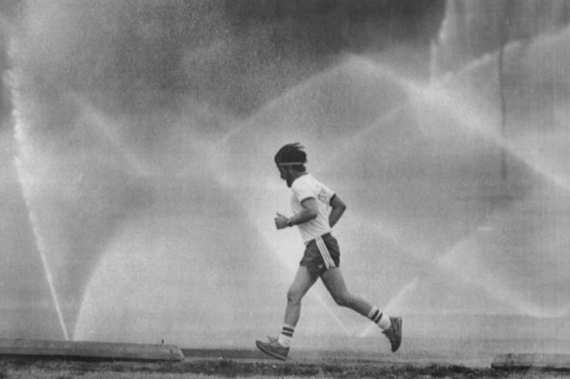 It is something of a cliché among runners, how the activity never fails to clear your head. Does some creative block have you feeling stuck? Go for a run. Are you deliberating between one of two potentially life-altering decisions? Go for a run. Are you feeling mildly mad, sad, or even just vaguely meh? Go for a run, go for a run, go for a run. Related: How Running and Meditation Change the Brains of the Depressed The author Joyce Carol Oates once wrote in a column for the New York Times that "in running the mind flees with the body ... in rhythm with our feet and the swinging of our arms." Filmmaker Casey Neistat told Runner's World last fall that running is sometimes the only thing that gives him clarity of mind. "Every major decision I've made in the last eight years has been prefaced by a run," he told the magazine. But I maybe like the way a runner named Monte Davis phrased it best, as quoted in the 1976 book The Joy of Running: "It's hard to run and feel sorry for yourself at the same time," he said. "Also, there are those hours of clear-headedness that follow a long run."

A good run can sometimes make you feel like a brand-new person. And, in a way, that feeling may be literally true. About three decades of research in neuroscience have identified a robust link between aerobic exercise and subsequent cognitive clarity, and to many in this field the most exciting recent finding in this area is that of neurogenesis. Not so many years ago, the brightest minds in neuroscience thought that our brains got a set amount of neurons, and that by adulthood, no new neurons would be birthed. But this turned out not to be true. Studies in animal models have shown that new neurons are produced in the brain throughout the lifespan, and, so far, only one activity is known to trigger the birth of those new neurons: vigorous aerobic exercise, said Karen Postal, president of the American Academy of Clinical Neuropsychology. "That's it," she said. "That's the only trigger that we know about."

The other fascinating thing here is where these new cells pop up: in the hippocampus, a region of the brain associated with learning and memory. So this could help explain, at least partially, why so many studies have identified a link between aerobic exercise and improvement in memory. "If you are exercising so that you sweat -- about 30 to 40 minutes -- new brain cells are being born," added Postal, who herself is a runner. "And it just happens to be in that memory area."

Related: What 10 Nude Athletes Can Teach You About Loving Your Body

Other post-run changes have been recorded in the brain's frontal lobe, with increased activity seen in this region after people adopt a long-term habit of physical activity. This area of the brain -- sometimes called the frontal executive network system -- is located, obviously enough, at the very front: It's right behind your forehead. After about 30 to 40 minutes of a vigorous aerobic workout - enough to make you sweat - studies have recorded increased blood flow to this region, which, incidentally, is associated with many of the attributes we associate with "clear thinking": planning ahead, focus and concentration, goal-setting, time management.

But it's this area that's also been linked to emotion regulation, which may help explain the results of one recent study conducted by Harvard psychology professor Emily E. Bernstein. Like Postal, Bernstein is also a runner, and was curious about a pattern she saw in her own mind after a run. "I notice in myself that I just feel better when I'm active," she said. She started to become really interested in the intervention studies that have popped up in recent years that suggest if you can get people who are having trouble with mood or anxiety to exercise, it helps. "But why?" she wanted to know. "What is exercise actually doing?"

To find out, she did a version of a classic experiment among researchers who study emotion: She and her colleague -- Richard J. McNally, also of Harvard -- played a reliable tearjerker of a clip: the final scene of the 1979 film The Champ. Here, why don't you watch it for yourself and try not to cry:

Before watching the film clip, some of the 80 participants were made to jog for 30 minutes; others just stretched for the same amount of time. Afterward, all of them filled out surveys to indicate how bummed out the film had made them. Bernstein kept them busy for about 15 minutes after that, and surveyed them again about how they were feeling. Those who'd done the 30-minute run were more likely to have recovered from the emotional gut-punch than those who'd just stretched -- and, her results showed, the people who'd initially felt worse seemed to especially benefit from the run. Bernstein is currently doing a few follow-up research projects to determine exactly why this works the way it does. (In the meantime, it helps prove my poor boyfriend right, who, when I am not acting very nicely toward him, will often patiently ask me, "Hey, have you been on a run yet today?")

Related: Walking Groups Are Really Good for You

But there's another big mental benefit to gain from running, one that scientists haven't quiet yet managed to pin down to poke at and study: the wonderful way your mind drifts here and there as the miles go by. Mindfulness, or being here now, is a wonderful thing, and there is a seemingly ever-growing stack of scientific evidence showing the good it can bring to your life. And yet mindlessness -- daydreaming, or getting lost in your own weird thoughts -- is important, too. Consider, for example, this argument, taken from a 2013 article by a trio of psychologists in the journal Frontiers in Psychology:

We mind wander, by choice or by accident, because it produces tangible reward when measured against goals and aspirations that are personally meaningful. Having to reread a line of text three times because our attention has drifted away matters very little if that attention shift has allowed us to access a key insight, a precious memory or make sense of a troubling event. Pausing to reflect in the middle of telling a story is inconsequential if that pause allows us to retrieve a distant memory that makes the story more evocative and compelling. Losing a couple of minutes because we drove past our off ramp is a minor inconvenience if the attention lapse allowed us to finally understand why the boss was so upset by something we said in last week's meeting. Arriving home from the store without the eggs that necessitated the trip is a mere annoyance when weighed against coming to a decision to ask for a raise, leave a job, or go back to school.

Just because the benefits of losing yourself in your own thoughts are not easily measured doesn't mean they're not of value, and there are few ways I know of that induce this state of mind more reliably than a long run. A handful of recent studies have tried to answer what every runner, whether pro or hobbyist, has no doubt been asked by friends and family: What on earth do you think about while you're out there for so many miles? This, as the writer Haruki Murakami noted in his What I Talk About When I Talk About Running, is almost beside the point. Sometimes he thinks while on the run; sometimes, he doesn't. It doesn't really matter. "I just run. I run in void," he writes. "Or maybe I should put it the other way: I run in order to acquire a void."