My mother's family came from the town of Sinuiju in North Korea, although this is a fact rarely spoken of within my family. My great aunt has been the only one eager to talk about it and through her, I learned that she was the last from her family to cross the border between North and South Korea at the age of 14. She never saw her parents or youngest sister again, and to this day, none of us know what happened to them or the situation of any potential kin. Although a number of family reunions have occurred since the Korean Armistice Agreement, I've never hoped that we would find out these answers.

When I decided to visit North Korea, I had a lot of trepidation. Although it followed the peak of North Korea's most recent stint of "saber rattling," it was not so much for my safety as it was about ethics of such a trip and the uncertainty of what I would discover there. I was well aware that we would only be allowed to see a very limited portion of North Korea and that the tours would be highly controlled. I didn't want to go to participate in some sort of human safari and worried that my investment would somehow go towards supporting the regime. In such a seemingly controlled environment, I wasn't sure what, if anything, I would be able to garner from such a trip. In hindsight, I feel that there was a part of me that was afraid of what I would see.

Much of what I had read and heard prior about tourism in North Korea was true of my experience: you are not permitted to explore the city without the presence of your guides and every destination and stop on the tour is highly choreographed and controlled. Many stops on a typical tour could easily be tossed aside as more North Korean propaganda: monuments to the great leaders, an idyllic collective farm, impeccably maintained nurseries, showcases of astoundingly talented children. When you acknowledge the level of control that exists, you can begin to wonder about what you're not seeing and question the validity of what you are. You can get lost in these doubts and they will chase you as you leave and try to explain to people what you saw. 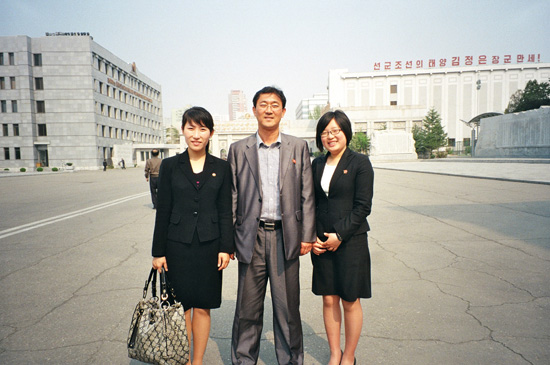 Yet, North Korea and its people did reveal itself in ways beyond what was being displayed. My relationship with the guides especially went further than I was led to believe was possible. Instead of watchful, policing "minders," our three guides were gracious, friendly, and kind citizens who drank with us, shared stories of their personal lives, and toasted to meeting us again upon Korea's reunification. U, 19, the student guide shadowing our trip, told us about her favorite movie (The Sound of Music), hobbies (playing piano with her friends), and traded tablets with us. She had already played Angry Birds on her "iPad." K, a male senior official at the KITC (Korean International Travel Company) helped me to improve my ping pong technique and was integral to elucidating any further questions we had about North Korea, from where they get their bicycles to current farming techniques. The head female guide, S, 27, shared with me the difficulties of dating in Pyongyang ("I just want someone tall and open minded"), gave my boyfriend unsolicited advice about how to treat a lady, and helped to translate whenever my Korean failed me in conversations with other citizens we met.

Through spontaneous encounters, interactions, sights, and conversations, other sides of North Korea were rendered. If you were willing to take them, there were opportunities to talk to, to interact, to look beyond what is already known about North Korea. What I experienced created impressions that were myriad, intangible and shifting; ultimately painting a complicated portrait of a place caught in seemingly impossible circumstances. There were things that were beautiful and mundane, nostalgic and surreal, familiar and foreign. Three generations of families picnicking, dancing, and singing together in Moranbong Park made me wonder at how times have changed. Lavish hotels and unfinished construction projects revealed plans of a greater future that never came. Monuments and propaganda that tout Korean unification spoke to a dream that can seem farther away now than ever. It felt like a place caught up in its historical trauma and sorrow as much as it was negotiating towards a future. Somewhere in the declarations and pomposity was the wistful hope that their statements were true. As much as the official script wanted to show a vision of control and strength, humanity is bound to slip in when the power goes out in the amusement park or a child takes a small tumble during his class presentation. The teacher laughed with us. 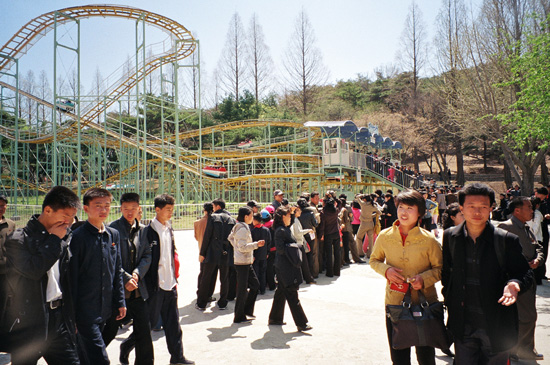 People have asked numerous times since I've returned whether or not I felt like I was able to see the "real" North Korea. It's a valid question, one that I would have asked myself before I went. Having gone, all I know is that I saw things that moved me, complicated my understanding, and made me want to know more. Coming back, I still find it hard to put a finger or words to paper to describe all that I felt. How does one ever come to know any place? Perhaps in North Korea this question feels heightened, but it is one that can never be fully answered, and in any case, can only be approached through experience and an open mind. Much of North Korea remains a mystery, but it feels less opaque and more penetrable than it was before. I know that I want to go back.

North Korea as Seen by a Tourist