I was strolling on the edge of a park in St. Petersburg, debating where to stop for coffee, when I heard a commotion on the opposite sidewalk.

A stout woman was chasing a stocky man. Judging by the sweat stain on the fugitive's shirt, they had been running for a good while.

St. Petersburg is no place to hurry. Its wide avenues invite you to promenade. To approach with slow admiration the spires and domes that punctuate its skies. To emulate, so far as you can, the poise of its beautiful women. That is exactly what I had been doing during this recent four-day trip. But I was to learn that when you're wired for leisure, confrontation can quickly turn bizarre.

"Thief!" the woman yelled, chugging along at a surprising speed on her short legs. "Thief!"

Perhaps St. Petersburg's lavish streetscape inspires magnanimity; perhaps the disturbance simply offended me. I crossed the street to see what I could do. By the time I had woven my way through traffic, two burly passers-by had stopped the fugitive and twisted him around to face the woman's wrath.

A high-volume debate ensued between the suspect and his accuser, obviously a tourist like me.

"Show me!" she screeched. "You show me everything!"

Apparently, she believed he had taken something of hers and hidden it in a shoulder bag he was carrying.

"You're crazy!" he yelled, throwing out a spiral-bound calendar and holding the bag open to show it was empty.

The burly men clung to their prisoner, unsure what to do. I hung nervously in the background. 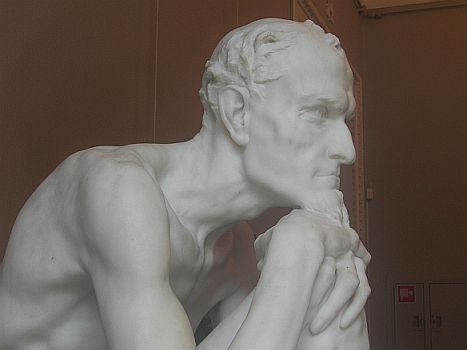 Now another man appeared and spoke to the two captors in Russian. His words must have been persuasive: They suddenly let the fugitive go and continued on their way. The mysterious intercessor himself melted away stage left before it could occur to me to wonder who he was. Meanwhile, the freed suspect walked stiffly in the opposite direction.

But the tourist would not let up. She stayed on the suspect's heels, yelling in his ear that he still had her money. Over his shoulder, he angrily denied it. I trailed tentatively behind, waiting for the right moment to intervene and stave off an explosion.

Too slow. Suddenly, the suspect spun and slapped at the woman's wrists. She threw up her hands; he shoved her, hard. She flew backwards into a wall of heavy, protruding bricks and hit the ground sitting upright. He ducked around the corner.

Three things caught my notice, each only for an instant. A tall, blonde woman absorbing the scene. The victim, out of a corner of my eye, stunned on the cement. And the possibility of giving chase.
I ran around the corner. Doubt flashed, but it was quickly drowned in a pleasant dash of adrenaline. I did not take time to analyze the scene - look for a policeman, a potential ally, or anything but the pavement ahead of me. Once a shock clears your mind of deliberations, it can be tempting not to let them back in.

"Hey!" I yelled, stupidly, in the manner of people dancing in a circle and cheering on somebody at the center. "Hey!"

Tourists stared from a sidewalk café. I was gaining on my quarry, and that felt good, too. Still, I was not sprinting my hardest, perhaps out of some vague awareness that I had no plan.

Near the end of the block, he slowed to a walk and stared at me over his shoulder.

"She is crrrazy!" he said as I approached. I dropped my run and stalked beside him.

"She is crrrrazy!" He motioned violently with his arms.

My blank mind had only felt good as long as I kept moving. Now, as I realized that I was clueless, a dew-like panic settled on me. He was at a loss, too. His eyes were wide with frustration; he seemed dumbfounded at still being pursued, especially by someone with no skin in the game. My confused thoughts tumbled out to fill the giant vacuum of bafflement between us.

I scolded like a camp counselor who tries to be both parent and pal. My naïveté could only have made him more confused - was I really trying to be on all sides of this dispute? Who was I to deem his first trespass pardonable and his second one wicked?

Before arriving in St. Petersburg, I had taken in some of the absurdist fiction of Nikolai Gogol, and this scene was hardly different. There I was, trying to reason about ethics with a street thief who had just knocked down a middle-aged woman in the midst of his getaway. There he was, pleading disingenuously for his innocence when he could have simply pushed me into the road, like he had done with the last clueless tourist. We were in a stalemate, each clear out of gut reactions and too wound-up to think.

A sudden blow to my head and ear sent me stumbling forward. As I caught my footing and picked up my glasses, I heard footsteps dashing away; I looked up to see the pickpocket and my invisible assailant disappearing around the corner.

My friends later gave me a well-deserved scolding. What were you thinking? What if he had a gun? All that for some money? I chided myself, too. Of course it was a stupid risk to take. There might be rare scenarios in which makes sense to pursue a criminal; this was not one of them. Worst of all, I had not bothered to check on the victim before succumbing to the dubious thrill of the chase. I had not, in other words, stopped to think.

In fact, the desperate situation seemed to rob both me and the pickpocket of our wits, strip us down to basic psychological impulses. I was driven, at least in part, by moralizing naïveté, he by dumb frustration. In their own way, both can be equally destructive. It was lucky for both of us that his faster-thinking accomplice came to his rescue a second time, and again with a minimalist intervention (in the form of a ding to my head). Later on I imagined bumping into the thief again around St. Petersburg. Maybe we could get coffee and compare notes to each do better next time.

More:
healthy livingSt. PetersburgRussiapsychologypanic
Newsletter Sign Up
The Morning Email
Wake up to the day's most important news.
Successfully Subscribed!
Realness delivered to your inbox