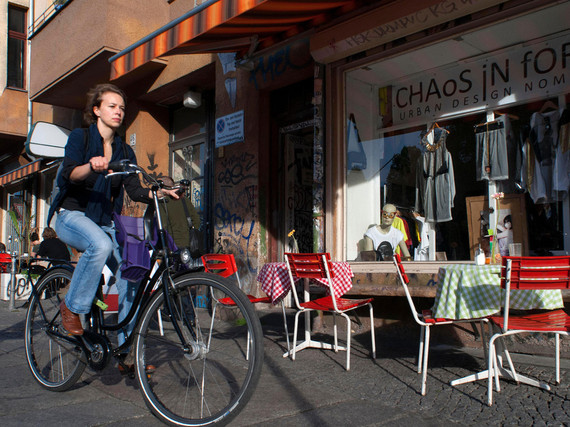 HOW TO GREET SOMEONE

Being home to so many nationalities, cultures and lifestyles, Berlin has no one set of rules for greeting people. Some go for the double kiss, some for the single, and others a nice hug.

In any case, you're safe with a standard handshake on your first encounter. Asking a polite "Wie geht's?" ("How are you?") is a good icebreaker, but too much enthusiasm might be considered a sign of superficiality. As a rule of thumb, straightforwardness is appreciated and rewarded with warmth. Another typical Berliner greeting is simply "Na!" which can also mean a number of other exclamations, such as "Well?" and "Yeah?"

Put your map away and enjoy getting lost in the city; you'll be surprised how diverse and charming the different districts are. West Berlin, for example, is enjoying a renaissance, and has recently changed in the eyes of many locals from boring no-go zone to the new and exciting place to be.

When walking around Berlin, remember that it's a cycling-friendly city. While people bike on main roads, most take advantage of the special red-bricked bike lanes, some of which extend onto the sidewalk. Avoid standing in the bike lane for the sake of not being yelled at or even hurt. Cyclists are required to use a bell (though not all comply), so listen for the warning signs.

See Also: How Not to Look Like a Tourist in Paris

WHERE TO EAT AND DRINK

Street food is big in Berlin, with tourists and locals alike attending events like Bite Club and Street Food Thursday -- both of which provide the perfect excuse to explore the dynamic neighborhood of Kreuzberg. Currywurst and döner kebabs are popular, and for good reason.

While beer remains ubiquitous in the German capital, no local would ever consider ordering a Berliner Weiße. Once the city's favorite alcoholic drink, the beer has largely lost its appeal and special brewing technique, and can often be weak or bitter. Instead, drop into a Spaetkauf (or Spaeti for short -- a small shop selling snacks, drinks, and newspapers) and choose from the wide variety of bottled beers. Such is the quality of German beer that it's almost impossible to go wrong.

Practicality, not beauty, is what drives most Berliners when they choose their outfit for the day. The city is laid back when it comes to dress code, and in summer it's incredibly liberating to throw on a pair of shorts and flip-flops and wander around the city. Berliners are not discomfited by sparsely dressed people; likewise, the business culture is generally casual and non-conformist, so you won't see many people in suits.

There are opportunities to get dressed up though; for example, a trip to the Berlin Philharmonic or the opera calls for traditionally formal evening wear.

Bear in mind that during winter things get chilly, with the average January temperature hovering around freezing. Do as the locals do and layer up with thermal underwear, stylish sweaters, hats, gloves, scarves, and a thick coat.

HOW TO WALK AND TALK

Don't: Jaywalk. Germans always wait for the green light before crossing the street. There is a fine for jaywalking, but the real price is the disapproving looks from locals, especially if there are children present.

Don't: Make jokes about Berlin's 20th-century history. That said, intelligent debates on the topic are welcomed and encouraged.

Do: Ask before you photograph someone. Taking snapshots of people without their consent is effectively illegal in Germany.

Do: Ask "Sprechen Sie Englisch?" (Do you speak English?) when interacting with locals. Berliners are famously excellent at English, but it's always polite to ask rather than assume. Bring your phrasebook; some basic language skills go a long way.

Do: Use public transportation. It's efficient and easy to navigate, and gives you a real feel for the city.

As Europe's clubbing capital, Berlin attracts hundreds of thousands of "techno tourists" each year. They city's best-known club, Berghain, has a famously fickle door policy, and the formula for success has been widely discussed. Suffice to say, large well-dressed groups speaking English loudly are not likely to get in.

The Friendliest and Unfriendliest Cities in the U.S.