It is easy for progressives to blame the Republicans for the sequestration and to view President Obama as having waged a last-ditch effort against these cuts. This is too easy. Many have been confused by focusing on Obama's eloquent speeches and progressive vision while missing his actual budget policies.

Since Reagan came to office in 1981, the Republicans have been out to destroy the federal government by "starving the beast" of revenues. Following the Reagan tax cuts in the 1980s, they instituted a new round of temporary tax cuts a decade ago in the Bush Administration (with an expiration date of 2010). And yet who became the lead champion for making the temporary Bush tax cuts permanent? The Democrats.

Obama campaigned to make the tax cuts permanent for 98 percent of households, and restore the pre-Bush rates only for the top 2 percent of households. This policy made it look like Obama was on the side of raising government revenues, and compared with the far-right Republicans, he was. Yet by making most of the temporary tax cuts permanent he sided de facto with the Republican campaign to undermine government by reducing revenues.

On New Year's Day, Obama and the Republicans agreed to make the Bush tax cuts permanent for 99 percent of households, excluding married couples with incomes above $450,000. They also agreed to keep low tax rates on dividends and capital gains. This "deal" will cost the federal budget an average of around $400 billion per year in foregone revenues during the coming decade, or roughly 2 percent of GDP each year. Once that deal was done the stark shrinkage of discretionary government programs became inevitable.

Obama's budget approach -- far too beholden to tax and spending cuts -- has been in plain view since 2009. (I worried about it from the start. See my Time magazine piece in January of that year for more detail.) To stake out his low-tax position, he has repeatedly proposed budgets that actually slash the share of discretionary spending in national income. People have rarely recognized the contradiction between Obama's progressive speeches and his regressive budgets.

Have a look at Figure 1. The blue line shows the size of the discretionary budget as a share of GDP as proposed by Obama in 2009. The green line shows the actual trajectory that we are on now that sequestration has gone into effect, according to the most recent estimates of the Congressional Budget Office.

The two lines are nearly the same. The shrinkage of government is not a sudden accident. It has been in Obama's own budgets since 2009. We are on track, just a bad one.

How did we come to this? For a while Obama pretended that he could expand government without paying for it. He did this by arguing for a while that deficits and debts are harmless. That phase of crude Keynesianism lasted until mid-2011 (Paul Krugman is one of the remaining holdouts). Since 2011, Obama agreed with the Republicans on limits to discretionary spending, leading to the budget sequester this past week.

Why would an ostensibly progressive president act this way? The answer is simple. To win two presidential elections, Obama decided he had to champion tax cuts for almost all Americans. Now the painful fiscal arithmetic is catching up with him, and more importantly, us.

Obama is now urgently calling for added revenues, but he no longer has political leverage, having agreed to the permanent extension of the Bush tax cuts without securing any alternative revenue package in its place. That's been par for the course. We are still in the era of political theater.

A true progressive agenda -- and it will come -- should do the following. First, it will make specific proposals for key areas of government (education, technology, infrastructure, training, etc.) based on the government paying its way rather than ramping up massive debts. That will require higher tax revenues as a share of GDP.

Second, it will aggressively go after wasteful federal spending. That means cutting the military budget sharply (from around 5 percent of GDP to 3 percent of GDP or less). That means real reform next time around of the healthcare system, a reform that takes on the American Medical Association, inflated drug prices, excessive tests, and bloated management costs of private insurers. Overall America could save around $750 billion per year (5 percent of GDP) in lower health care costs, with the federal government budget saving 30-40 percent of that.

Third, it means going after higher tax revenues, including the following: a shutdown of overseas tax havens, an end of deferral on overseas corporate income, an end to carried interest, an end to abusive transfer pricing by corporations, a rise in dividend tax rates, a cap on healthcare deductions for high-end policies, a tax on carbon emissions, a tax on high net worth, and a tax on financial transactions.

The policies of the past five years have led us to budget sequestration. The politics of the next five years should lead to a true revival of the progressive agenda, including a cut of wasteful federal spending, a program of expanded investments in key sectors that is carefully designed and implemented over the coming decade, and a tax system that pays our way. These are the keys to an economically prosperous, socially inclusive, and environmentally sustainable 21st-century nation.

Figure 1. Discretionary spending comparison of Obama's 2009 Budget and the new Post-Sequestration Baseline of the Congressional Budget Office. Outlays as % of GDP. 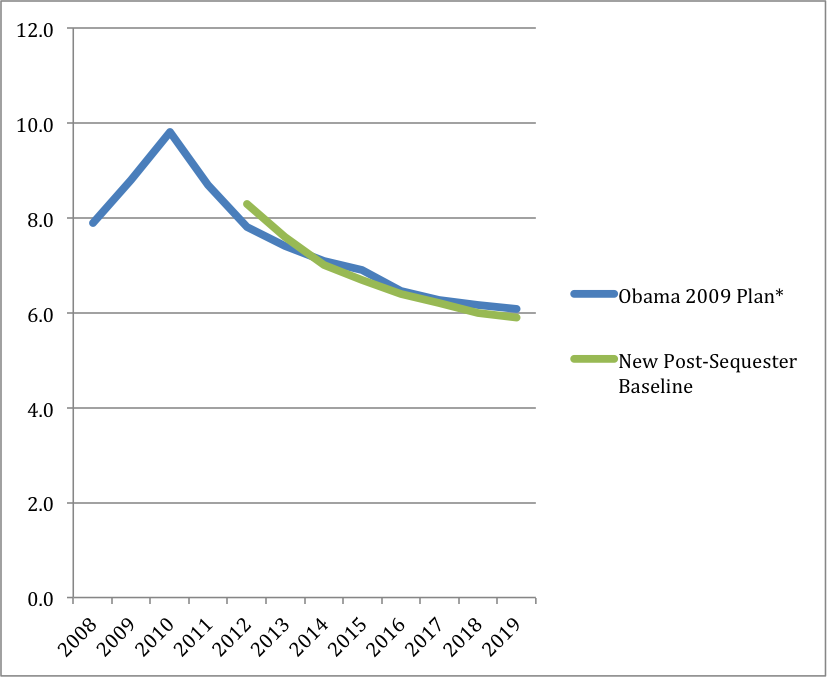 *I have slightly adjusted the 2009 Obama plan to reduce overseas "contingency" war outlays by $50 billion per year as per Obama's 2012 budget.