Setting limits is super important! Children thrive when we hold high expectations and set limits for them. Yet there is a myth in the world of attachment parenting and connective parenting philosophies that setting limits is punishment.

I don't believe this is true. The problem as I see it lies in the fact that most of us have only ever experienced or seen limits being set as a form of punishment. That's been our model. It might be in the tone: "No! You may not have another Christmas cookie!" Or there might be an actual consequence threatened: "If you eat another Christmas cookie, you will not have dessert for the rest of the week." For those of us who reject the Behaviorist approach of rewards and punishments, neither sits well.

In actuality, setting limits is a gift to our children. It shows them that we are taking responsibility for keeping them safe. It's a sign to them that we are there to help them mediate the chaos of this world. It let's them know that we hold high expectations for them and believe in their ability to reach their goals and achieve great things.

But setting limits is hard, and doing it well, I think, requires shifting our paradigm about how we interpret children's behavior. Rather than succumbing to our buttons being pushed and labeling our kids as "bad" when they show us ugly behaviors, I want to suggest that we see those behaviors as calls for help.

Let's say our 3-year-old is demanding pizza for dinner. If we can see that insistence on having pizza for dinner, that rigidity in his request, as a call for help, and even as asking for a limit, it becomes much easier for us as parents to keep our own feelings in check and set limits calmly, lovingly, and effectively.

"Hmm," I might think to myself. "We never eat pizza in our house. The fact that my son is demanding we do so tonight must mean that there's something else going on with him."

Because that is usually the case.

Most often when our children are fixated on something they can't have, or are doing something they know we don't allow, there's something brewing for them below the surface, and the insistence on pizza, for example, is their three-year-old way of communicating, "I felt really scared today at daycare when I grabbed Jonny's toy and the teacher put me on a time out," or whatever else might have happened. Our young children can't yet articulate their feelings so eloquently, so they let us know they're feeling hurt the best way they can figure out to do so - in this case by insisting on pizza for dinner.

If you look at the situation from this new perspective, then saying no to pizza need not be done in anger, and we need not punish our child for being stubborn or rude, for example. Instead, we can choose to see the situation as a call for help and take it as an opportunity to support our child through their struggle.

Well, you might be surprised that the most overlooked step in setting limits is one of the most important: taking the time to scan the scene and decide whether or not a limit makes sense in any given situation. Too often, we fall into our own trap and set a limit "because that's the rule!" But life isn't a computer program, where we can predict the future or be certain of how one move will influence the next. Life happens in real time. Your daughter wants to know if she can have another cookie. Now. But that "now" can look like a third cookie at a special birthday celebration in the middle of the day, or a "just one cookie" as you're headed up to brush teeth...

Here's a recent example of how I was able to set limits well by not setting them. One of my sons had finished all his homework, we had eaten dinner, and he wanted some computer time. Generally my boys get one half-hour of playtime on the computer per week on Sunday mornings. The pull was to say out loud in an annoyed voice something to the effect of, "You know we don't play computer games during the week!" Instead, I stopped myself, took a deep breath, considered the important factors to me (prioritizing what needed to get done, time, my availability), and decided there really was no good reason to say no.

"Yes!" he cheered, as he grinned ear to ear. 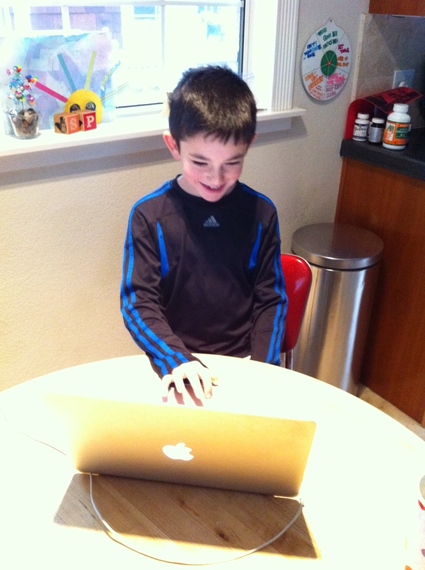 We both felt good. I knew I had made the right decision, and I was grateful to have taken that 30 seconds of decision-making time!

What we're going for here is flexibility. We want to model the same calmness and flexibility in thinking we're trying to teach our kids. We need to remember that every situation is a new one. It has never happened before. And we have the intelligence and can make a conscious choice to take in all the relevant factors and come up with a decision that makes sense in any particular moment.

My next piece will explore what to do when you decide a limit is in order. How do you set that limit, and what can you expect from your child?