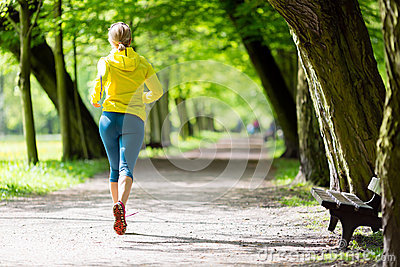 I'm the mother of three champion long distance runners. I honestly don't know how that happened, since I was never a runner. But I showed up at almost every race, bellowing, "Go, go, go!" in the best imitation of my days as a high school varsity cheerleader. Then I'd go home and eat cookies on the couch.

Time passed. My kids left home and continued to run--two of them recently ran a 50K race. (Yes, you read that right.) Meanwhile, my butt has gotten wider and my belly softer. I'm a writer, not a runner.

Then, one day, I spotted an ad in our local paper for a "Couch to 5K" program run by Nancy McCarthy, a fitness trainer at Natural High Fitness Club in Newburyport, Massachusetts.

"I can't afford it," I thought, as I emailed Nancy for details about the program.

She emailed back and said it was free. "Hope to see you there!"

I snorted and emailed back. "I'm afraid I'm too old. My knees bother me on stairs."

"We start very slowly," she promised. "Come join us!"

I probably wouldn't do it it, I thought, but I needed sneakers anyway, so I went to the local running store and bought a pair on sale. I brought them home and, just for laughs, went for a run. My feet were crippled afterward. My lungs burned.

"You might need to buy running shoes a half size up," she explained. "That's what I do."

"I can't afford another pair."

"They'll take them back."

Amazingly, the store exchanged the shoes (three cheers for The Greater Boston Running Company in Newburyport), even though I'd already worn them, had no receipt, and had recycled the box. "No problem," the cheerful (and very fit) sales clerk said.

Saturday dawned bright and sunny, and I had run out of excuses. I drove to the local high school track and met the coach, Nancy, who was every bit as chipper as her emails: an older woman with the body of a woman in her twenties. She and Beth H. Macy are filming this Couch to 5K program as an inspirational documentary, "A Long Way for a Short Run." About three dozen people were gathered on the track.

At the sight of the camera, I pulled my sweatshirt down over my hips and wished I'd worn something on my head other than my daughter's Rastafarian striped wool hat.

"I have three words for you to remember," Nancy said, as she explained the program and the possibility of some of us being ready to run a 5K as soon as Mother's Day. "Prepare, believe, achieve."

We were preparing to run the 5K starting today, she said. Now we had to believe in ourselves enough to stick with the program--twenty minutes, three times a week--and we would achieve our goal. It was as simple as that.

I set off in the middle of the pack. The twenty minutes flew by. I was winded, yes, but I was still upright and breathing. My knees didn't feel a thing. I shed my jacket, then my hat and gloves. I was here. I was making it through the first day. Maybe I'd come on Monday and make it through a second training session.

"Each race starts with the first step," I heard a woman encourage her friend huffing along on the track beside me.

Suddenly, it dawned on me: "Prepare, believe, achieve" is the perfect motto for my fiction writing. I've been feeling a little down about my fiction lately, since the book I'm writing now is partly historical fiction, a genre that's way outside my comfort zone. To be perfectly honest, I have no idea what I'm doing, so I've been doing a lot of reading and research. I have felt like a nonproductive procrastinator, because I'm not committing words to the page yet.

If I can believe in myself enough to keep up this preparation, gradually working my way up to actually writing the manuscript a sentence at a time, I will figure things out.

And, if I prepare and believe in myself, I will achieve my goals.

So I'm up off the couch. One step at a time, I will reach the finish line of that 5K, and I will write this novel.