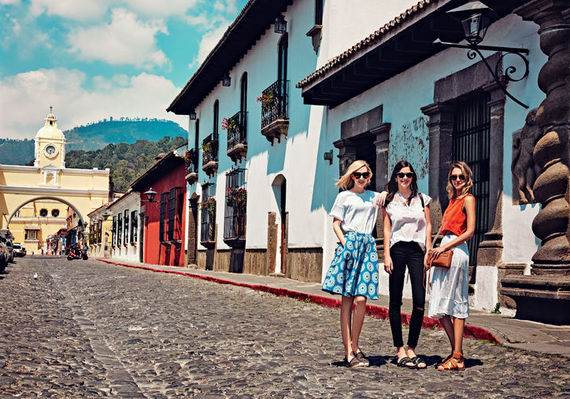 What's a handbag got to do with #girlpower? I travel to Guatemala with Jessica Alba and designer Rebecca Minkoff to get the scoop.

It's 7:00 A.M. in Antigua, Guatemala, and we're tumbling down a cobblestone road in a rickety old van. It is perhaps the last place you would expect to find Jessica Alba and Rebecca Minkoff, two women who inhabit the glamorous worlds of Hollywood and fashion, respectively. But then both have made a business of traveling off the beaten path--Alba, by putting her movie career on the back burner to spearhead The Honest Company, a now billion-dollar business of eco-friendly products; Minkoff, by building her millennial fashion and accessory brand through unconventional social platforms and collaborations. They've come to Guatemala to source textiles and, ultimately, collaborate on making bags in partnership with FINCA, a global organization that gives small-business loans in developing countries (more on that later). Smushed into the vehicle with us is a staffer from The Honest Company, two representatives from FINCA, Alba's childhood BFF who doubles as her makeup artist ("I didn't wake up like this," Alba deadpans), two security guards, our photographer, and Minkoff's director husband. We have a two-hour commute ahead, and Alba and Minkoff are using the downtime to go about business as usual--answering emails, brainstorming ideas, and, in Minkoff's case, pumping breast milk for her six-month-old daughter back home (impressive in a moving vehicle!). The camplike atmosphere also inspires some spirited conversations: We touch on DILFs, baby ear-piercing ("she's going to have to man up," Alba says of her daughter), and the time Minkoff accidentally put breast milk in her coffee. "It tastes really gamey," she informs us, to laughter all around.

It's easy to see why Alba and Minkoff like each other. Not only are both driven 34-year-old entrepreneurs and mothers of two, but they're also grounded by a realness that is rare in their industries. The first time they met, says Minkoff, "Jessica was like, 'Give me your phone.' She put her number in it, and from there it was a love affair over text messages. I said, 'Next time you're in town, come in.' And that's when I pitched her the idea." Their collaboration will create jobs for artisans in the developing world, and proceeds go to support FINCA's mission, which includes training female entrepreneurs in countries where there is little infrastructure to help them. (As for how I came into the picture, Minkoff and I are friends and neighbors, and even though I had never met Alba before the trip, I instantly liked her: Under the mega-babe facade, she's a kick-ass, whip-smart businesswoman. "This is a chance to help another woman be self-empowered and provide for her family," says Minkoff. That's an objective they relate to: "We're entrepreneurs, so that passion comes from a very real place for both of us," says Alba. "Rebecca and I know firsthand how difficult it is to start a company and stay in business. To not have any resources on top of that? FINCA gives these people an opportunity."

When we arrive at Lake Atitlán, an oasis of water surrounded by volcanoes, a boat takes us to a nearby village, where we hike through a maze of roads before finally entering an adobe hut that serves as a meeting place for a group of six female weavers, as well as home for two of them. Work and domestic life all happen under one roof here; there is no such luxury as day care, so babies are swaddled to their mothers' backs while the moms go about their business. And the business of making textiles is impressive: Plant leaves are used to dye the yarns in pots of boiling water. Traditional wood looms are used for the weaving. There is nothing remotely resembling a machine in sight, and in fact, there's little electricity or plumbing either. What we're all most struck by is the workmanship that goes into each piece. "So much of what is made in the world today is manufactured, and there isn't a face behind it," says Alba. "It's really cool to know there's a human touch."

Later, as we head to our next destination, Alba suggests that she and Minkoff number each bag and include a hang tag with photos and a story behind the women who created the textiles for it. "If you can put a face to something, it makes it more special," she says. The collaboration consists of two bags: a tote and a pouch, at right. "It's an everything bag," says Alba of the tote, which can function as anything from a diaper bag to a gym sack.

We visit four co-ops over the course of our two-and-a-half-day trip, all separated by many miles. It is a rare opportunity to see the beautiful landscape and craftsmanship that exists in Guatemala, where weaving is the biggest industry after agriculture in the region, and also to observe an intimate side of the country that isn't typically accessible to tourists. Despite the fact that 80 percent of the indigenous population lives in poverty, the people here project warmth and take rightful pride in the work they do, welcoming us into their homes, eager to share their craft (one group even stages a dance performance for us). Woven into each textile is a strong sense of heritage and tradition.

And empowering these women makes a difference. In Guatemala, girls traditionally stop attending school at around 10 years of age to help take care of their younger siblings, while their brothers continue to receive an education. However, as more and more women become financially independent through small businesses like those we're visiting, they not only help pull their communities out of poverty, but they also force cultures to acknowledge the power of their female citizens. "Not to be a man basher," says Alba, "but investing in women is such an untapped resource."

Alba relates to the circumstances of these women in a real way. Back in California, her own parents were barely out of their teens when they had her, and they struggled to make ends meet. "My dad joined the Air Force so he could get paid and go to business school," she says. "And my mom regularly worked three jobs at a time. Hollywood was so far outside the scope of my reality. But my mom was my biggest supporter; I wouldn't have been able to do it without her. And in Guatemala the women will do anything to give their kids a better life."

At lunch on our last day in Antigua, Alba arm-twists her security guards to loosen their grip and directs us to a tiny restaurant she's discovered. There's a lovely courtyard in the back, and we order rosé and enjoy a moment of peace under an awning of trees. Until...splat! A bird poops directly on Minkoff and me. Alba quickly jumps to our rescue (with a pack of Honest wipes, naturally), and we write off the incident as a sign of luck--and good fortune for the mission Alba and Minkoff take so seriously. "The end goal is to have a healthier, happier world," says Alba. "And come hell or high water, we're going to get it done."

More from Glamour:
10 Things He's Thinking When You're Naked
56 Phenomenal Wedding Dresses That Will Make Your Heart Skip A Beat
What Guys Really Think About Your Bra
What's That Salad the Kardashians Are Always Eating?
10 Makeup Tips Every Woman Should Know
6 Things Men Never Notice During Sex