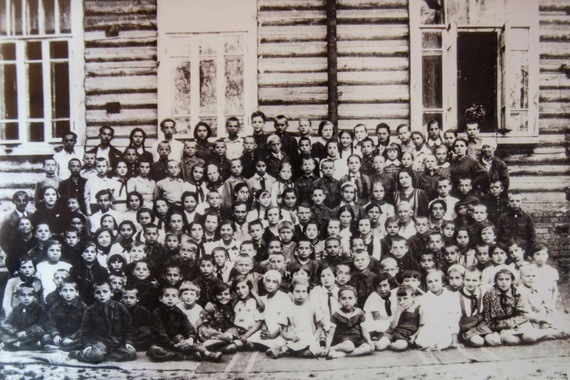 Nearly 75 years ago, the Nazis launched Operation Barbarossa, a massive invasion of the Soviet Union, in which 4.5 million Axis soldiers surprised the Soviets with blitzkrieg attacks across the 2,900-kilometer border.

Although Germany had signed a non-aggression pact with the USSR in 1939, Hitler broke the agreement and on June 22, 1941, Germany carried out what was to be one of the largest and deadliest military operations in history in its attempt to conquer the Soviet Union.

Caught in the middle of the attacks were 300 children at a Soviet Pioneer Camp in the summer vacation spot of Druskininkai, Lithuania.

Zeev Balgali, 15, and Yitzhak (Isser) Niv, nine, were among the 140 Jewish children taking part in the Soviet scout camp along with 160 other participants who were not Jewish, including Polish and Lithuanian youth. The Jewish children were from Bialystok, a Soviet-controlled city in northeastern Poland, and the surrounding region, which was eventually seized by the invading German troops.

Pevzner boarded the 300 children onto a train that was originally intended for Bialystok so that the children could return to their parents.

However, the aerial attacks had devastated the Bialystok area, so the conductor continued to the Soviet border, at which point he refused to go any further. Pevzner knew that the only safe place for the children would be deep into Soviet territory, so he threatened the conductor with his empty gun, forcing him to reluctantly continue with the dangerous journey. After a harrowing 12 days, the entire group of children, together with Pevzner, made it to the safety of the Ural Mountains in western Russia.

"Shmuil Pevzner is the angel who saved us," said Zeev Balgali, today 90, to the Jerusalem Post Magazine in a recent interview.

"He took care of us and made sure that each one of us was safe. We can never forget this man -- he was both a father and mother to us kids."

Balgali clearly remembers the chaos at the Druskininkai train station on that June morning in 1941 as masses of people frantically converged at the train station, trying to escape the vacation town.

"We woke up that morning to the sound of explosions. When we arrived at the train station, everyone was trying to leave. Pevzner made sure that all 300 children boarded the last train out amid all the chaos -- he even carried some of the children and put them on the train through the windows.

During the journey, the train came under repeated German aerial attack.

"There were bombings all the way, and we could even make out the faces of the German pilots -- they flew that close to us. Every time the German attack planes approached, we would have to get off the train and take cover in the fields and forests," Balgali recalled.

Pevzner kept a dedicated eye on the children throughout the journey. At one point, a young boy went missing after fleeing the aerial bombardment with the other kids. Pevzner refused to allow the train to continue until the child was located, said Balgali. Eventually an older Jewish youth from Bialystok found the boy -- he had fallen asleep on a pile of hay.

In another incident, Pevzner was injured in a bombing when the train stopped for food rations at a city along the way. Forced to stay behind to get medical attention, Pevzner managed to catch up with the children on the next train.

Once the group reached Udmurtia, a region in the Ural Mountains of western Russia, Pevzner continued to care for the children for the next five years, establishing a home for the children under the Soviet government's patronage, where they remained for the rest of the war.

"The conditions weren't easy -- the harsh cold weather of 40° below zero was hard for us to get used to, and there were limited supplies," said Balgali.

Pevzner also made sure that the children received a good education.

"He brought us the best teachers from Leningrad, who know how to teach well," said Balgali. 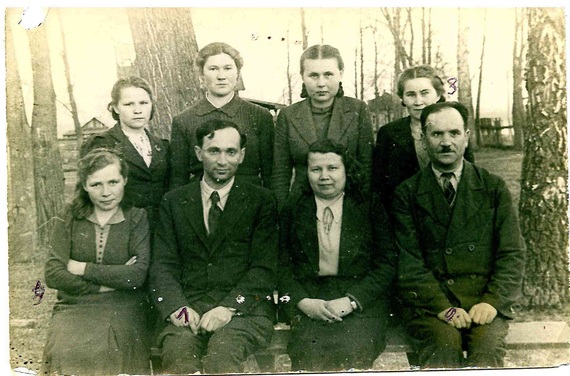 Meanwhile, as the Bialystok children took refuge in Pevzner's orphanage in Udmurtia, the Nazis had taken over their home city, where their families were among 50,000 Jews who lived there at the time. On June 27, 1941, the Nazis entered Bialystok, murdering some 2,000 Jews in one day, as they set the city's main synagogue and Jewish quarter on fire and drove all the Jews they could capture into the fire. The Nazis ordered a ghetto established, from there thousands of Jews were deported to death camps and killed. At the end of the Holocaust, 1,085 Jews remained in Bialystok; of the ghetto inhabitants, only 260 survived the deportation camps, and some others as members of partisan units.

When the 140 Jewish children under Pevzner's care returned to Poland after the war to find their families, only four found surviving parents. Balgali was one of those who found that his mother and his sister had survived.

"I was one of the four kids who found a parent alive," said Balgali. He recalls that it took him a while to learn how to speak Yiddish again.

"I had forgotten how to speak Yiddish with my mother because we only spoke Russian at the school for the five years we were there."

Balgali noted that never felt an anti-Semitism during his time in Udmurtia or when he enlisted to serve the Russian army.

"We didn't experience any anti-Semitism until we returned to Poland after the war," he said.

Once in Poland, the underground organization known as the Bricha, which helped Holocaust survivors escape post-WWII Europe to Palestine, helped the Jewish children of Bialystok reach Eretz Yisrael. The first group of 50 children left to Israel from France on the illegal immigrant ship Theodor Herzl, which was intercepted at sea by a British warship.

Several passengers, including some of the children, were wounded, and taken ashore to the Atlit detention camp 20 kilometers south of Haifa. The rest of the children and passengers were transferred to a detention camp in Cyprus, where they spent the next seven months until they were allowed to immigrate to Israel in December 1947.

Back in Udmurtia, Pevzner married one of the older girls he had rescued, and the couple stayed there to raise their family while Pevzner worked as an educator. He remained in contact with the children he had rescued throughout his entire life.

Among the 120 Bialystok children who made aliya over time, there was a feeling that their heroic rescuer was never properly recognized. While Pevzner was decorated by Poland and the Soviet Union for his rescue of the children, he was relatively unknown in Israel except by the survivors. Indeed in 1997, when Yad Vashem recognized Stasys Sviderkis, the director of the Lithuanian troop at the Soviet Pioneer Camp, as Righteous Among the Nations for his role in the rescue of the children as a non-Jew, Pevzner was not mentioned.

"For a long time we looked for a way to honor Shmuil Pevzner," said Yitzhak Niv, who today is 84. "He was a very special man with a heart full of warmth and wisdom," said Niv.

"He even came to visit us once in Israel. He traveled across the country and reunited with the Bialystok children he saved and met the families they created."

"Thanks to Shmuil, none of us turned out criminals. We went on to become accountants, engineers, doctors, nurses, fathers and mothers, and just good people who contributed to the building of the State of Israel," he added.

"It was important for us that Shmuil receive the recognition he deserved."

Last year, when Niv and Balgali came across the news story of the Holocaust memorial event that commemorated the heroism of Jews who rescued fellow Jews during the Holocaust, they knew immediately they had to share Pevzner's story with the event's organizers.

For the past 13 years, the B'nai B'rith World Center in Jerusalem and Keren Kayemeth LeIsrael (KKL-JNF) have held a unique joint commemoration ceremony on Holocaust Remembrance Day recognizing Jewish heroism during the Holocaust.

Subsequently, Niv and Balgali contacted Alan Schneider, the director of the B'nai B'rith World Center in Jerusalem, and told him about Pevzner.

"Zeev and Yitzhak were very excited and determined to have Shmuel Pevzner recognized," recalled Schneider.

"I had never heard of Shmuil Markowitz Pevzner before," admitted Schneider, who has invested years of effort recovering rescue stories of Jews in the Holocaust.

As a member of the Committee to Recognize the Heroism of Jewish Rescuers During the Holocaust (JRJ), which was established by Holocaust survivors and rescuers some 15 years ago, Schneider has worked tirelessly to make the public aware of the many Jews who endangered themselves in order to rescue their brethren from imminent death during the Holocaust.

"Through this year's ceremony and citation, the organizers seek to right the historical record by giving due recognition to Shmuil Markowitz Pevzner for rescuing these vulnerable children, some as young as seven, and all but four of whom were orphaned by the war's end," explained Schneider.

"We salute Pevzner's dedication to the children, supporting them through emotional and physical hardships to become upstanding adolescents and adults," Schneider said. 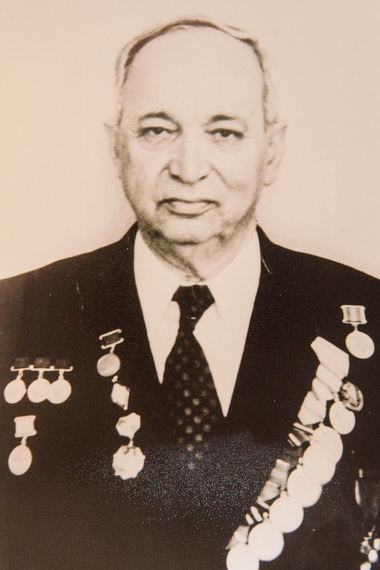 Shmuil Pevzner decorated with medals from the Polish and Russian governments for rescue of the children. (Courtesy: B'nai B'rith World Center)

Pevzner's son, Dr. Mark Pevzner and his grandson, Boris Pevzner, who reside in Udmurtia, recently traveled to Israel to represent Pevzner at the KKL-JNF Holocaust Day Ceremony at the B'nai B'rith Martyrs' Forest "Scroll of Fire" Plaza on May 5. Dr. Mark Pevzner told the Magazine that he was very moved to be in Israel as part of the ceremony recognizing his father's efforts and thanked B'nai B'rith for honoring his father with the Jewish Rescuers Citation.

"My father saw God's hand in the effort to rescue the children during the Holocaust, and I see in this commemoration of my father's work, God's hand as well.

For Yitzhak Niv and Zeev Balgali, what was probably Pevzner's most important quality was his ability to see a bright future in bleak times for his young charges.

"I got married, had two daughters, and today have six grandchildren - and this is all thanks to Shmuil Pevzner," said Niv.

"He knew how to take care of us at a time when no one else could, so that we could have a future."

This article was originally published in the Jerusalem Post Magazine.