Just over a year ago, I was exhausted. By the time Thursday night rolled around each week, I'd be completely shattered.

My daily commute of three and a half hours (on a good day) had me out of the house and into the cold winter darkness well before sunrise and not returning before it was pitch black again -- twelve hours later at the earliest.

And in spite of how excruciating it was to see so little of my only child, by Thursday night, I couldn't keep up even a flimsy pretense of giving my 10-year-old son any kind of real attention as he meandered through the intricacies of his latest Lego creation. 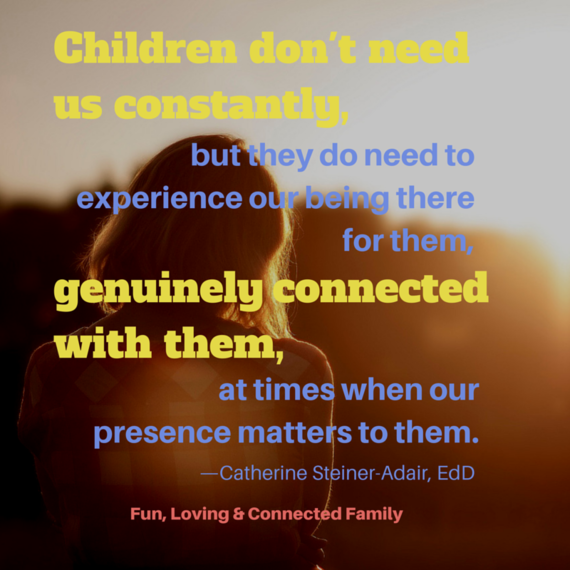 Added to the fatigue of never feeling that I had enough hours in the day was my active search for a better job that, with any luck, would be much closer to home.

Very quickly, I became exceptionally fine-tuned to any pings from my smartphone -- those alerts of calls, texts or emails could be the news that I so urgently wanted to hear. And so my smartphone took precedence in our lives -- regardless of whether it interrupted meal times, bath times, countryside walks on the weekend or even during what had always been our favorite time of day: story time.

But there's one Thursday evening that stands out from all the rest. My phone pinged and I didn't even hesitate to abruptly break away from reading the penultimate chapter of Around the World in Eighty Days.

As I was focusing on my response to a promising email, my son followed me out of his bedroom. At first, I felt frustrated by his presence and sharply irritated by the distraction of what he was telling me -- or rather trying to tell me.

But this time was different -- whether it was the listlessness in his voice or the fact that he didn't even try to make eye contact -- something woke up in me as I realized in that moment he no longer expected my attention.... much less my full and caring attention.

My son no longer expected me to engage, react or care about what he had to say, and not just then, but in all the innumerable times before, when, without even looking up from my phone, I would put up my hand to stop him trying to connect and say, "Just a sec, just let me answer this..."

How I behaved broke my heart. But more importantly, it woke me up. 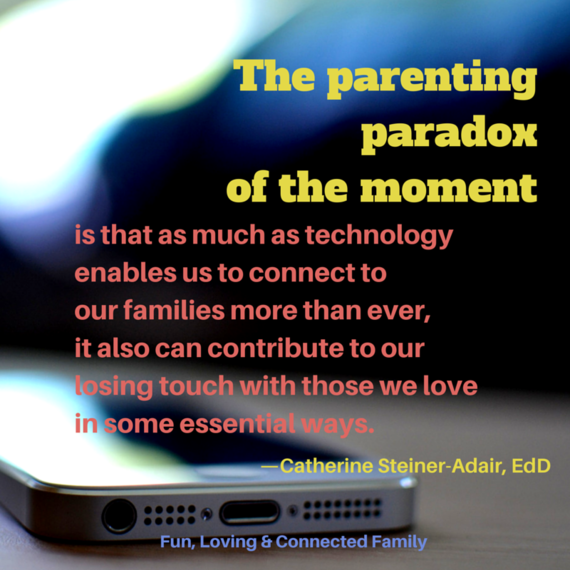 I'm not here to add more guilt to the parental paradigm -- balancing work and family is hard for moms and dads. But for myself, on that Thursday night, I realized I had been sleepwalking into outsourcing parenting with the seemingly innocuous solution that technology provides.

What started as "emergency" stop-gaps had quickly morphed into letting my son spend yet another hour online so I could catch up with emails and answer texts. These episodes had very quickly become habits -- habits that were easy to justify as the sole breadwinner of our lone parent family.

So just one year later, after many small adaptations in how I parent as well as some massive changes that included getting fired from that awful job and an international move, I had the privilege of sitting down with Dr. Catherine Steiner-Adair, author of The Big Disconnect: Protecting Childhood and Family Relationships to ask my most burning questions about parenting in what she calls our Digital Age of Disconnection.

LR: In our age of unprecedented, continuous change, as parents we feel that we are losing a meaningful connection with our children and our children are feeling lonely and isolated -- why is that?

CSA: Since the introduction of smart phones, we've seen a 40% increase in the extent to which parents and children report feeling lonely in their own households -- which is very sad because in just eight years, our cultural and familial norms have changed so dramatically.

And at so many levels, we're not in control of our relationship to both ourselves and our technology which then interferes with our ability to create and be in control of the qualities of the kinds of connection we want with our kids and our kids want with us.

"I'm sympathetic to the fact that parents now are struggling because we've lost the boundary between work and home with tech."
--Dr Catherine Steiner-Adair

You can read my full interview with Dr Steiner-Adair here.

Here to give families a rock solid connection so our kids have a safe haven as they navigate the sea change from childhood to adolescence.