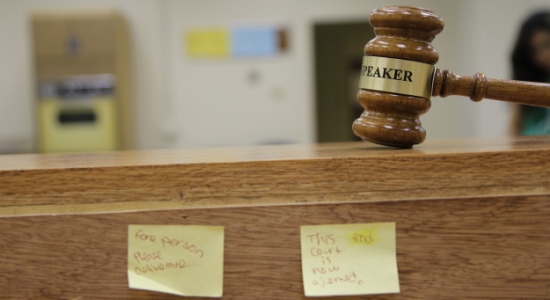 Suspending and expelling students has become commonplace in many states including California. Recent records show more than 700,000 students suspended and 18,000 expelled last school year. Students being removed at the highest rates are black and Latino.

Robert is a talkative sixth grader in Richmond, Calif. He's been suspended three times. “Sometimes when you get in trouble if you really really think about it, you might just say... wow, why did I just did that? If I get suspended one more time I might get expelled,” he said.

Getting expelled may sound extreme for a kid as young as Robert. But data in California from a few years ago, show almost half of expulsions fell into vague categories including "defying authority" and "disruption of school activities."

Some teachers say suspending students from school doesn't change the behavior; it just puts kids further behind. And that can make it extra hard for little kids who rack up multiple suspensions while they are still in elementary school.

Megan Macpherson is an elementary school teacher in Richmond. “If I'm in the middle of a math unit, and students are gone, that’s five new objectives they don't get to learn. That's the most stressful part, catching up a student,” she said. “So sometimes I really disagree with suspensions. In past years, it’s been really hard to keep kids invested in school because once they fall behind, it’s embarrassing to be behind their peers, and to take that risk to try, it’s almost too much….It’s hard for the class sometimes, especially when there are collective goals we are trying to meet,” she added.

Macpherson’s concern about discipline and student investment is something you hear a lot from adults in this district. Many of her students -- if they do stay invested -- will end up at Richmond High School.

Assistant Principal Kibby Kleiman is in charge of discipline at Richmond High School. Historically, the school had high rates of suspension, expulsion and dropout. Suspensions were common for things as minor as being tardy to class. Worried that these punishments were keeping too many kids out of the classroom, Richmond High made a plan to reduce those numbers.

“In the past if two kids squared off and one pushed the other in the classroom, ordinarily we’d say 'Okay. Physical force.' A fight is supposed to be an automatic five day suspension. We absolutely would have sent the students home,” said Kleiman. Now, Kleiman says those same students would stay in school, talk through the problem and agree on a solution. “Now what we do is put that back in the hands of teachers and say to teachers, ‘You are the first step. What do you want to do to adjudicate this?’” he said.

“Putting an emphasis on Restorative Justice and prevention programs only on one hand, is no more appropriate than putting all your emphasis on security, emergency preparedness on the other hand,” said Trump.

Trump says "zero tolerance" policies have gotten a bad name because of high profile cases where administrators lacked common sense. Many of these stories make the news -- such as cases of five-year olds being suspended from school or even arrested for things as minor as swearing. Trump says that's not the norm, and administrators are responsible for evaluating real risk -- like kids bringing guns to school.

"Most school administrators don’t wake up in the morning, go to work, throw a dart at a dartboard with a bunch of students’ names and say, 'I’m going to ruin that student’s life,'" he added.

Nonetheless administrators at Richmond High feel their new flexibility will help them. Physical safety issues are still dealt with by staff, but for lesser offenses the school has adopted a program called Youth Court. Peers listen to both sides and come up with consequences other than suspension.

On a Thursday afternoon, the Richmond High’s Youth Court is in full swing. Student defense attorney Nestor Guzman makes an opening statement about his client, a tenth grader, who was caught leaving campus during school.

“We have been gathered here today to discuss the case against my client. He has admitted that leaving school campus was wrong and is willing to receive Saturday school,” he told the makeshift courtroom.

After a presentation by the student's defense advocate Nestor Guzman and a student prosecutor, the jury, comprised of six seniors, comes to a decision: the student has to write an apology letter to the school counselor, attend tutoring, and serve on the jury for the next youth court case -- a welcome alternative to a suspension for a student who had already racked up 43 absences this school year.

Since Richmond, California schools adopted Youth Court and other new approaches to discipline, fewer kids have been suspended. Since 2005, the district has cut suspensions in half.