Search for advice on how to repay debt faster, and you'll most likely find tips that include things like "reduce your living expenses so more of your money can go toward paying down your debt." That's not bad advice. If you can find a way to eliminate the need to pay rent, you can free up a big chunk of change to put toward paying off your debt instead. But living rent-free just isn't a reality for most people. And between rent payments and all the other bills you need to pay in a month, there may not be much left to devote toward your goal of debt freedom. 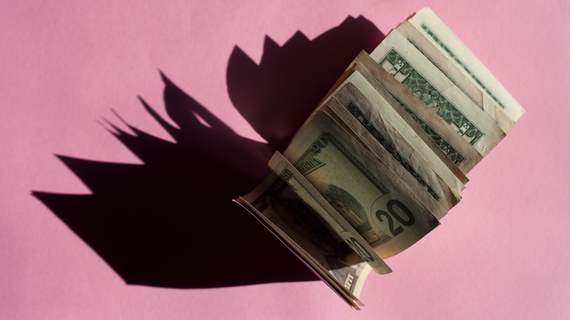 Iryna Hlushakova knows how much work it takes to manage multiple financial responsibilities while also paying off multiple debts. After a relationship with a significant other dissolved, she wanted to repay her ex-boyfriend the money he contributed to their apartment and her car. She also worked to pay off several thousand dollars on her credit card and two personal loans. All her debts amounted to well over $20,000.

She repaid them all while renting and financially supporting a family member. Here, she shares her story and experiences, along with tips that worked for her and the advice she has for others who are struggling to pay off debt while renting.

Find inspiration to keep you motivated

"Being a first-generation immigrant with my mom relying on me to send money home every month, I knew I could not maintain my sanity with this debt," Hlushakova explained. She owed her ex-boyfriend money he put down on an apartment in Boston, MA, and money he gave her to help her buy a car. She owed $8,000 on a personal loan and $11,728 on another, with her car as collateral. Several thousand dollars sat on her credit cards.

Hlushakova worked to repay all her various debts over a period of about eight years, from 2007 to 2015. During that time, she lived in a one-bedroom apartment by herself until her sister moved in with her to help with rent. Her sister also helped with smaller things that contributed to savings, like cooking and preparing meals and snacks instead of buying food on the go.

"I had nobody to count on for help and had no other option but to succeed. If I didn't, I couldn't help my sick mother," says Hlushakova. She was dedicated to making every dollar of her income count to reach her goals. She also was inspired to stick to her plan by asking herself, "What financial decisions would 'future Iryna' be grateful for?"

Create a plan and take the right actions

So how did she take action and get to work? Hlushakova first evaluated her spending and divided everything into two categories: necessities and everything else. "Necessities stayed: electric and phone bills, rent, loan payments, gas, groceries," she says. But she started cutting back on wants and discretionary purchases.

She decided that if she wanted to pay off all her debt, she couldn't afford things like eating meals out or paying for cable. "Every dollar had a purpose," she says. As she got better at focusing on paying off all her debt, she realized she didn't miss a lot of her previous expenses. "This became a game," she explains. "How can I find this cheaper, what other options are there?"

Hlushakova did, however, maintain a few nonessentials in her budget. She says sticking to a long-term goal that requires a long-term plan and taking action over time requires a little wiggle room. When you're constantly worried about money, she explains, you need an outlet to release that stress and anxiety. She continued to pay for an inexpensive membership at a climbing gym, because she valued her time to work out. "Climbing completely refocuses you on being in the moment, and it's a very meditative experience," she says.

Deal with mistakes and move on

Hlushakova admits she made money mistakes while she worked to pay off all her loans, credit card debt, and what she owed her ex-boyfriend. "The biggest mistake I made was buying that BMW, when in reality, I could not afford it," she says. The cost of ownership took a huge financial toll on her. Not only did she need to repay her boyfriend for his help in purchasing the car, but also she needed to pay off the personal loan she got by using the car as collateral.

"It was so important to me to appear successful in the eyes of others," she says -- so much so that she risked financial stability to keep up that appearance. But her experiences in repaying the money she owed helped her better understand what she actually valued: her ability to financially care for herself and not rely on others.

By 2015, Hlushakova sold the BMW; she now commutes to work on her bike or simply walks. She readily says buying a luxury car while she was already in debt was a mistake, but she has learned from it. "Don't let others define some of the biggest purchases in your life," she advises. "If you cannot afford whatever it is outright, maybe it is not the best solution at the moment."

How you can pay off debt while renting

Hlushakova is debt-free today and still motivated to continue improving her financial situation. She believes in the power of what she playfully calls an "F-you fund," or a savings account she can use to cover emergency expenses without relying on someone else to survive. "You don't have to make yourself vulnerable by carrying your debt with you," she says. "It can be overwhelming to start, or even unclear where to start. Empower yourself by making the small daily choices that will make you happy later."

Hlushakova has a lot of specific advice for other renters who struggle to repay debt while also devoting a slice of their income to the monthly rent. She tries to make small choices that add up to big savings over time, like avoiding paying for a cellphone with a major carrier.

"Using [a mobile virtual network operator] saves me over $80 per month on a cellphone plan, with the same quality of data, messaging, and calls," she explains. "That $80 per month translates to $960 annually. The power of these small choices is incredible: The compound interest over 10 years on saving on just a cellphone plan will allow you to buy a car."

She also says she understands that it feels good to buy the newest technology or the trendiest clothes to keep up with everyone else, but says buying these kinds of items jeopardizes your financial freedom. These material things can get old so fast, and the cost of replacing them with ever-newer things eats into the money you could use for debt repayment or savings.

"I believe in the power of living in America," says Hlushakova. "You always have options, even if it doesn't seem like it on the surface. Maybe this is the true American dream: not buying every single thing that comes to your mind, but rather liberating yourself from debt and finding manageable options to building your own independent life."

She doesn't hesitate to say that she would rather take a bad day in the United States over anywhere else in the world, and she believes it's possible to create your own solution to your financial problems. And Hlushakova is the embodiment of the hardworking woman dedicated to building a better life.

"If you can help it, don't spend time dwelling on how bad it is," she says. "Think how you can take one step every single day to get you closer to your goal."

Have you paid off a large debt while still paying monthly rent? Share your tips for how to pay off debt while renting in the comments!