"In refusing foreign assistance for almost two months, we rejected ships with ten times the capability of the vessels we used instead. Quietly, on June 18, the Federal On-Scene Coordinator (FOSC) finally agreed that we need help, admitting that the USA has "an insufficient number of specialized oil skimming vessels." By their delay, our bureaucracy and government regulation made a horrible situation even worse. Who knows how many livelihoods--and how much of the environment--would have been spared if our government had not drug its bureaucratic feet?"

Our own government has quietly admitted that America needs foreign help to handle the oil spill--almost two months after pushing that help away.

Far more oil could have been intercepted before it fouled the Gulf Coast. So why hasn't our government apologized?

By refusing foreign assistance, we banned both the latest technology and cleanup vessels that far exceed the capacity of America's oil spill response vessels (OSRV's). We rejected ships with ten times the capability of the vessels we used instead.

In a quiet announcement on June 18, the Federal On-Scene Coordinator (FOSC) finally agreed that we need help, describing a conclusion reached two days before:

". . . the FOSC, in coordination with other federal agencies, determined on June 16, 2010, pursuant to 46 U.S.C. §55113, that there are an insufficient number of specialized oil skimming vessels in the U.S. to keep pace with the unprecedented levels of oil discharges in the Gulf of Mexico. Based upon this determination, foreign specialized skimming vessels may be deployed to response operations."

Technically, the Jones Act remains un-waived and continues to restrict use of foreign vessels other than OSRV's. Officials invoked only a limited exemption that was put into law after Hurricane Katrina.

By their delay, our bureaucracy and government regulation have made a horrible situation even worse. There were two weeks between the April 20 explosion on the Deepwater Horizon and the time when the first oil made landfall. And it was almost six additional weeks before specialized equipment from overseas was approved by our government for limited use.

The Dutch formally offered help on April 25. Not until June 14th did the U.S. State Department announce that some foreign help would be welcomed from the 17 nations who had been trying to assist.

We violated a basic rule of oil spills: "The key to avoiding catastrophic damage and extreme liability is a fast response."
So what's different about the foreign equipment that at long last is being deployed? Capacity, for one. They can do far more and do it more quickly.

The largest American OSRV I've found has only a 4,000 barrel capacity. Compare that to Norway's new cleanup standards, which state, "An active effort must always be made to achieve the largest possible tank capacity. Under no circumstances must the tank capacity for storage of recovered oil be less than 1 500 m³." 1,500 cubic meters is 9,400 barrels. None of our U.S. oil recovery vessels appear to come even close to this standard.

The European Union maintains a multi-faceted inventory of OSRV's. The Netherlands alone lists 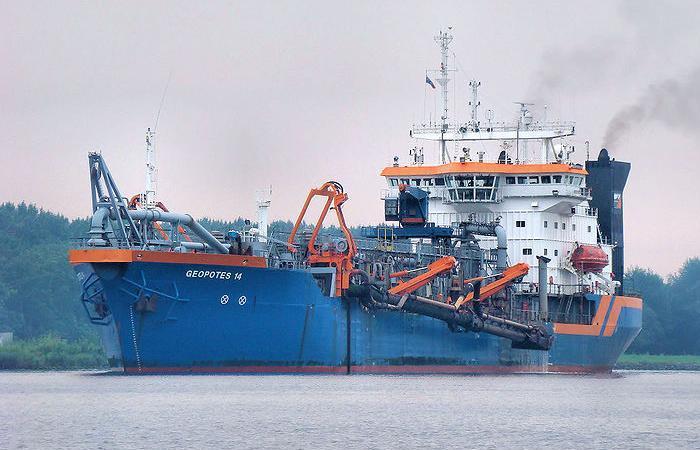 eleven ships that exceed this 9,400-barrel capacity, including vessels like the Geopotes 14 (pictured) that reportedly can pick up and contain 47,000 barrels at a time. That's ten times larger than any U.S. ship we've been using.

There's another problem with how U.S. regulations are slowing down the cleanup. The Dutch are now providing skimmers that can be attached to American vessels. But because most of what's skimmed is unavoidably water, not oil, they complain that America's EPA standards won't let them put back the water. Thus their tanks fill up with a mixture that is mostly water.

That mix is a serious problem. The Incident Commander, Coast Guard Admiral Thad Allen, told the media on June 11, "We have skimmed, to date, about 18 million gallons of oily water--the oil has to be decanted from that [and] our yield is usually somewhere around 10 or 15 percent on that."

That means 85 to 90% of what is collected is water, not oil. If complaints are correct, then unless vessels can separate these at-sea and discharge the water, most of what they haul back to a storage facility is water. That means six or seven trips to carry one full load of skimmed oil. Complaints are that our EPA says discharged water from the skimming cannot exceed 15 ppm (parts per million) of oil.

"The Americans don't have spill response vessels with skimmers because their environment regulations do not allow it. With the Dutch method seawater is sucked up with the oil by the skimmer. The oil is stored in the tanker and the superfluous water is pumped overboard. But the water does contain some oil residue, and that is too much according to U.S. environment regulations.

"Wierd Koops [head of the Dutch consortium, Spill Response Group Holland] thinks the U.S. approach is nonsense, because otherwise you would have to store the surplus seawater in the tanks as well.

"[Says Koops], "We say no, you have to get as much oil as possible into the storage tanks and as little water as possible. So we pump the water, which contains drops of oil, back overboard."

"U.S. regulations are contradictory, Mr. Koops stresses. Pumping water back into the sea with oil residue is not allowed."

He is not alone in criticizing America's restrictions on the cleanup efforts. Several Democrats in Congress have joined the calls to get our bureaucracy out of the way. Rep. Corinne Brown (D, FL) said at a hearing, "We are in emergency mode; we need skimmers. . . . There are small boats, I guess, but we need the big ones. I understand they are available in other countries."

We indeed need the big cleanup ships that America must get from overseas. Who knows how many livelihoods--and how much of the environment--would have been spared if our government had not drug its bureaucratic feet and invited them two months ago?

BP has apologized. And still must be held accountable. But where's the apology from our government--and the accountability?

Ernest Istook, former U.S. Congressman from Oklahoma, is a distinguished fellow at The Heritage Foundation. First appeared in shorter form at The Foundry.
.