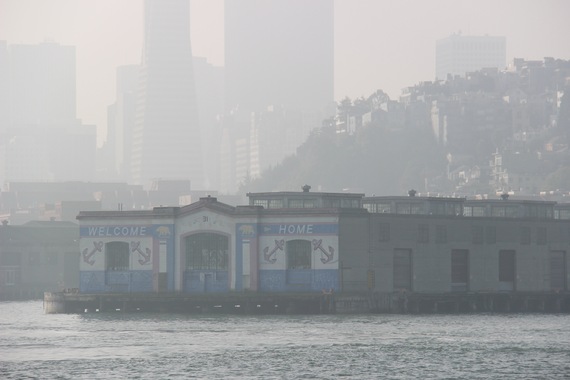 Welcome home. It's a simple phrase, but one that holds a lot of weight, especially in the wake of everything that has happened over the past 2 weeks. Some people don't get to go home, so it's our job to welcome them into ours.

I know I said I would discuss college alcohol consumption for my next post. I even wrote up a draft, but as I was sitting on it, making revisions and such, Missouri happened. Paris happened. Beirut happened. All of a sudden, my view on drinking culture that I have been dying to talk about was something that could wait. And so, here I am, writing about how it seems that the tragedies of the world seem to unite us for a brief, sad moment of history, only to further tear us apart on account of indestructible divisions composed of uncompromising racial, political, and religious views.

What better of a way to start the conversation by referring to the man upstairs, the King of Capitol Hill, the POTUS: Barrack Obama, himself. I recently saw a video of him speaking to an assembly of young students, and he said something quite striking.

On the topic of institutions of higher education, he uses one particular word to describe the majority of the audience: "coddled." (Skip to 3:37 to see this specific part, but I recommend watching the video in its entirety.) He goes on to explain that we (college kids) do not learn by shutting out and disrespecting those who differ in opinion, whether that be religious, political, or otherwise. He frowns upon the condescension with which we are so used to treating our opposition. He essentially reminded me why I chose USC in the first place. And he was so right about it all, I wish I could have been a part of that conversation.

You can't say anything anymore without offending somebody. On my first day of college class, I told a girl I had just met that she seemed "artsy." I'm sure we've all used that word before to describe someone due to his/her talent--or perceived talent, in my case--in the field of art. She said she was here studying film, and her fashion sense just oozed creativity. So I told her...and then she got offended. Her friendly disposition turned sour with a rebellious lip curl and she spat back, "What does that even mean? I don't get that. People tell me that all the time, and I don't understand why they say that. Like what makes me 'artsy?'" I struggled for words. Never did I think I would encounter such a venomous response to calling someone "artsy."

But it happened, and things like that happen all the time. The problem is that we have become so overly sensitive to the connotations behind words in an effort to be "politically correct." The truth is, if that's the end goal, then we might as well sew everyone's mouths shut right now, or even better yet, destroy language. Now we're just getting into absurdities. The point is, words only have as much power as we choose to give them. Tyler the Creator, a brilliant artist in the hip-hop genre, has known this from the beginning of his career. Two years ago in an interview with talk-show host Arsenio Hall, Tyler describes why words are only as offensive as we perceive them to be; it is not until we are entirely comfortable as our own beings that we can choose to take the negative meanings away entirely.

It sounds odd, but communication scholars will back him up. We often think of life as what we see and think and hear, but what does it all mean without words? We construct our social reality with language, and language in turn creates its own reality. It's up to us to limit the power that words are beginning to have over us, and I believe this is crucial to solving the underlying problems between diverse religions. This has the potential to do more than just diffuse the ticking time-bomb of the modern day religious wars. This has the potential to revolutionize how we perceive ourselves in an overly politicized world, something that would do boundless good for the progression of society.

And so, in the aftermath of the riots and the massacres, my brief hope for the unity initially shown turned to sadness and despair when it became a scramble for the spotlight of media coverage. I watched as Facebook, Instagram, and even Yik-Yak became battlegrounds for malicious opinions. I watched as society's painful convulsions spat out hatred, disrespect, and attempted solutions that only heightened the tensions. Then I took to writing, hoping I could try and make sense of this madness, and all I can say is...welcome home.