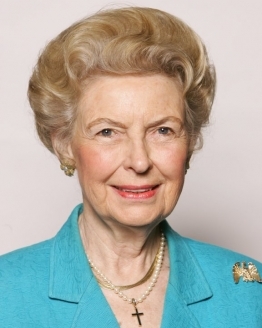 Hearing the news that Phyllis Schlafly has passed away at the age of 92 brings up a bizarre memory that is burned into my brain. When I was in college, I was a member of a student committee that brought speakers to our University for presentations and debates. It was our job to book, promote and then host them on campus.

We were hosting a reenactment of the Roe V. Wade debate between Sarah Weddington, the actual attorney famous for representing "Jane Roe" in the landmark case before the United States Supreme Court at the ripe old age of 26 and Phyllis Schlafly. I wanted to be Sarah Weddington's escort so badly and I did everything I possibly could in order to be assigned to her. But as a music major, I had an orchestra concert that I couldn't get out of during the time she wanted to eat dinner.

That left me stuck with Phyllis Schlafly, who charmingly once said, "Sex education classes are like in-home sales parties for abortions." The day they arrived, we had to greet them (separately), check them into their hotel (separately) and take them to dinner before the debate (separately). They had very strict orders that they were not to see each other at all until they faced each other on stage in debate.

The first thing Phyllis Schlafly said to me was, "Where is Sarah staying? Is her hotel nicer than the one I'm staying in?" I assured her they were hotels of equal quality, but she asked again, this time wanting to know the name of the hotel where Ms. Weddington was staying. I told her and she crossed her arms with an angry, "harumpf."

We began a stilted conversation at the table: it was like talking to your grumpiest, meanest, great-Aunt at a funeral. She didn't try to be warm, she was very abrasive to me, the restaurant staff, anyone she came in contact with and she didn't give a damn.

She looked me over, up and down, as we sat at the table. "So, are you a radicalfeministlesbian?"

"Pardon me?" I asked, leaning forward so I could hear better.

She said it again, louder and angrier, but all I could hear was some weird, German-sounding word that I couldn't quite make out. After about the third time of her saying "radicalfeministlesbian" did I finally figure it out. I was dumbfounded and started acting and speaking like Hugh Grant staring in a romantic comedy that has gone horribly, horribly wrong.

"Well, are you in a sorority?" She thundered.

"Huh, no sorority, but studying music is nice. Well, do you have a boyfriend? How do I know you're not a radicalfeministlesbian?"

The waitress saved me by coming to take our order. Listening to her speak down to the waitress was shocking. As the waitress walked away, she said, "I'll bet she's a radicalfeministlesbian." Even my bumbling Hugh Grant persona was speechless at this point.

I had a long list of questions I wanted to ask her, so I took a deep breath and started right in. "Mrs. Schlafly, you have created and built up a most impressive career. You are one of the most well known women involved in politics. You travel the country giving speeches and holding debates, you're interviewed constantly in every form of media," I began. She was preening. "However, you've built this impressive career on the platform of telling women that they should stay home and raise children and not have a career or work outside the home. Can you explain that contradiction?"

"Of course I can. It's simply not true. I never, ever worked outside of the home when my children were young. I only had my career when they were full grown." Satisfied, she tore into the breadbasket.

"Well, that's not exactly true," I countered. "For instance, you ran for your first congressional seat at the age of 28, when you were just starting your family. You published your most famous book, "A Choice, Not An Echo" the same year your sixth and youngest child was born. You did both-- you had a family and a career--so why are you telling other women not to do what you yourself did?"

Now she was pissed. "That's just angry, radicalfeministlesbians saying that. I was there for my husband as a good wife and I stayed home, where a woman belongs. Only after they were raised did I do anything outside of the home," she hissed.

Our salads arrived and she seemed to calm down. She was bald-faced lying to me about her career and I wanted to go at it again. The waitress put my salad in front of me and I took a bite while thinking about my next move. Ugh, disgusting, it was bleu cheese dressing, which to me tastes like an upper respiratory infection. I was about to say something to our waitress who was still standing nearby, when Phyllis let out a loud, put-upon, exasperated sigh.

"This salad has ranch dressing on it. I specifically asked for bleu cheese. Where is my bleu cheese dressing?" She waved her fork at the waitress. The poor thing stammered, "I brought you bleu cheese, I know I did!"

I've always been pretty confident and self-assured, even as an undergrad. But Phyllis Schlafly...she scared the crap out of me. She was fire-breathing-dragon-mean, but dressed up to look like a sweet Grandma. Maybe that's what was so confusing? She was like the living embodiment of a Grimm's Fairytale.

Phyllis and the waitress looked at me. I swallowed the disgusting bleu cheese salad and shook my head, fighting off my gag reflex. "Nope. This is ranch, just what I ordered," I said, spearing and eating a bleu cheese covered cucumber to prove my point.

"Are you sure," said Phyllis Schlafly, leaning over the table and staring at my salad and then at me, "that you don't have my bleu cheese salad? Are you sure?"

"I'm sure, Mrs. Schlafly. This is ranch." Now that I started lying, I couldn't stop. Apparently, this was the bleu-cheese-covered hill I chose to die on. Phyllis scolded the waitress some more and demanded a manager bring her out a salad covered in bleu cheese. Then she turned to me and said, "These radicalfeministlesbians. You just can't trust them."

I turned our conversation away from salad dressing and worked my nerve up to ask her more questions. "Mrs. Schlafly, you literally made a career out of trying to dismantle the Equal Rights Amendment. You worked to prevent other women from the right to work. You worked to prevent women from the right for equal pay. You actually worked outside the home while you were raising children, while telling other women to stay home and get out of the work force. How do you defend what it is you have done and are doing?"

Again, she shook her head and pointed her fork at me. "I did not hold a job. I volunteered. I was a housewife to my husband. I stayed at home and raised my six kids. I did not work outside the home until they were all grown." She was as adept a liar about her career as I was about my salad dressing: I had met my match.

What I wish I would've said to her then, what I realize now as a grown woman with professional ambitions, a career outside the home and four children that I am raising, is this: "Listen, you scary reptile. Maybe I am a radical, feminist lesbian. Does that make you happy to hear that? There is nothing wrong with being a radical, feminist lesbian. If I have to be a radical, feminist lesbian in order to have equal rights, equal pay, access to birth control and the same opportunities afforded to men, then by all means: I AM A RADICAL, FEMINIST LESBIAN! Oh, and also? It was me who ate your disgusting bleu cheese salad, so there."