Unless you've been living under a rock for the past week (and probably not even then,) you've heard about the insanity that is Pokemon Go. From computer nerds getting exercise for the first time in... ever, to hotels going out of their way to cater to players, there's a brand new uber-trend in town, that'll probably last about a month, max.

Like everyone else, I've gotten just as hooked on hunting those weird little creatures, and the past two nights while on a business trip in Los Angeles found me walking around downtown LA, searching and capturing, running into garbage cans and tripping off curbs with my head down, focused on this ridiculous game that's more addictive than anything in recent memory. 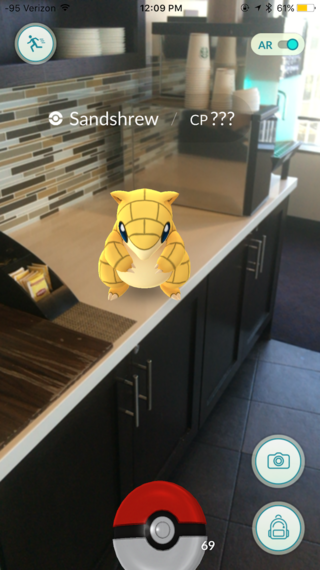 As I grabbed a Pikachu outside of the Sheraton Grand Hotel, I realized something -- Playing Pokemon go is exactly what it's like to have ADHD: 100% Completely distracted while 100% completely, absolutely focused. It's the perfect metaphor. We're staring at our phones, 100% hyper-focused on the screen in front of us, while still managing to process all our signals from the outside world, yet not doing anything we're supposed to be doing.

For those without ADHD, it's hard to understand what our lives our like. But Pokemon Go is a perfect metaphor for that. A million things happening on our screen at the same time, and we're perfectly in sync with that. Yet we're also vaguely aware that there's an outside world, with things like speeding trucks coming towards us, work or school deadlines, and even texts or emails coming in that we need to return. We know this, and we're processing it, but we're doing it while still being 100% hyper-focused on grabbing a Rhyhorn that just appeared in front of us.

To those without ADHD, I encourage you to give Pokemon Go a try -- to understand what we go through EVERY SINGLE DAY. Our gifts might make a little more sense to you, and how we handle them might, as well. That's us, 24/7/365, and yet we've managed to somehow turn that into a benefit, and in many cases, even a catalyst for our success.

If nothing else, put on your headphones, and listen to the music and sounds the game makes. Close your eyes, and imagine that being the soundtrack of our lives. It really is just like that for us, every single hour of every single day.

This article was originally published on Faster Than Normal, a blog and podcast about the gifts and benefits of having ADD and ADHD. FTN features weekly interviews with world leaders, celebrities, and business leaders, who not only admit to having ADHD, but embrace it as a gift, rather than shun it as a curse. Why not check out the podcast? Each episode is only 20 minutes, because, well, ADHD.