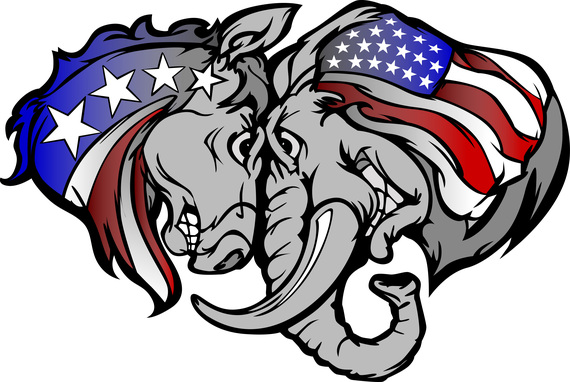 Turn on the news on any given day - but especially during an election - and you're likely to see and hear confrontation between Democrats and Republicans. News stories about stark disagreements in Congress, negative campaign ads, statements by politicians that sharply criticize the other party, and commentary by political pundits all point in one direction: there is little hope that the Democrats and Republicans can ever agree on anything. Moreover, not only do partisans disagree, but they are also very angry - mostly at each other.

What are the consequences of this cacophony of information about partisan disagreement?

One might suspect that the more people see and hear about partisan conflict, the more they cling to their own partisan side. Indeed, there is research in political science that demonstrates that Democrats and Republicans dislike each other more than they ever have in years past.

But our years of research, published this week in our new book, Independent Politics: How American Disdain for Parties Leads to Political Inaction, reveals a different, potentially more surprising consequence of negativity in politics: the rise of people who call themselves "political independents".

Over the past decade, the number of Americans who tell pollsters that they are "independent" - rather than Democrat or Republican - has been on the rise. According to Gallup polls, in 2015 an average of 42% of people called themselves independents. According to Pew, independents are higher in number than have been in 75 years of polling.

Our research draws a direct connection between the rise of independents and the onslaught of media coverage of partisan disagreement. News stories show that members of both political parties bicker, fight and, at times, prioritize their party ahead of constructive political progress. This is not a flattering portrait. To no surprise, many Americans do not want to associate themselves with a group that is viewed so negatively by others. As a result, they avoid the party and select the "independent" category.

What this means, as our research shows, is that people who call themselves "independent" may have consistent - even potentially strong - connections to a party. These "independents" are just too embarrassed to publicly admit their secret partisan ties.

In additional experiments, we found that people who read about disagreement between the Democrats and Republicans became less likely to identify themselves as strong partisans.

These studies point to a difficult relationship between media coverage and partisanship. People view the parties and partisans in a negative way. News stories that emphasize partisan disagreement deepen these negative views of partisans. This should not be surprising -- there is little positivity to draw from stories of anger, insurmountable disagreement and endless political bickering.

The problem for parties is not simply that people have negative views of them, but that people don't want to be associated with them - at least not in public. Decades of research in psychology and sociology suggest that many (if not most) people want to make good impressions on others. When asked to make a good impression, people in our experiments reported that they were independents. It is difficult to imagine people publicly supporting a party or its establishment candidates, when they don't believe that doing so will impress others.

Many independents, we suggest, have clear partisan views. In fact, most independents do prefer one party and they even vote for that same party election after election. They just don't want to admit that they are partisans to their friends, to their colleagues, or even to an anonymous survey. Instead, they rely on the label independent. And, given the endless attacks and bitter disputes that increasingly color our political landscape, it is difficult to blame someone for keeping their partisanship under wraps. No one wants to be the elephant (or the donkey) in the room.

Assistant Professor of Political Science at the University of Arizona