Something had to be done in Gaza. Something. Anything, really. So why not a Hail Mary?

Since the beginning of the second intifada in 2000, more than 8000 rockets and mortars have been fired into southern Israel from Gaza. And who could blame Jerusalem for trying to put an end to it? After all, as every single Israeli security expert reminds anyone proffering an alternative to F-16s, would any other country tolerate attacks on its civilian population with the patience and dexterity Israel has shown? What if Houston or Atlanta were being attacked like this?

Even Israel's President and 'elder statesman' Shimon Peres found himself wondering, what does Hamas hope to accomplish by constantly firing rockets? "What do they expect, that we won't respond?" And it's a great question, but it's also painfully simplistic. This is not merely a matter of broad principle about patience in the face of incessant attack. There's a reason Israeli talking points this past week have focused almost exclusively on the big picture of the last seven years--because the last seven months have demonstrated a painfully inconvenient fact: whatever its demerits (and there are many), Hamas has discipline. Period.

Far more so than the PLO ever did, when Hamas pledges to reduce tensions, it does just that. One need not believe that the group's leadership is virtuous or courageous simply to admit that their ranks follow orders. In the months that followed the June 19 "lull" (tahadiya) in fighting between Israel and Hamas, the number of rocket and mortar attacks plummeted and stayed down for nearly five months--creating the very climate that the IDF now claims to seek with Operation Cast Lead.

If Hamas had no discipline, this argument wouldn't fly and a Hail Mary like Cast Lead might be strategically worthwhile, but the best case scenario by any metric is a long-term version of the lull that put Israelis at great danger only after Israel launched an attack on Gaza on November 4th, effectively ending Hamas' restraint.

While the explicit goal of this latest operation is to cease all rocket and mortar attacks on southern Israel, senior IDF and intelligence officials have privately signaled in a disparate chorus that this goal is unrealistic anyway, even with a ground invasion. Israelis couldn't even prevent rocket/mortar fire when they occupied Gaza before 2005, and back then Hamas was plagued by Fatah's rivalry and amateur rocket technology.

'But nevermind that,' Jerusalem insists. 'Details will only confuse you. Would you or would you not just sit by and do nothing in response to rocket fire on your homes?' Apparently, it's that simple. It's irrelevant that Israel was benefitting tremendously from the lull and the near-deafening silence (.pdf) it produced in the southern Negev desert. 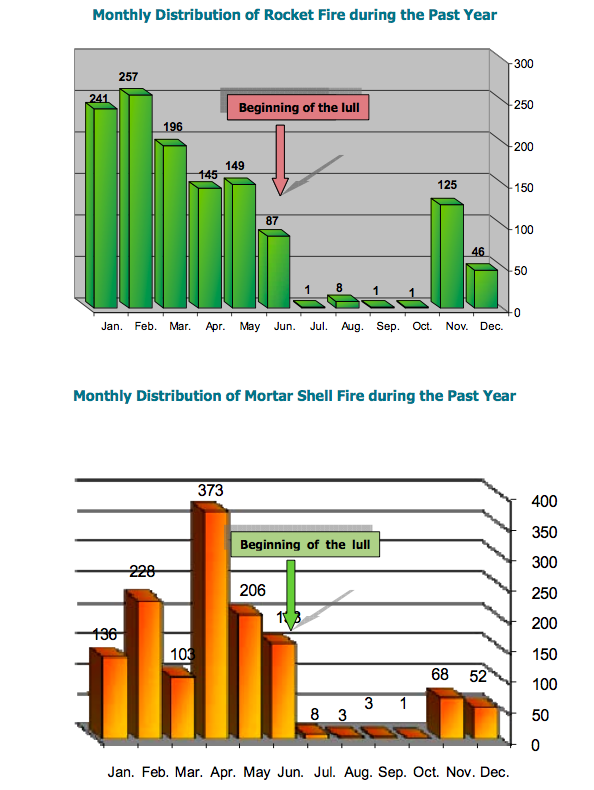 Rocket fire alone was reduced from a monthly average of 179 to less than 3--with the remainder attacks being attributed (according to Israeli intelligence) to Palestinian Islamic Jihad, no less.

Yet like any country, when Israel launches a military operation, especially a controversial one, the public relations and propaganda offensives rely on any and every rhetorical ploy to garner support, even when Israeli security officials are privately saying--usually "on background"--that the southern Negev will not be completely calm until Hamas wants it to be completely calm, and the closest Israel has ever come to that was during the above lull.

Here's another example. During previous lulls or ceasefires between Israel and Palestinian militants, it's always remarkable to listen to Israelis decry their enemies for "exploiting" the ceasefires to dig in and prepare for the next battle, as though Israelis spend that same time on holiday, hoping for the best. In fact, in the past week, the Israeli press has reported on the abundance of self-congratulation in Jerusalem over how much intelligence had been gathered for this operation, how many stockpiles and weapons caches had been tracked (and subsequently targeted), and how much disinformation it had spread to confuse the enemy.

So it seems that when Israelis plan for the worst, it's because they're competent warriors who scorn the unprepared, but when Palestinians plan for the worst, it's because they're drooling for martyrdom. (Rest assured, some certainly are.) And it was this apparent drool that prompted Israel to terminate its obligation to the lull on November 4th by attacking Hamas' tunnels burrowing beneath Gaza towards Israel. (It was through a cross-border tunnel like this one that Hamas captured IDF soldier Gilad Shalit in the summer of 2006. So understandably, it's a soft spot.)

For perspective, it is normal for Hamas to dig such tunnels, and equally normal for Israel to destroy them, though in a lull--and for a tunnel that had not reached Israeli soil yet--the killing of six Hamas militants in the operation doesn't quite compute. If preparing for the next big fight is considered a violation of the lull, then it is endlessly ironic that Israel's surveillance of Hamas' tunneling was itself just as preparatory as the tunneling itself--like an indignant student insisting his classmate was cheating, and citing as visual proof, "Because I was cheating off of him too." Woops.

But here's where strategy becomes dangerously indistinguishable from propaganda. Israel has every right to defend itself; it has done so superbly and honorably on many occasions. It can prevent every attempt by Hamas to develop weapons and tunnels, as it did on November 4th. It can even feign surprised outrage whenever Hamas retaliates, as any competent foreign ministry would in the days before a powerful military operation. Perhaps Barak thought he was playing the old time-in/time-out game, but one IDF official even tried to tell the NY Times that because this was a "pinpoint" operation aimed at a specific "imminent" threat, the op shouldn't be considered a truce-breaker, and Israel remained committed to the truce. Water under the bridge, right?

But the same common sense that compelled Shimon Peres to wonder about Hamas' expectations surely compels Israel to consider if Jerusalem's own attacks could actually go unanswered. Naturally, that thought process is utterly absent in the foreign ministry's outreach of outrage because their goal is to recruit as much support as possible. And to that end, the MFA seems to be playing with graphs on its website in order to paint the lull as worthless.

But more ominously, while propaganda usually serves as a tool to support a nuanced and methodical military operation, Cast Lead seems to have been launched by a simplistic caricature of Israeli self-defense itself, blossoming in the foreign ministry's press releases. Talking points are being confused with chokepoints, and with a caricature calling the shots, it's no wonder that what seems to pass for "strategy" is actually just a target list mixed with a little cloak and dagger.

Instead of talking about whether the smuggler's paradise beneath the 9-mile Egypt-Gaza border could be countered without (or even with) a long-term Israeli occupation, Jerusalem is talking about the need to "retrieve the power of deterrence" and to teach Hamas a "lesson." Yes, we heard you the first ten times. But what is your plan? What will prevent Hamas from re-arming once you deftly destroy all of its arms depots? An "international force"? A moat or underground wall along the Egypt-Gaza border? Or perhaps a giant trench-digger to excavate the tunnels. Have you thought that far ahead? A 500+ body count in Gaza and a 300% increase in attacks on southern Israel better have a silver lining.

Either way, in its public justification for the operation, by focusing so much on the last seven years (and not the lessons of the last seven months), Jerusalem indicated that raw principle was all it dared to employ in determining the appropriate strategy for Gaza. Right when Olmert and Barak needed to sift through the fine print--which demonstrated that Hamas, as evil and wicked as it is, has discipline--it longed for neat and simple principles that begged equally blunt instruments. After all, 'something' had to be done. Something that matched our fury, something that vindicated our failures in Lebanon, something that deterred our enemies, something that taught them a lesson, and something that didn't make us feel suckered and alone.

These are completely understandable and justifiable feelings for Israelis to have, but the somethingness of Israel's resolve has hijacked its strategy. And the propaganda machine is not along for the ride, but revving at the wheel of a Merkava.