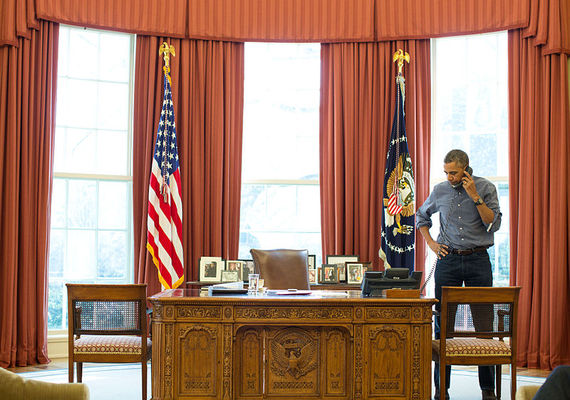 It's hardly their first priority with the threat of war looming, but Ukrainians will be paying a lot more for their heating oil next winter. Not only has Russian supplier Gazprom rescinded its wholesale discount to Ukraine, but the termination of consumer heating oil subsidies is a condition of the IMF loan negotiated by the new Ukrainian government to avoid bankruptcy. Russia will not only get its money back, but the IMF will be its collection agency. It's a rocky start for a fragile, westward-looking Ukraine.

We've seen this before. Like the proponents of a post-Assad Syria who hoped that Washington and Europe would help pay the bills, the new Ukrainian government will have to come to terms with the very different approaches of the U.S. and Russia to democratic reform movements in the aftermath of the Arab uprisings.

In both Syria and Ukraine, Washington has been unable to marshal the opposition into a structure capable of governing itself, let alone the country, while Moscow has shrewdly put its money where its mouth is, investing resources in military assets and security-seeking loyalists. In Syria, Russian President Putin backed the Assad government. In Ukraine, Putin has wielded the gas threat effectively to create wedges in international alliances.

Speaking last month in Brussels, President Obama urged political isolation for Russia, even suspending it from the G8, threatening that "if the Russian leadership stays on its current course, together we will ensure that this isolation deepens." Even as Obama rallied European public opinion, the Russian military continued to move heavy artillery throughout Crimea and troops around Ukraine's eastern regions. In response to the lackluster economic sanctions, Putin thumbed his nose by transferring his salary direct deposit into the Rossiya Bank, which was singled out for punishment. In a disturbing recent incident, a Russian warplane buzzed a U.S. naval vessel in the Black Sea.

The U.S.-backed popular revolutions that sought to turn Syria and Ukraine into neoliberal democracies suffer from two main obstacles: neoliberalism and democracy. Count on the neoliberal world order (in which debt, privatization, capital flows, austerity and deregulation rule) to nickel and dime its new members to death. Loans, austerity, conditional support, endless bureaucracy are what the U.S., EU, and IMF offer the new members.

This is why Arseniy Yatsenyuk's first words as interim Ukrainian prime minister were that he would be the most unpopular leader ever and that Ukraine was on the brink of hell. Even the bouquet of emergency aid loan packages assembled for Kiev is fraught with contradictions. A billion dollars in loan guarantees (bought dearly in return for the scuttling of IMF reform) is all the Obama administration could contribute to Ukraine's $35-50 billion black hole. A far cry from the Marshall Plan, or even the money squandered on the Iraq and Afghan debacles.

Like loan packages to stave off bankruptcy, democracy (both local and international) is messy. Washington has focused on the telegenic front end of revolutions -- the spectacle of popular demand of democratic values -- and been ineffective at following through. It provided some moral support to the mainstream moderates in Syria, then quickly reverted to a hands off policy, leaving opposition members to a Darwinian struggle in which the least sophisticated, most extreme of the Islamist rebels overwhelmed the moderates. The same thing could happen in Ukraine, as a motley assortment of comeback kids, oligarchs, sportsmen, bankers and anti-Semitic, anti-Russian gangs jostle for position in the new government. Whoever most efficiently channels popular energy (hope rapidly decaying into fear and anger) will dominate. Meanwhile, in both Syria and Ukraine, Putin manages constituencies of ancien regime loyalists who are united by fear of the west and who crave security and protection over liberal values.

On the international front, Russia's isolation depends on a united coalition of European Union and NATO signatories. But coalitions, too, are tricky. Russia's supply of roughly 30 percent of Europe's natural gas is the key wedge that prevents a more powerful U.S.-European response to the Crimean annexation. Germany will continue to put the brakes on sanctions that might harm its national interests. New NATO members in Eastern Europe and the Baltic region express their palpable fears that they may share Ukraine's fate. After all, Ukraine gave up its nuclear arsenal in 1994 in return for a guarantee of its "territorial integrity and political independence" by the U.S., the UK and Russia in the Budapest Agreement. The erosion of faith in Washington's pledge of protection further weakens Ukraine's hand.

In the Syrian civil war, divided and jumpy international partners have created chaos. The failure of the U.S. and Europe to effectively support the moderate political and military opposition resulted in governments and private parties in Saudi Arabia, Qatar and Turkey supplying weapons and funds to their chosen local allies, resulting in escalating extremism amongst the former revolutionaries.

Washington's approach in both Syria and Ukraine is hamstrung: shaky international coalitions, dubious local allies, tenuous overreach, and failure to defend even the reddest of lines are no match for Russian troop movements and "protection." Its partners are left vulnerable and exposed. Meanwhile, Russia's primary tactic involves offering unrefusable deals in return for territorial and political assets. While Ukraine got a gas price hike for its troubles, newly Russian Crimea might be rewarded with a state of the art undersea gas pipeline, compliments of Gazprom. As tension rises in Eastern Ukraine, Putin's strategy is steady, while Obama's is shaky at best.

Leila Hudson is Associate Director of the School of Middle Eastern and North African Studies at the University of Arizona and a Public Voices Fellow with The OpEd Project.