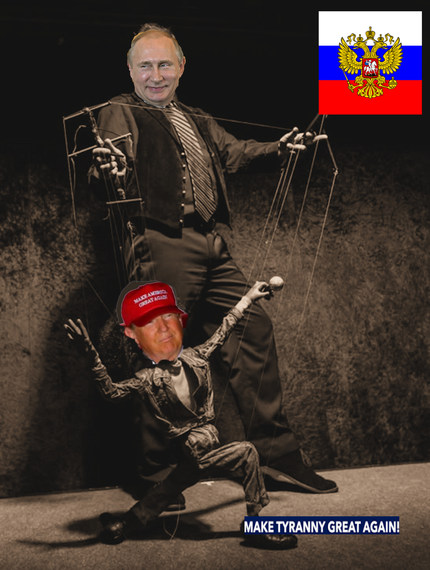 Why, in the midst of the growing indications that Russia hacked the Democratic National Committee and leading people in the Hillary Clinton campaign to influence the election to help make Donald Trump president, are Mr. Trump and his aides so adamant in their focus on rejecting the claim that the Russians also hacked the Republican National Committee and other Republicans?

The first and lesser reason is that the Russians not releasing Republican electronic communications while they were doing so with the Democrats' messages is further proof that their intent was to help to elect Donald Trump. Releasing any damaging private messages among Republicans would hurt Trump, and that, plainly, was not the objective of Vladimir Putin and his minions.

The far more significant reason--and one which virtually no one seems to be addressing--is what the Russians having hacked Republicans but not released what they found will almost certainly mean for their ability to control Trump as president. All President Putin's men will be in a position to threaten to release during a Trump Administration what they held back, for their own purposes, before the election, unless he does their bidding even more completely than he might otherwise do.

Now Mr. Trump has decided to postpone until January a news conference he said he would hold later this week. He had said that he would announce at the conference his detailed plan for how he would separate the presidency from his business interests. The gullible are saying that he must not yet have a plausible plan to do that and so has postponed the press conference. Isn't it far more likely that he just doesn't want to face questions from the media, which would undoubtedly include the Russian intervention in the election, until after the Electors vote on December 19?

Unless the media, leading politicians of both parties, and the American public insist on full disclosure before December 19 of the evidence gathered by the intelligence services on Russian actions to bring about Trump's election, we will find ourselves with a president put into office by Russia, with a very friendly attitude toward Vladimir Putin, a National Security Adviser close to Putin, a Secretary of State who was presented by Putin with the "Order of Friendship, one of the highest honors a foreigner may be awarded from Russia," and the potential to be blackmailed by the Russians because of hacked information they may have on him. It is a plot so fantastic that a publisher would have rejected it as unbelievable had it been floated by John le Carré.

Ronald Reagan completed the winning of the Cold War. Donald Trump as president would be very likely to transform that American victory into a Russian triumph.

Are Republicans prepared to live with that outcome? Those who aren't need immediately to join with concerned Democrats and hammer out a Compromise of 2016 that will create a National Unity Government without a Putin puppet in the Oval Office.