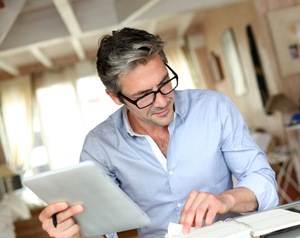 Recently, a study emerged suggesting that when we share content, we're apparently less likely to absorb the information we're sharing. It's part of a wider exploration into how digital content is changing how we think and behave.

A recent study explored whether consuming content digitally altered our ability to think logically or abstractly about that information.

The study was specifically testing what's known as our 'construal levels'. This is the level of concreteness versus abstractness used when we're trying to interpret information.

To test the lens through which we consume content, the authors published the same content (with same font size and format etc.) on digital and paper platforms, before then testing how readers had consumed the information.

Interestingly, participants scored much better on abstract reasoning after reading the paper versions of a piece of content than those in the digital group. This flipped on its head however, when people were asked more concrete questions.

This situation could be remedied if readers were primed to think abstractly prior to reading the text.

"There has been a great deal of research on how digital platforms might be affecting attention, distractibility and mindfulness, and these studies build on this work, by focusing on a relatively understudied construct," the authors say. "Given that psychologists have shown that construal levels can vastly impact outcomes such as self-esteem and goal pursuit, it's crucial to recognize the role that digitization of information might be having on this important aspect of cognition."

The study began after the authors had been involved in previous research that found that people tended to respond in a very localized way that ignored the bigger picture. It prompted the thought that digital devices are fundamentally influencing how we think, and even about what we think. This is especially so as digital devices are not only becoming ubiquitous in wider society, but more specifically in our schools and businesses.

A better understanding of how this might influence our thinking should go some way to enabling us to design and develop more suitable software to ensure we have the best chance to think the right way at the right time.