Bill C-246, the Modernizing Animal Protections Act, was recently introduced into Parliament. The act would prohibit shark finning, require textiles made from animals to be labelled, ban cat and dog fur, and clean up the animal cruelty provisions of the Criminal Code.

This bill is the latest in a string of attempts to update criminal cruelty provisions that are badly out of date.

The Criminal Code already prohibits causing animals to suffer unnecessarily, but it is so badly drafted, so convoluted and confusing, that it hardly encourages law enforcement to make use of its provisions. For example, the wording is unclear and the case law inconsistent as to whether a person has to intend to inflict suffering onto animals before the criminal provisions are triggered.

As a result, law enforcement bodies frequently default to filing cruelty charges under provincial animal protection laws, which are strict liability offences--meaning there's no mental element, and simply doing the prohibited act establishes the offence. While securing convictions is more straightforward, the laws are lesser in both penalties and social stigma.

Criminal animal cruelty prosecutions do happen, usually when the animal victims are cats and dogs. Michael Hill, who bound a dog's snout, neck, and legs with electrical tape and left him for dead, is serving a record two years behind bars for his vicious crime. Prosecutions like these show that the criminal cruelty provisions could work to protect animals. 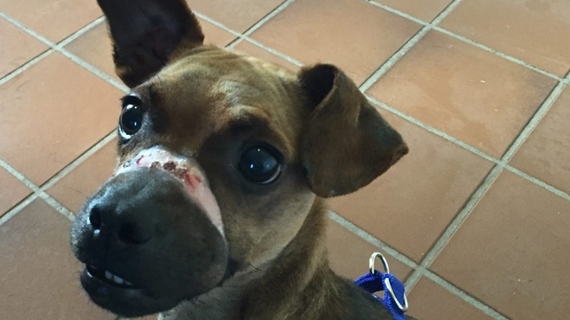 Justice the dog is now recovering.

Yet, a recent run of cruelty prosecutions reveal law enforcement's reticence to pursue criminal prosecutions when the victims aren't our beloved companions.

In 2014, a culture of unconscionable cruelty was documented at the world's largest turkey breeder, Hybrid Turkeys. As reported by the Toronto Star, the footage showed:

Workers punching, kicking and throwing turkeys. Their spines crushed and heads bashed in with metal rods and shovels. Turkeys with rotting eyes, festering infections and open wounds; one left to drag its exposed intestines across the dirty ground.

Despite the seriousness of the offences and the irrefutability of the video evidence, the company and some its workers were charged with 11 counts of provincial animal cruelty, pleading guilty to just one of them in exchange for the other ten being dropped, and paying out a mere $5,600 in fines.

Just last month, Chilliwack Cattle Sales and its employees were charged with 20 counts of provincial animal cruelty offences. Footage obtained by Mercy For Animals showed workers making a game of punching bulls in the testicles, punching a trapped cow in the face while screaming obscenities at her, and hosing down live pigeons to throw them around like baseballs. Although the investigating body recommended criminal charges be laid, prosecutors ultimately chose to file charges under two provincial statutes. That case is ongoing.

Most recently, footage obtained by PETA showed the owner of the notorious Bowmanville Zoo, Michael Hackenberger, maliciously and repeatedly whipping a restrained tiger. Hackenberger literally bragged on tape about his intention to inflict suffering onto the animal, providing a gift-wrapped package of evidence for a slam-dunk criminal cruelty prosecution.

These cases demonstrate that our criminal cruelty provisions aren't being used when they should be, rendering them nearly worthless. This worrying trend is creating a legally and morally indefensible two-tier system that ignores the plight of the vast majority of animals under human care in this country: animals used for commercial purposes, and most notably, farmed animals.

If we believe animals deserve to live free from suffering--all animals, not just the ones in our homes--we need to strongly denounce their neglect and abuse. Doing so will in turn deter it, helping shift societal norms and industry practices that allow it to flourish in the first place.

As a society, we are opposed to animal cruelty. Our criminal laws need to be brought up to date to be made consistent with our shared values.