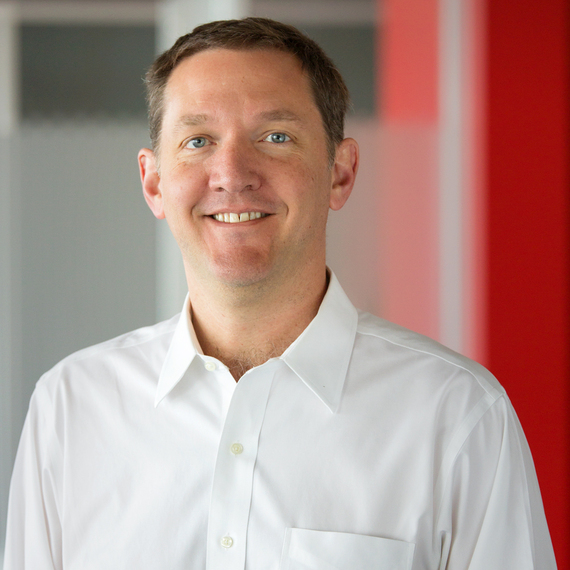 Many corporate cultures still conform to the hierarchical command and control management model designed for 20th century business needs. Knowledge workers are driving our economy today and they thrive in organizations that welcome their opinions, tap their creativity and award contribution over title.

In his new book The Open Organization (published by the Harvard Business Review Press), Red Hat's CEO Jim Whitehurst challenges businesses to adopt an open approach that ignites passion and performance. Red Hat became the world's first (and only so far) billion-dollar open source company by staying true to its ethos - leveraging a community approach to creating solutions where the best ideas win.

What is one of the biggest lessons you learned from writing The Open Organization?
Jim: Traditional management is analogous to classical microeconomics. It relies on oversimplified assumptions to make the math work. It assumes there is perfect information, that all parties are completely rational, and that markets are always in equilibrium. But the issue is, we know none of those things are true.

If you think about classic management theory, which developed around the same time, it makes the same fundamental simplifications: that people are rational and there's perfect information.

No wonder there's such a bifurcation between the literature and reality when it comes to management and leadership. Management is all about coordination with the assumption that people are rational. Leadership, on the other hand, is about recognizing that people are emotional beings and aren't always rational. People want more than just a paycheck; they want meaning and purpose.

How are you able to embrace openness and vulnerability?
Jim: First, I was given a gift of extremes. I went from being chief operating officer of Delta Air Lines, a classic, top-down, hierarchical structure, to CEO of Red Hat, a more inclusive, open organization.

Some may look at the way we organize at Red Hat and think it's absolute chaos. While in the beginning, I admit, it was hard to disagree, I ultimately realized that our chaotic culture allowed us to execute extremely well.

I've read a lot of management books. I've spoken to Gary Hamel, who wrote The Future of Management, on several occasions about the topic (he even wrote the foreword to my book). A well-regarded thought-leader in the management space, Hamel has long said a change was needed in the way we organize work. I believe what we have at Red Hat may be the very change he's been speaking of.

Second, my personality and skills fit really well with our open culture. I don't mind people telling me when I'm wrong or engaging in debate.

In my first month at Red Hat, we made several significant decisions, some I was not involved in. I recognized then that an organization allowed to see things in the market and respond quickly, without an order coming down the chain of command, has the ability to be extremely competitive. What's more, because people feel empowered to act, they're more engaged.

We don't experience change management problems the way other organizations do. While being open means including more people and weighing their feedback, all of which can take time, once we've made a decision at Red Hat, things happen quickly. I would say we spend more time in the decision-making process so that once decisions are made, execution is fast.

When traditional CEOs lament that "my organization is just unwilling to change" or "change is too hard," they sometimes overlook that the real reason change may be hard for them is they've allowed a few people in a boardroom to make a decision that they then expect thousands of people to agree with and implement without question. That's hard, even if the decision in question is a reasonable one. However, if you involve people upfront, once the decision is made, even if they don't like it, if they've had a chance to weigh in and get context, they're far more likely to accept and implement it.

It comes down to this, people want to feel heard. I wish more leaders and managers were willing to listen to and engage their people.

What advice do you have for leaders who struggle with being vulnerable?
Jim: I learned the importance of vulnerability during the bankruptcy restructuring at Delta. I remember being asked to speak to more than 200 night shift mechanics one evening, the same week we had announced the restructuring plan. The plan called for significant changes, including layoffs. I knew there was a good chance that some there that night would be losing their jobs. I started the meeting with an apology. I told them I was sorry, sorry that management had failed them. But, that we had come up with a plan to get the airline on track. I then walked them through the plan and took questions. Following that night, I was asked to give the same talk to teams throughout the organization. Engaging in that dialogue ended up helping the restructure go very well.

I showed vulnerability with that group of mechanics, and I'm sure many leaders and managers would find that uncomfortable to consider, much less do. But the truth is people have a large capacity to forgive.

We all have an amazing reservoir of forgiveness for people who we think are working to do the right thing, and whom we believe and find authentic. Being strong enough to say "I'm sorry" actually builds credibility. It doesn't show weakness, quite the opposite actually. Having the ability to say "I'm sorry" shows tremendous strength.

Unfortunately, a lot of leaders worry that if they say they don't know something or that they were wrong or that they're sorry, there will be problems to follow. However, I would challenge that thinking. I would say they would be amazed at how much people warm to them for being willing to be vulnerable, to be human.

A leader is someone who people follow. Yes, you can argue people follow them because of their position or because their paychecks are at stake. But true leadership is about getting people to follow you because they want to. And to do that, people need a compelling reason. So you need to determine why others should follow you. For me, it's about truly engaging and listening to people and being willing to say I'm sorry. Maybe that shows a degree of vulnerability, but that's the point from which I lead, and it's been very effective and rewarding for me.

What's one thing that you hope to inspire within people and organizations in terms of your book?
Jim: I hope the book challenges people to rethink their views of leadership. True leadership is about creating context in which your people can do their best, rather than telling someone what to do. It's not about control.

Most people want to do the right thing. If you have inspired people and created the right environment in terms of autonomy and accountability, the vast majority are going to do better than you can ever direct them. So get out of the way. You can't prescribe everything. The world's moving too fast.