The combination of increased longevity and declines in the coverage of defined benefit pension plans means that increasingly retirees risk running out of money because they live too long. Those who have significant equity in a home, however, can reduce or eliminate the risk if they use their equity wisely.

This article will compare three strategies that use a HECM reverse mortgage for that purpose. I will illustrate with the case of Mary Jones, who is now 62, owns a house worth $200,000 and no mortgage, and is worried about her ability to continue her life style past 82.

Given her age and house value, Jones can draw a credit line of $96,175 which can generate income at age 82 in either of two ways. One way is to wait a year (during which the line will grow to $101,138), and then purchase a longevity annuity from a life insurance company that will begin monthly payments at 82 and continue for life. (The reason for the delay is a HUD rule limiting draws against credit lines in the first year.) The available life annuity, obtained from www.immediateannuities.com, would be $2812 for a male, $2421 for a female.

As an alternative, Jones could sit on her credit line for 20 years, and then convert it to a monthly tenure payment that would continue so long as Jones resided in the house. During the 20 years, the credit line would grow at the mortgage rate plus the mortgage insurance premium of 1.25%. If rates stayed where they are today, the tenure payment in 20 years would be $2685, or about the same as the longevity payments. But if rates increased, the credit line growth would accelerate and with it the tenure payment that could be purchased with the line after 20 years. If the rate over the 20 years was 8%, for example, the available tenure payment would be $5738, or more than twice as large as the longevity annuity payment. 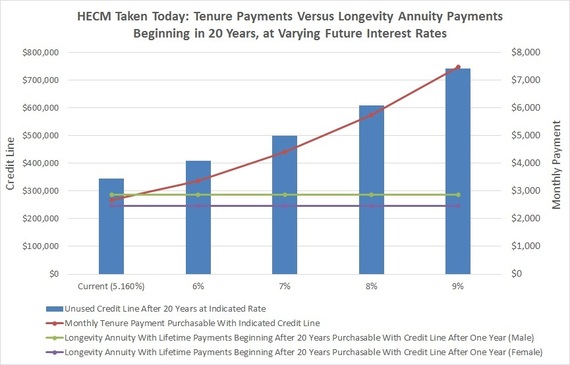 While higher interest rates in the future result in tenure payments larger than longevity annuities, Jones will also want to consider other important differences between them.

Life Versus Tenure: Annuities continue until death, which means that Jones could be in a nursing home indefinitely, yet continue to receive the annuity. In contrast, tenure payments cease after a year of non-occupancy.

Rigidity Versus Flexibility: Jones must transact the longevity annuity early, and cannot modify it in response to changes in her circumstances. In contrast, she can purchase the tenure payment at any time with the credit line available at that time. It might be in 5 years or perhaps in 25 years, depending on changes in her circumstances. She can even give up the idea of converting to a tenure payment altogether. The flexibility of a credit line is a double-edged sword, however, because it allows her to draw on the line to indulge passing impulses, to the possible neglect of her long-term goals.

Early Death: If Jones dies early, the annuity pays her nothing unless she purchased a death benefit, which would reduce the annuity payment. With a HECM, however, Jones' heirs would receive most of the equity in her house because credit line growth does not reduce the equity.

Security: the Federal government guarantees the HECM tenure annuity, whereas the life company annuity is only as good as the promise of the insurance company, loosely backed by state guarantee programs. Defaults on annuities, however, are extremely rare.

Bottom Line: For most seniors, the tenure payment dominates the longevity annuity because only tenure payments rise with future increases in interest rates, the cost of early death is much smaller, and the borrower can adjust to changing circumstances. The longevity annuity may be better for the borrower without the impulse control needed to avoid using the credit line for non-essentials.

A senior who may not need additional income for 20 years might decide to wait 20 years before taking out the HECM. The thought is that she will be older and her house will be worth more, so she should get a larger payment by waiting. But the logic is flawed. Waiting will almost certainly result in a smaller tenure payment.

The reason is that whether Jones takes the HECM now or waits 20 years, the payment she draws in year 20 will be based on her then-current age of 82, but if she draws the HECM now, she gets the benefit of 20 years of growth in the credit line. While house appreciation increases draw amounts for the borrower who waits to take out the HECM, the credit line for the borrower who takes out the HECM now is calculated on the assumption that her property will appreciate by 4% a year.

The numbers tell the story. Assuming interest rates remain at their current low levels for 20 years, if Jones takes the HECM now, her payment in 20 years will be $2685. If she waits 20 years to take the HECM, her payment then will be $2193 if her house appreciates 4% a year, $982 if it does not appreciate at all, and $3145 if appreciation is 8%. If interest rates average 7% over the 20 years, the payment on the HECM taken now would be $4402, which compares to $2582 on the HECM taken later with 8% appreciation. In short, for a delay to pay requires a combination of stable interest rates and rapid house appreciation.

Bottom Line: The best time to take out a HECM credit line is your 62nd birthday. Then take your time and think hard before you use it. 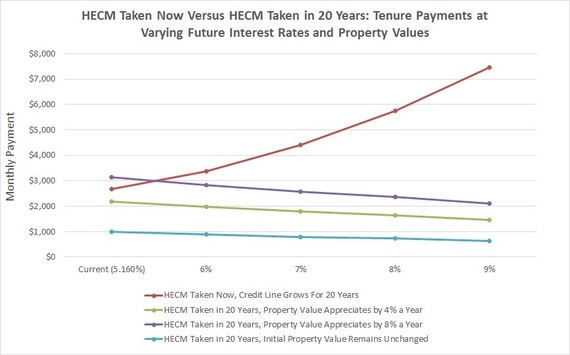 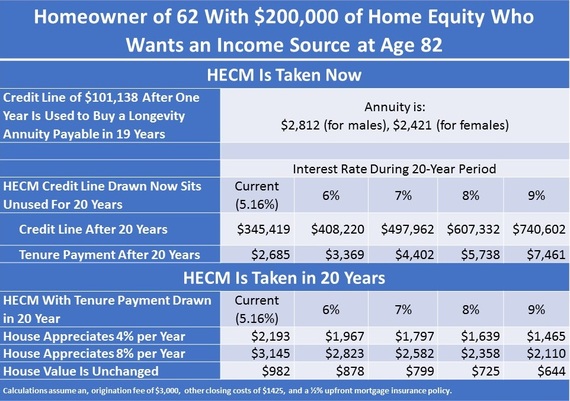