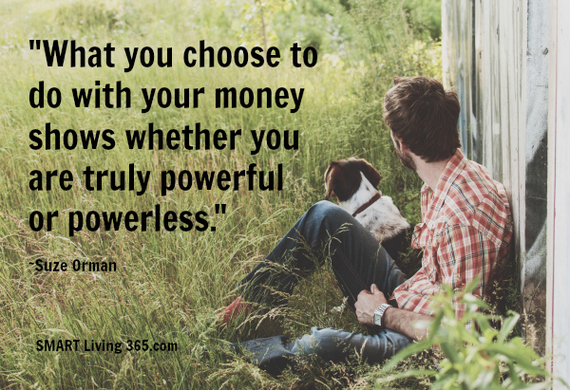 One of the stories I can vividly remember my father telling me years back was related to his pride at managing his money in retirement. At the time, both my father and mother lived on their social security and some modest savings held in a 401k. Dad frequently bragged that he lived better, traveled more, and seemed to have more fun than many of his friends who retired with big homes and generous pensions. From my perspective, at least at the time, their lifestyle seemed more humble and restricted than I felt necessary. Yet now, less than 20 years later, I recognize that their simple and minimal lifestyle afforded them tremendous benefits that millions of other "hope-to-be-retirees" could learn from--including myself.

A couple of weeks ago I read an article about how for some people, any kind of retirement may just be another form of magical thinking. On top of that a recent Google Consumer Survey done by gobankrates.com says that almost 50% of all baby boomers and those older have only $1,000 or less in savings. Naturally those thoughts led to even more questions. Is retiring well and happy even possible for the majority of us in the world? What about retiring early? Or will you and I be able to afford to take care of ourselves until the end?

Eventually, those questions led me back to what I've learned about minimalism and the many advantages of a more sustainable lifestyle, no matter what our age. A couple of years ago Thom and I started using the word "rightsizing" to describe the minimalist direction our life was taking. Many use the alternate word, downsizing to describe that action. But downsizing implies that you are sacrificing or giving up something better, for something worse. Rightsizing instead implies you are making a move that looks and feels "right." Big difference.

By the same token, I've also realized how valuable an example my father provided. Looking back he taught me three big things about the concept of rightsizing or simple living that I think would benefit most of us in our world today. Those three things are:

1) Live below your means. If you knew my dad you'd know that he would laugh to think that it was even necessary to share this tip. Dad always lived below his means even when mom or we four daughters were against it. Dad carefully budgeted all of the family's expenses, but most especially when they retired. Even after mom had several mini-strokes, developed Alzheimer's and would ask for certain extravagances, Dad firmly decided when money would be spent. From the outside, it may have seemed less than kind to my ailing mother. But due to my father's careful money management, they both were able to live comfortably in their own home for the remainder of their lives and never needed outside assistance, from us their children, or the government.

On the other hand, a friend of mine told of a very different story as her parents aged. Both her mom and dad had well-paying government jobs with generous pensions. When they retired they did nothing to alter their lifestyle. All was well until they aged and physically deteriorated. That's when they began spending the majority of every day on the Internet and QVC buying things for entertainment. Naturally they used their credit cards to make those purchases. Before long there was no money in the bank for anything. That's when their children had to step in, take away the credit cards, slowly begin paying off her parent's now considerable debts, and virtually support her parents for the remainder of their lives.

Living below your means might not sound like making the most of your life today--but it is resisting the urge to spend money you don't have, to buy things you probably don't need, to impress people who you don't even know. Worse yet, it is spending money to entertain yourself because you've forgotten what really matters and is most important to a happy life.

2) Your happiness has nothing to do with all your stuff. Again I can hear my father laughing at this one, but as simple as it sounds, I think we all know people (hopefully we aren't one of them) that end up buying more and more stuff, and then often just throwing it in the closet. I have a friend who recently lost her job and then her 5,000 square foot house. After moving to a much smaller home, she is now in the process of sorting through and selling what she can't even afford to store. Not only can you see how giving up that stuff is painful to her, but she still insists on telling you how expensive it was to buy and how much she still owns, as though her identity would disappear without it.

Of course, there is nothing wrong with buying stuff, especially stuff we need. But what happens is we start associating those "things" with our happiness and wellbeing. Then without them, we often don't know who we are or what matters to us. Believing that we need any material possession to give value to our lives is setting ourselves up for a fall. And even if we end up holding on to our stuff for as long as we live, chances are good that when we pass on, it will be sold cheaply at a yard sale, given away, or simply tossed in the trash. As a Joe Hearn, author of Intentional Retirement.com says when talking about settling an estate after people die, "I've never been to one that didn't involve a dumpster."

3) Trying to impress or keep up with others is a waste of time. My father was far from perfect but he never struggled with trying to impress others. I know he liked nice things (don't we all) but he vastly preferred the freedom and peace of mind of knowing he lived below his means. Up until the time he passed, he lived modestly in a free and clear home, drove a free and clear car, and had a bit of money in the bank. But what was far more important, he passed on with dozens of good, long time friends, and a family that loved him--and the knowing that he'd left the world a bit better by his life.

My husband Thom and I are not yet retired, but we do consider ourselves rightsized. Even better, because of our rightsizing we can comfortably retire whenever we choose. As I've written about in my newly released book, Rightsizing * The SMART Living Guide to Reinventing Retirement, rightsizing is taking the time to focus in on what is most important to you and then eliminating everything else. Our journey to rightsizing led us to sell our big home and move to one that fits just the two of us perfectly. We also got rid of stuff that didn't matter much to us, and instead started focusing on quality experiences. If and when we decide to retire, we already know how to live below our means and that real happiness has nothing to do with what we own. Finally, the richness of our life has absolutely nothing to do with what anyone else thinks. That's why it is probably SMART to remember that simplifying your life, getting rid of the clutter and rightsizing is the best possible thing you can do for your retirement.