It's an important question for all parents to ask, and unfortunately, the answer can be troubling.

According to a new report, "Alarming Dangers in School Zones," school zones can be unsafe places for students.

With support from FedEx, we recorded the behavior of 39,000 students crossing the street in school zones, as well as 56,000 drivers during drop off and pick up.

What did we learn? Eighty percent of the middle and high school students we observed did not cross the street safely, meaning they crossed the street while distracted by their devices, were wearing headphones, crossed mid-block or exhibited some other form of behavior that put them at risk. At the same time, nearly 1 in 3 drivers displayed unsafe behaviors that endangered pedestrians, like texting or blocking a crosswalk.

With teen pedestrian death rate on the rise, increasing by an alarming 13 percent since 2013, we must rally our communities to take action to protect kids as they travel to and from school and throughout the entire day.

We can all play a role in keeping kids safer in school zones and prevent crashes that claim the lives of five teens every week.

As communities, let's identify high risk school zones and pursue proven interventions, like crosswalks, appropriate speed limits, visible signs, crossing guards and traffic lights. This is particularly important since low speed limits (at or below 20 miles per hour) were observed in only 4 out of 10 school zones, and marked crosswalks were missing in 3 out of 10 crossings.

As schools, let's implement and enforce school policies regarding drop off and pick up of students since we know it leads to safer driving habits.

As drivers, let's put an end to distraction while driving and commit to slow down to at least 20 miles per hour in school zones. We know reducing your speed greatly improves the chances of survival in a crash. 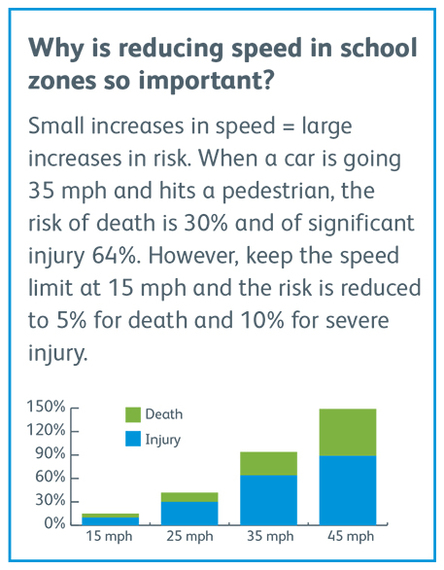 As parents, let's model good behavior and teach our kids about how to walk safely, the importance of not crossing mid-block, and avoiding distractions such as texting or talking on the phone. And let's start these conversations when our kids are young and keep emphasizing the point as our kids grow older. Our data shows that our teens are at greater risk of injury.

In 2015, 456 child/teen pedestrians were killed in a crash. That's a tragedy. We are calling on everyone to take action so kids are protected as they walk to and from school and in their communities.