San Francisco, once the epicenter of the HIV/AIDS epidemic, has since made great strides in reducing HIV transmission and implementing prevention policies. On this year's World AIDS Day, San Francisco's Getting to Zero Coalition unveiled a draft strategic plan, which aims to make San Francisco the first jurisdiction with zero new HIV infections, zero stigma and zero deaths.

"It's important. You have to have a vision and a strategy for how to implement [that vision]," said Diane Jones, a nurse at San Francisco General's Ward 86 and one of the presenters at the World AIDS Day forum.

The strategic plan is "an organizing principle for directing one's resources and effort," said Dr. Diane Havlir, one of the co-founders of the Getting to Zero Coalition and professor of medicine at UCSF. She noted that the plan has a specific target for HIV infections: to reduce new HIV infections by 90 percent by 2020. Though similar targets do not yet exist for the number of deaths and stigma around HIV, Dr. Havlir said that the coalition is working on building a framework that looks at both. Specifically with regard to stigma, the coalition will look at ways with which to measure stigma.

There is a three-pronged structure to the plan for it to achieve its goal: expansion of PrEP, increasing the reach of the RAPID program and retention in care.

PrEP, or pre-exposure prophylaxis, currently comes in the form of a once-daily pill, Truvada®, taken to prevent an HIV infection. PrEP is recommended for those who are at high-risk of contracting HIV. Dr. Susan Buchbinder from the San Francisco Department of Public Health and Dr. Brad Hare from Kaiser Permanente, San Francisco, presented available PrEP data during the forum. Studies have shown that PrEP can be up to 92 percent effective in preventing HIV if taken as prescribed.

"PrEP does work and it works really well, but you have to take it in order for it to work," Dr. Buchbinder noted in her presentation. Currently, Truvada® is recommended once daily and a study is underway to test intermittent use of Truvada® for HIV prevention.

San Francisco has been testing a small program to deliver rapid antiretroviral therapy to newly-diagnosed patients. Through San Francisco General Hospital, newly-diagnosed patients who would like to begin treatment can access treatment the same day they are diagnosed. Dr. Havlir said that the program "essentially sets up a situation to overcome logistical barriers for people to start on therapy so they can start immediately." San Francisco changed its policy to provide early treatment to all who tested positive for HIV in 2010, a move that was seen as controversial by some. But by 2013, international and national guidelines had changed to follow suit. San Francisco's RAPID program is featured in this month's TIME magazine and was featured earlier this year in The Advocate.

Though only about 50 participants have gone through the RAPID program as of now, the coalition wants to expand the program so that anyone diagnosed with acute HIV or advanced HIV can begin treatment within 48 hours of their diagnosis and anyone else who is newly diagnosed can start treatment within five days.

The final prong of the coalition's strategic plan is ensuring that those who need treatment and care continue to receive it. The HIV care continuum is a model currently being used to understand the different stages of HIV treatment and care: from getting tested to accessing antiretroviral therapy to achieving a suppressed viral load, which means less risk of HIV transmission. Dr. Havlir noted that the care continuum now allows HIV prevention experts to differentiate and analyze all the steps involved and to determine the gaps and challenges at each level to better address them.

Dr. Havlir noted, "A person, at different phases of their life, has different types of coverage that require them to access healthcare in different healthcare systems. Right now, the system depends on the person being able to navigate that." Retention becomes difficult when people can't navigate those systems, and navigation can prove difficult for a variety of reasons, from lack of access to other structural and/or behavioral barriers.

San Francisco is already making progress when it comes to HIV prevention, treatment and retention. In 2006, San Francisco had 517 new HIV cases; by 2013, that number dropped to 359, a 30 percent decrease. The number of deaths almost halved between 2006 and 2013, going from 327 to 182. Additionally, compared to the United States, San Francisco is faring better in multiple aspects of the HIV care continuum: in 2012, 82 percent of HIV positive individuals in the U.S. were aware of their status; in San Francisco, that number was 94 percent. Of those who were positive, 66 percent in the U.S. were linked to care while 72 percent in San Francisco were linked to care. And while only 25 percent of HIV positive individuals in the U.S. had a suppressed viral load, 63 percent of positive San Franciscans were virally suppressed. But more needs to be done. As presenters noted during the forum, there has been an increase in HIV infections between 25 and 29 year olds and HIV impacts young men of color disproportionately. It is for this reason that a community-oriented approach to HIV prevention is crucial. Dr. Havlir noted that the gaps and challenges that the consortium is identifying cannot all be solved by the public health department alone but rather, through an investment from a variety of sectors and stakeholders. For her, that's a fundamental concept of the consortium's work. "It's very important in this effort that our strategic plan and efforts are vetted through the community," Dr. Havlir added, "so [that] this is not just the ideas of a small group of individuals but a community grounded effort to move forward in this direction."

Photos from the World AIDS Day Forum in San Francisco 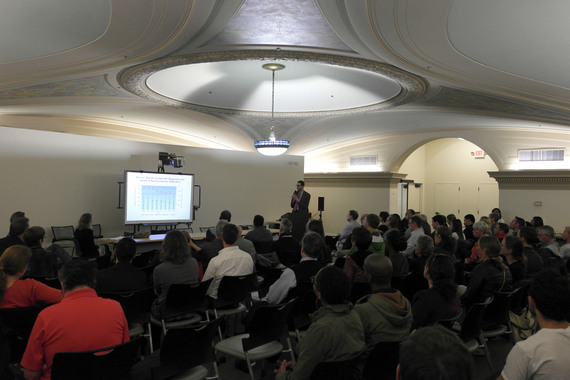 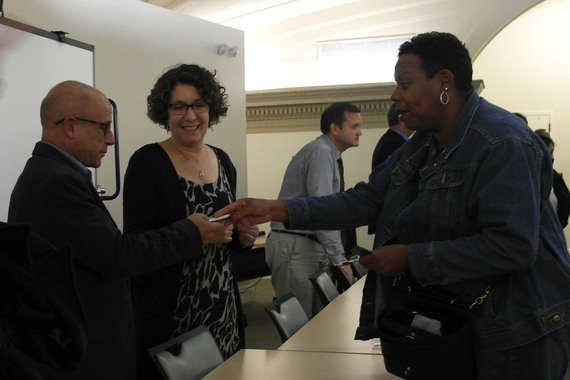 Presenters at the World AIDS Day Forum chat with an attendee. 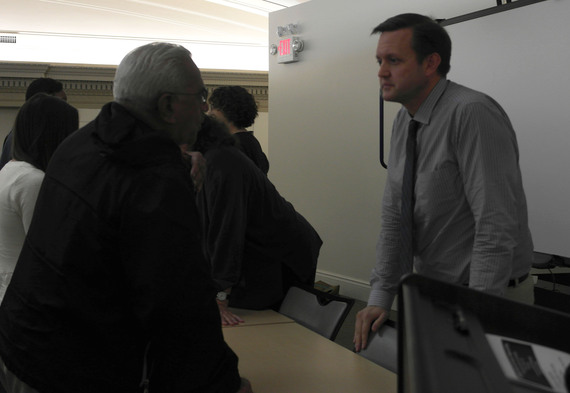 The views expressed herein do not necessarily reflect the official policies of the City and County of San Francisco; nor does mention of the San Francisco Department of Public Health imply its endorsement.