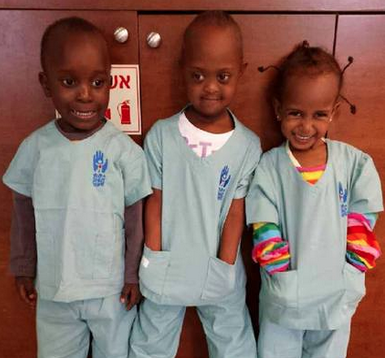 Children at "Save A Child's Heart" dressing up as doctors after their heart surgeries.

I walked through the gate on my first day of work, automatically captivated by the translucent red, blue and green windows staring back at me. Before I could take another step further, I felt tiny warm arms wrap around me. "I love you" she said to me, with the most genuine smile I had ever seen.

"I love you too" I told her, as I hugged her back. We both meant those words, even though we didn't know each other's names. She had a large scar that ran across her chest, poking out from her blue tribal print dress. At first, I tried not to notice her scar, afraid that it would make her feel self-conscious. She must have sensed my nervousness, because she quickly took my hand, held it up to her scar and said, "I just had heart surgery last week."

A young woman around my age overheard our conversation and walked up to us. "This is Monica. All of the children here at Save A Child's Heart are proud of their scars. They never try to cover it up," she said to me.

After training for my position, I spent the rest of the day playing with the children who were here in Israel from different parts of the world. Some children were from Tanzania, others were from Zanzibar, and one child was from Romania. All of these children came to Israel from developing countries in order to get heart surgeries for free. Without surgery, none of them would have survived.

A doctor from Tanzania came up to Monica and me after his shift ended. He was still in his scrubs, but decided to sit down with us anyway. He explained to me that the reason that these children come to Israel to get operated on is because the surgeons in their countries are not trained to carry out such complex heart surgeries. Save a Child's Heart (SACH) brought him, as well as other doctors from developing countries to Israel, so that they could train them. He was so proud of his country and couldn't wait to go back home to save more lives.

I felt my heart break and expand at the same time as I tried not to think about what these children's fates would have been if they weren't able to get operated on.

While we were making arts and crafts, I saw a young boy from Ethiopia arrive with his mother. They had just landed in Israel a few hours earlier, and were ready to prepare for his upcoming surgery. He couldn't run like the rest of the children, and his lips were dark blue. He tried to manage a smile, but instead, yawned and needed to go upstairs to his new bedroom to rest. I couldn't believe the difference between this young boy and Monica!

"I looked like that too when I first got here but then the doctors saved my life. Can I play a game on your iPhone?" Monica asked, after the little boy went upstairs. And so the spell was cast -- I was in love with this organization and the children whose gratitude was contagious.

I spent the next day getting a tour of their hospital, Wolfson Medical Center. I visited the weekly clinic that SACH has every Tuesday for children from the Palestinian Authority. For me, this was one of the most significant parts of my work at SACH. I met families from Gaza and the West Bank, as well as one child who was originally from Syria. Many of the children's parents explained to me that they were initially afraid to come to an Israeli hospital and be operated on by Israeli doctors due to the political situation in the Middle East.

Boundaries and tensions held no weight at the clinic, because SACH believes that all children have the right to live. I asked one of the mothers from Gaza if her opinion of the conflict changed, and she told me that she will never be able to forget that Israeli doctors gave her son his life back.

I often think back to my first few days at Save a Child's Heart, being embraced by Monica, who told me she loved me before she even knew me. This organization has taught me that love and action can save a life. Fighting for a child who doesn't speak your language or eat the same foods as you do, or have the same dreams that you have -- can save a life. It can make a child proud of their scars and it can make you proud of your own.

Save a Child's Heart is in the midst of their annual "Give Your Heart Out" campaign through the end of February, inspired by Valentine's Day. All of the funds raised will go towards saving a child in need of heart surgery. To find out more, visit here. 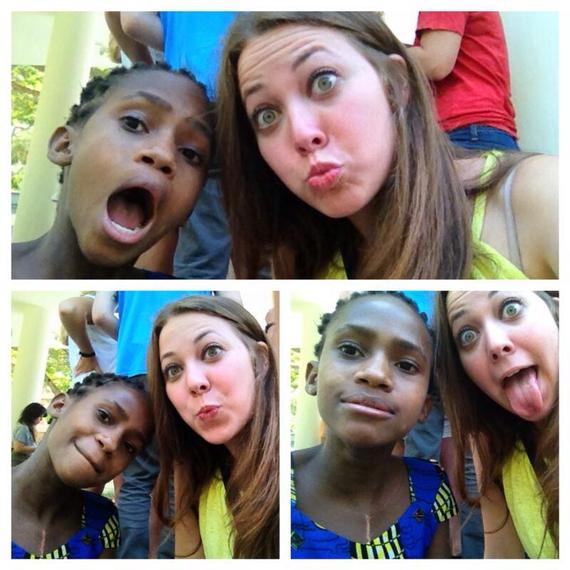 Monica and I making funny faces during my first day at SACH. She has since returned to Tanzania and is in excellent health! 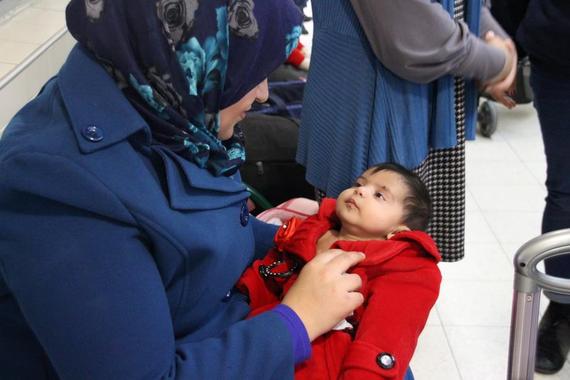 Tiny Kamar and her mother arriving to SACH from Gaza.

Here is a video about the "Give Your Heart Out" campaign.

This article was originally published in The Jerusalem Post.