Yellow-tailed woolly monkeys are among the rarest animals on earth. For eons they have frolicked and flourished in the lush forests of South and Central America. But like so many other organisms, they don't seem to be able to adapt to the degraded and contracting environment human beings have left with them. As their habitat is steadily compromised, they slowly disappear. Today this remarkable creature is threatened with extinction. 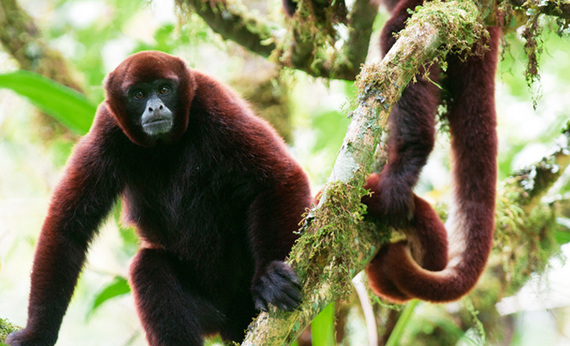 The yellow-tailed woolly monkey is indicative of so many species that face obliteration during these troubled days, a period scientists are now calling the "Sixth Extinction". Since the dinosaurs were pushed off the stage by cataclysmic changes wrought by a meteor, the world hasn't seen such massive loss in wildlife. In many ways, we Homo sapiens, with our gospels of progress and proliferation, have become a force of destruction. The situation is so grave that it often leaves good people, who care deeply about the planet, with a certain sort of paralysis.

What is one to do during such trying times? How can we avert the pervasive sense of helplessness or not lapse into the safety of cynicism when faced with a planet gone awry? How does one begin to a cobble together a meaningful response to a World Wildlife Fund 2016 study reporting that half of the earth's wildlife has disappeared over the past 40 years due to human activities? With a climate change denier soon running the U.S. EPA, American foreign policy overseen by an Exxon chief executive and the Department of Energy run by a Texas politician who pledged to shut the place down -- despair is hardly an irrational response. But that's far too easy a cop out.

The truth is that the yellow-tailed woolly monkey's future has not yet been settled. Trend does not need to be destiny. Humans also have the ability to project ahead; work together; be compassionate; heal; restore; and choose between good and evil. That's why I find significant consolation in a new ecological initiative that allows every person on the planet to help save endangered species by purchasing the lands they call home.... starting with yellow-tailed woolly monkeys.

For about a year a new organization: "This is My Earth" (TiME) - has introduced crowdsourcing to help buy habitats in so-called ecological hotspots. Nearly half of the planet's species live on 2.3% of the planet's surface. Frequently, these lands are owned by private individuals who are very happy to sell them to environmentalists, rather than turn them into farms, houses and strip malls. This is not a new idea. For years, wonderful organizations like the Nature Conservancy have been doing critical work saving habitats.

But the traditional way that civil society purchases sensitive lands leaves little room for normal folks, without significant philanthropic muscle to lend a hand, much less participate in decision making. TiME is designed entirely differently. Membership can be purchased for as little as one Euro in order to enable poor communities, school children, and people in developing countries a voice. A scientific committee of leading ecologists from around the globe vets proposed sites. Those where local capacity to manage a conservation area is confirmed and the ecological benefits deemed sufficient become candidates for support. Then TiME members from all over the world read about them, vote on-line (one vote for all regardless of donation size) for their preferred option to preserve and crowdfunding provides the cash.

Sometimes democracy actually works. When the votes were tallied up this year - the site chosen to be most critically in need of protection is the El Toro forest in the Amazonas region of Peru. It turns out that this remote region may be the only place in the world where the population of yellow-tailed woolly monkeys is increasing - indeed the depleted numbers there grew about 30% in recent years.

The problem is that the magical rainforest where the monkeys live is privately owned. And the incentive to develop is relentless. Luckily, this is a problem that is easily solved. The local chapter of Neotropical Primate Conservation (NPC), working with the adjacent community have arranged for a land purchase. Now all that remains is to raise an additional 25,000 dollars from the public and the habitat can be set aside for future generations --of humans -- and more importantly yellow-tailed woolly monkeys. Indeed, Indiegogo's new non-profit platform "Generosity" makes this sort of campaign relatively simple.

Whether it is the Christmas message of Giving - or the Hanukah message of keeping a flame of hope burning, the gift of a more promising future to the yellow-tailed woolly monkey is in the best spirit of this holiday season. Humans increasingly realize how much of our DNA we share with the animals on this planet. We also must learn to share critical places, like the El Toro forest in Peru, with the only other creatures with who we share creation. As always, great journeys begin with a single step--a single species. By saving monkeys and their home, our species show that we humans can do better.