Once again, even Americans can not stand up to a small group of settlers, who show - more often than not - that they have the last word on what takes place in the West Bank. This time, a small group of settlers insisted, and succeeded, to squash a plan for building a hospital for Palestinian children at "Oush Grab" ("the Crow's Nest") east of Bethlehem.

The sequence of events in this case is a good example of the way things work in the Occupied Territories: the settlers apply political pressure (as well as threats of violence), the army gives in, and that is how Israel's official policy is made. If you want to understand why it is so hard for the Israeli government to remove a checkpoint, let alone illegal outposts, read the following story:

Chapter One: the land is seized for military use In the early 1970's, the IDF built a military base on the land of "Oush Grab," and called it "Shdema Camp." It overlooked the picturesque Palestinian town of Beit Sahour, east of Bethlehem. The IDF's Central Command Commander at the time issued a seizure order for some 54 acres, according to which the land, under private Palestinian ownership, was needed for military security needs. According to the order, the land owners were entitled to receive from the IDF land use fees (to compensate for temporarily losing access to the land), and when the military need ended, the land would go back to its owners. In 1983 the order was expanded to include another 34 acres.

In 1995, when the Interim Agreement ("Oslo II") was signed between Israel and the PLO, it determined that the area of the military base would be under Israeli control (area C) until the final status agreement (which, under the agreement, was supposed to be signed within five years). In 2004 Israel's authorities started building a bypass road for those settlements, to allow the settlers a short and comfortable ride to Jerusalem, without needing to go through Palestinian villages. The road, which opened for traffic in 2008 and ran beneath the lands of "Oush Grab" was nicknamed the "Lieberman road," after minister Avigdor Lieberman, who lives in the settlement of Nokdim and was a cabinet member when the decision was made to invest millions in building the road. 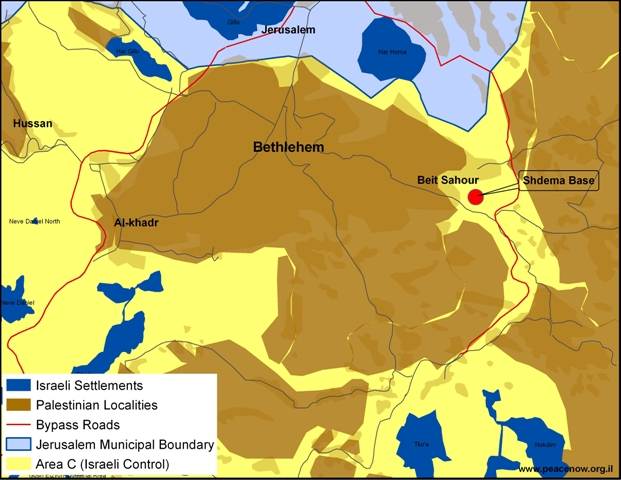 Chapter Two: the end of the military need In 2006 the IDF decided to dismantle the military camp and reduce the seizure order to only 0.06 acres, on which a "pillbox" guard tower was supposed to be built to oversee and protect the bypass road. The township of Beit Sahour, which needed land reserves and public space, hoped to finally be able to use the evacuated land for the benefit of its residents, and build a children's hospital on it. The American administration promised to help fund the hospital through USAID, but since the area is defined as "area C" and officially under Israeli control, Israel's permission was needed to build the hospital.

Chapter Three: the settlers establish facts on the ground Following reports that Prime Minister Olmert had approved the hospital, a group of settlers, led by the radical Women in Green organization, raised an outcry and launched a campaign supported by the regional council of settlements, to prevent the land from being transferred to Palestinian hands. They started a persuasion campaign among decision-makers and in the press, and even declared a number of times they were building a settlement on the site. They invaded structures the IDF left at the base and started to hold regular activities there, such as weekly religious classes, lectures, movies and demonstrations - usually under IDF protection. Occasionally they clashed with residents of Beit Sahour (recently, offensive graffiti was sprayed on installations at the nearby Palestinian playground). The army had to protect the Palestinians and the settlers from each other.

The excuse, as usual, is security: according to the settlers, building a Palestinian hospital will endanger the settlers driving on the "Lieberman Road." And so the tables were turned: the military need that led to building the base persisted for many years before the bypass road was built. Right after the construction of the road began, the IDF decided to dismantle the base and leave an outlook point there instead. But for the settlers, the new road supplied a new excuse for the military need to keep the area under Israeli control.

Chapter Four: the IDF gives in For the IDF, securing the settlers events on the ruins of the Shdema Camp was a major headache, as was the need to defend the Palestinians from the settlers. Ultimately, the IDF got tired of playing cat and mouse with the settlers, and decided to rebuild the military base at Shdema.

For now the settlers won - they don't even have to go to the trouble of building a new settlement at the site. The IDF will do the work for them and make sure the land is not handed over to the Palestinians.

According to the testimony of parties involved in this matter, the IDF's excuse is not the need to protect the settlers on the road from potential attacks (the area has been very quiet in recent years, and no events even of stone throwing have been recorded), but actually the need to protect the Palestinians from the settlers who keep coming back to the site, and prevent friction.

Shdema is not a rarity. This is how it has worked in the territories since 1967. The dynamic was similar in Hebron, Sebastia, and the illegal outposts: the settlers establish facts on the ground, apply pressure, threaten violence, and the IDF and the Israeli government give in. The ones who decided this time to give the IDF another military mission and erect a military outpost that will require protection, infrastructures and supplies, the ones who decided that again Israel would look cruel and inhumane, by preventing the Palestinians even from building a hospital, and the ones who decided it would be the government of Israel that would destroy a project in which its closest friend, the U.S., decided to invest money and energy - are a handful of extremist settlers, who know just how to apply pressure and dictate Israel's policy.

The settlers do not hide their satisfaction. Recently they sprayed a new graffiti in the site welcoming the IDF: 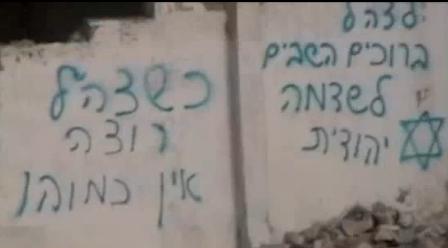 "When the IDF wants - he is the Best!", "To the IDF, Welcome to Jewish Shdema"