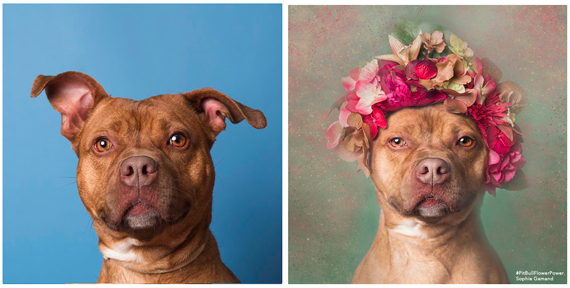 Of the approximate 3.9 million dogs that enter the shelter system, about 1.4 million, or 1 in 3, make it out. The statistic for pit bulls is not as optimistic with some findings stating only 1 in 600 will be adopted, with the rest being euthanized.

An award-winning photographer has made it her mission to change these stats. Last year, French-born Sophie Gamand began a project to change the perception of pit bulls, a breed that is often deemed dangerous, violent and aggressive. Calling it Flower Power: Pit Bulls of the Revolution, New York City-based Gamand created the series to show pit bulls in a softer light -- portraying them to look like "hippies, soft fairy-tale-inspired characters, feminine and dreamy." To achieve this, she places homemade floral crowns on shelter pit bulls and poses them against pastel backgrounds in hopes viewers see the breed's true beauty, not the negative stereotypes often associated with them.

Her passion project seems to be paying off. Approximately half the pit bulls have been adopted, a rate much higher than the above mentioned national average. She has also helped shine a light on the bigger problem of prejudice against pit bulls, as her series has made its way onto hundreds of online media publications, while also capturing the attention of big-name outlets including BuzzFeed, Huffington Post and Oprah Magazine.

"After the first images received such a positive reaction from people and went viral online, I realized I had developed a wonderful marketing tool for pit bulls and maybe this series could help make a difference," says Gamand.

She is now considering going beyond New York and traveling across the country to visit shelters and gather more stories.

And while the dogs play a major role in the series, Gamand also deserves credit for creating such beautiful images.

When Gamand recently visited the Hempstead Town shelter to photograph pit bulls, including a red one named Apple, we went behind the scenes to see how she works her magic.

It all begins with a suitcase. 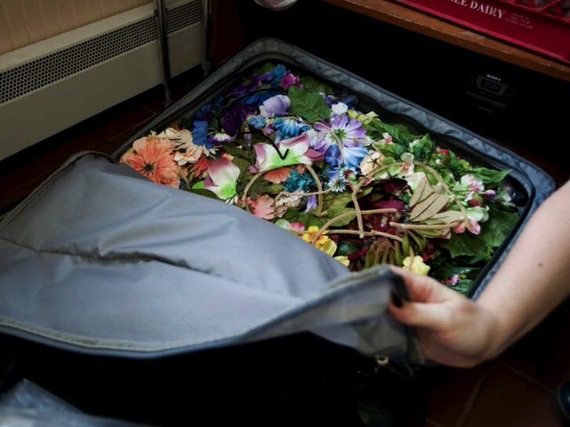 Hundreds upon hundreds of synthetic flower petal crowns travel with Gamand on her shelter trips to ensure she finds the right look for each dog. "I want to make sure every crown is different; I look for inspiration in the flowers, she says. 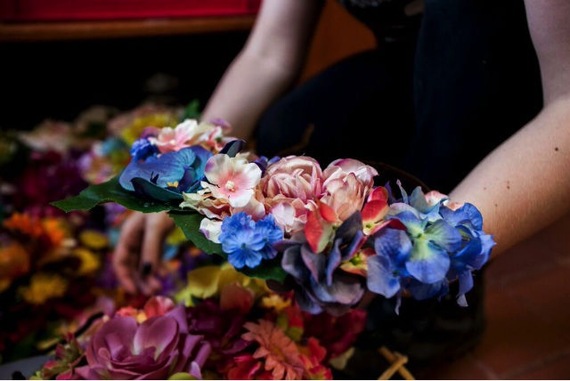 Each crown takes between 30 minutes and an hour to make but that doesn't necessarily mean they will be used. "If I don't like them, I don't use them."

Setting the stage for the impromptu photo studio 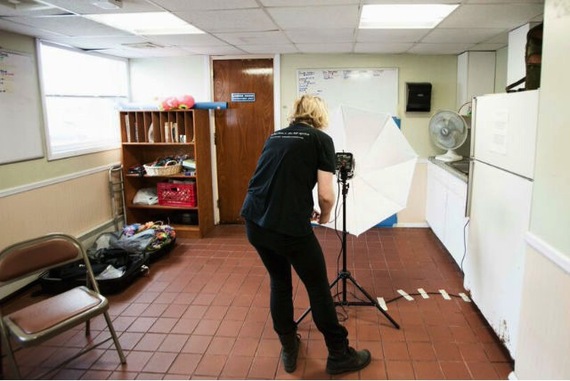 While the end shot is stunning, the actual setting is a no frills, bare bones environment. Almost all the shoots happen at the shelter and Gamand needs to make the most of her tight quarters. To do so, she sets up a backdrop (any color will do), lighting and other photography equipment to help set the scene.

Having her trusty camera is key 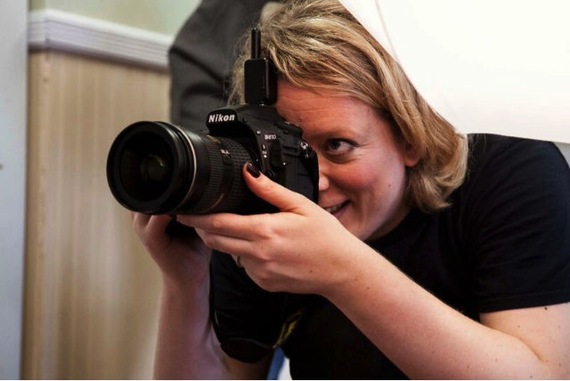 Every photographer has a favorite camera and for Gamand it is a Nikon. "My camera is like my baby!"

Choosing the guest of honors 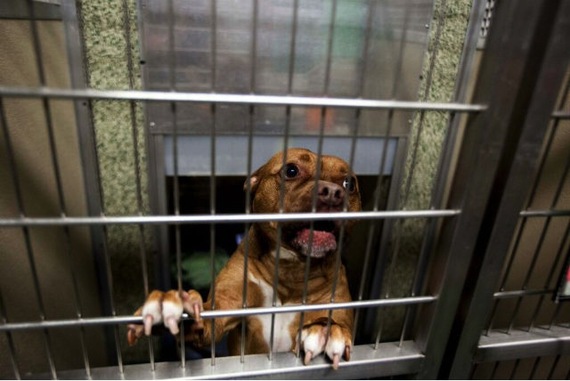 "These shelter dogs go through so much and their daily life is not always fun," Gamand says. "The photo shoots are breaking their routine, and they are stimulating." 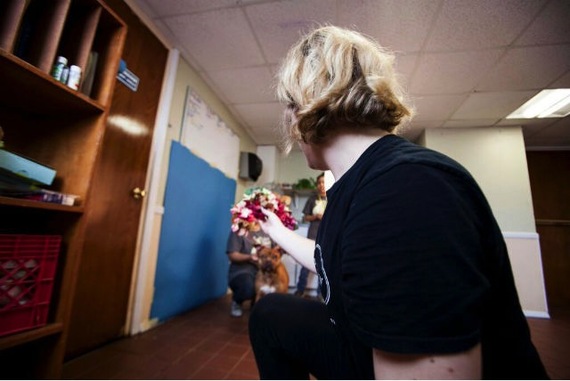 Not all crowns work for all dogs and some pups can be trickier than others. 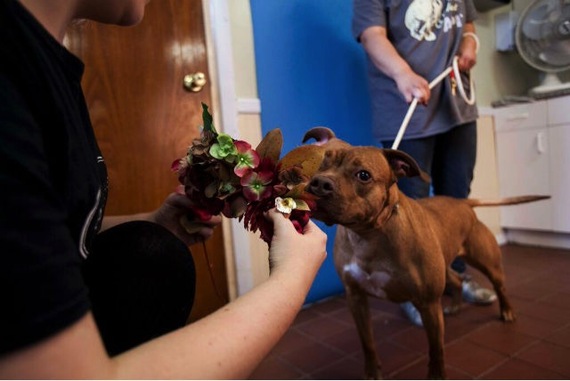 "Each dog has a different shape of face," she says. "Pit bulls have often have big cheekbones so sometimes I struggle to find a crown that will fit nicely." 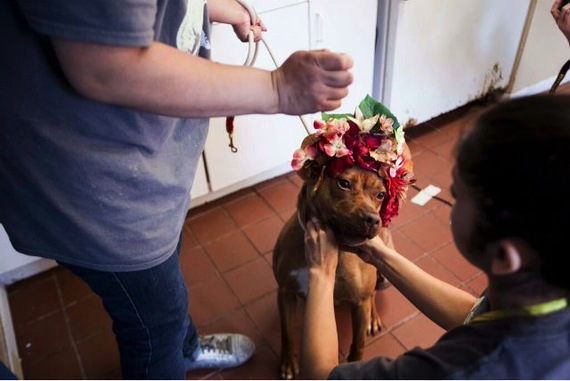 She not only looks for flower crowns that fit in terms of size but also shape, color and mood. "A lot goes into choosing the perfect crown for each dog." 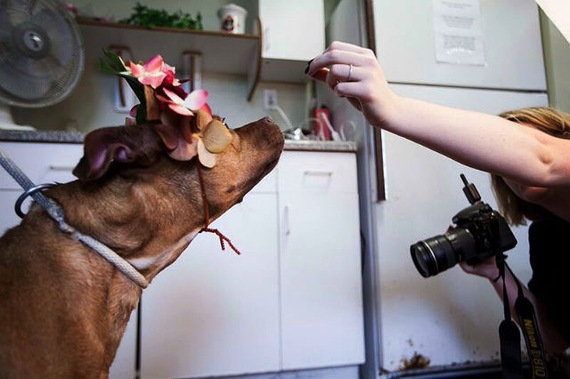 "I love when a dog understands what we want and does it, then gets all excited when they get the reward for it. They are so proud. It's beautiful."

Finally, the real magic is revealed. 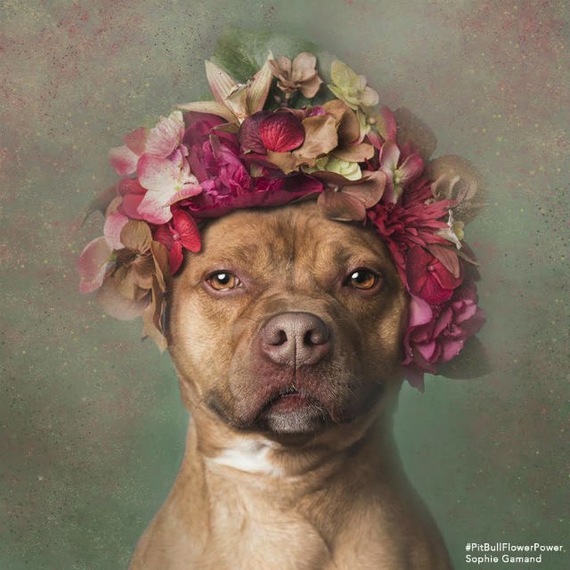 Once the shoot is complete, Gamand heads back to her home and digitally paints on the image. And voila another Flower Power image is born - and hopefully another overlooked dog gets adopted.

"They [the images] have gone places and every day people express how touched they are. To me that's where the magic is," says Gamand. "Not how I made them but how they are bringing everyone together. These are not just dogs wearing flower crowns; something much bigger is happening, slowly. But hopefully, surely!"

If you want to learn more Gamand and her work, check out the prints she has available on Striking Paws. You can also keep tabs on what she is working on next (her Wet Dog book is coming out soon) by following her on social media channels including Facebook, Twitter and Instagram, where she has 43,000 fans and counting.

All images taken by Colby Blount

This article originally appeared on This Dog's Life, a discovery platform highlighting amazing brands while providing dog lovers original, local and national content along with curated stories from across the web. Please follow us on Facebook or Twitter.