Last weekend, something unthinkable happened: I left the kids at home with my husband and took a girls' trip to Napa. Overnight.

Usually, "vacations" involve packing up all four of us and making a luggage-laden trek toward a child-friendly environment, often staying with family to save a buck.

But not this time. This was uncharted territory, freeing and kind of terrifying, something I'd planned with one of my best friends while I was still pregnant with the baby and lamenting the absence of wine.

"We will go to Napa!" she declared triumphantly. "And we will have wine. Flights and flights of wine."

On some level I assumed it wouldn't happen. I couldn't actually leave the kids overnight. After all, I would still be nursing. And what if something terrible happened while I was two hours away? No. It was a pipe dream.

But then my friend reserved a hotel. I compiled a packing list that somehow did not include extra diapers or Sophie the Giraffe. And suddenly I was kissing my family goodbye, wearing a mint-green mini dress (because for the first time in seven months, there was no need for a nursing tank!) and a pair of wedges adorned with spikes (because practical shoes, be damned!) and actual makeup on my face, which became just a tiny bit tear-smudged as I drove away to spend 24 hours without my babies. 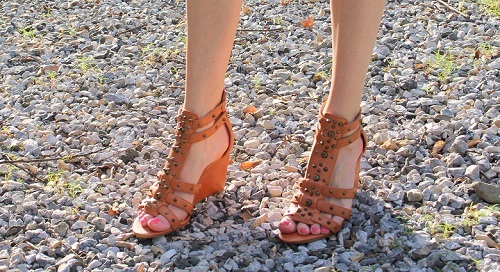 Halfway to Napa, I realized I'd forgotten to bring toothpaste. No big deal -- Target to the rescue, of course. When I placed my travel-sized tube of Crest on the conveyor belt, the cashier gave me a friendly, inquisitive side-smile. "Is this it?" she asked.

I am the admitted owner of a relatively unapproachable RBF. My introvert side does not encourage small talk, and would certainly not initiate it. But today, buoyed by the anticipation of wine and friendship, I morphed into a bubbly, grinning chatterbox. I had plans, okay? PLANS.

"Yep, just the toothpaste!" I chirped. "It's so weird. Normally I'd be buying boxes and boxes of baby wipes or something, but today I get to take a little mommy vacation."

"Nice," she said, making polite conversation. "Where are you off to?"

"Somewhere I can drink, obviously!" I laughed and handed her some money. "I'm meeting a friend in Napa."

The cashier smiled blandly, but a woman behind me in line let out a short chuckle. Her eyes traveled down past my exposed thighs, came to rest on my spiky shoes. "Is that really how a mom should behave?" she asked lightly.

She said it with a lilt of confidentiality in her voice, as if we were secret friends. Her tilted head and wrinkled-up nose seemed more curious than unfriendly. She has to be joking, I thought, so I shrugged and said, "We'll see!" as I accepted my change.

But her words followed me out to the parking lot--by the time I got back on the road, I had rummaged through my duffel bag and switched into a pair of benign flats, which made me feel vaguely more "mom-like" (and were MUCH more comfortable for driving, okay? Score one for you, Target Lady). With my spiky shoes stowed safely on the floor of the passenger seat, I spent the remainder of the drive considering her question.

How should a mom behave?

I couldn't Google the rules right then. I mean, I was operating a motor vehicle. Was there some antiquated Emily Post-esque handbook I was supposed to have read? Was a girls' trip to wine country the real-mom equivalent of Kim Kardashian's censor-bar selfies?

There was no way to be sure, but just in case there weren't any "mom behavior" guidelines, I decided to follow three of my own.

A mom should behave with the best interest of her child in mind.

I bet you have this one in the bag. We are forever making decisions about sleeping, feeding, schooling, and discipline, and there are probably very few parents who might say, "Ah yes, I made that choice because I hoped it would be seriously and irrevocably damaging."

Sometimes our decisions are relatively innate: No, you may not consume an entire tub of gourmet jelly beans in one sitting. Yes, you must in fact bathe after finger painting with the dog's excrement.

Other times our decisions are HARD, but we make them anyway because we believe in doing the best thing for our child.

Okay, and sometimes we just choose the thing that will make our lives easier. But you know what? Less stress equals a happier mama, which is -- hey, look at that! -- in the best interest of our kids.

A mom should behave unburdened by the expectation of perfection.

You tell your children: "It's okay. Everyone makes mistakes."

Well, so do we. And it's time to be kind to ourselves.

Despite our best intentions, not every decision will end up being the "right" one. Sometimes we screw it up. Sometimes we won't even know we've screwed it up until several years down the road, which is one of the scariest things about being a grown-up: now our mistakes are adult-sized. One day we may wake up and realize we've chosen the wrong city, the wrong career path, the wrong marriage.

But don't let the fear of making the wrong decision paralyze you into making no decision at all. That's a lesson I'm still trying to master, and it's taking me forever because I'm definitely not perfect. Neither are you.

And that's better than okay -- it's actually kind of beautiful.

A mom should behave in ways that remind her she is more than just a mom.

Motherhood is one of the very best pieces of me. But it's only one piece. I mean, on the Pie Chart of Pieces, it does swallow up an inconceivably enormous wedge -- but there are some other slivers and slices in there, too.

We're allowed to remember those.

When your child was just a little sparkle in your eye, you did stuff, right? You enjoy music, so you bought concert tickets. You're a foodie, so you looked forward to Restaurant Week. You sat in a movie theater, you went running, you kept a garden, you binge-watched Orange Is the New Black. But now that you're up to your elbows in diapers, nap schedules, soccer games, dance classes, and jiu-jitsu lessons, your needs have been buried somewhere beneath burp cloths and triangular PB&Js.

Last weekend, armed with one good friend and a flight of Napa's most interesting bubbly, I behaved the way a mom should.